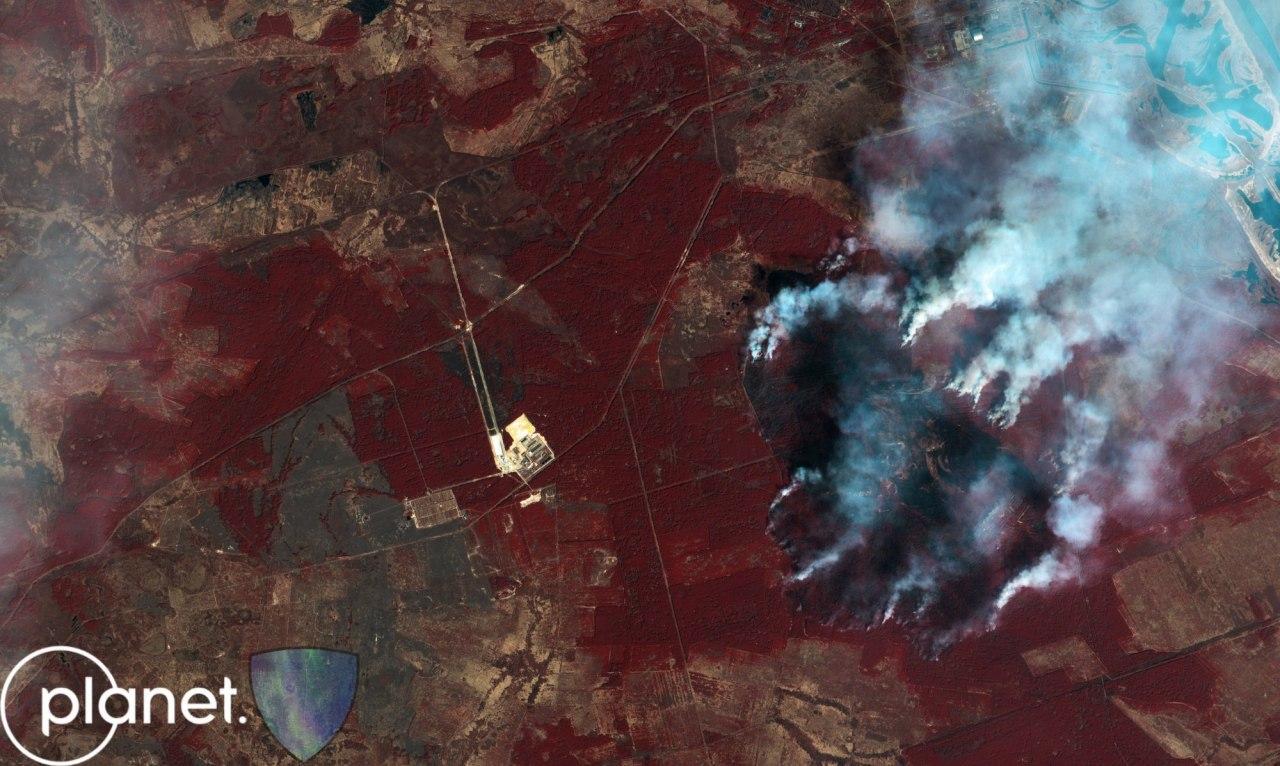 The fires that have been burning in Northern Ukraine are now just about 2 kilometers away from the Chernobyl Nuclear Power plant.

The abandoned city of Pripyat was reached by the fire on April 13th.

The fire is edging closer to the storage facilities for radioactive waste.

“The situation is critical. The area is blazing. Local authorities report that the situation is under control, but the fire captures new territories. I have two options: either the cabinet is not brought up by the real situation, or he chose a policy of silence, like the Soviet regime in ’86,” said a member of the Public Council at the State Agency for Chernobyl Management, Yaroslav Emelianenko.

He appealed to the President’s Office, directly to the head of Ukraine Vladimir Zelensky, Prime Minister Denis Shmygal and Interior Minister Arsen Avakov with an appeal to tell citizens what is really happening with the fire.

On April 9th, the surroundings of the Chernobyl nuclear power plant can be seen on the photographs below and above.

The fire, which caught on the 9th, approached a distance of 200 meters to the Chernobyl Nuclear Power Plant. 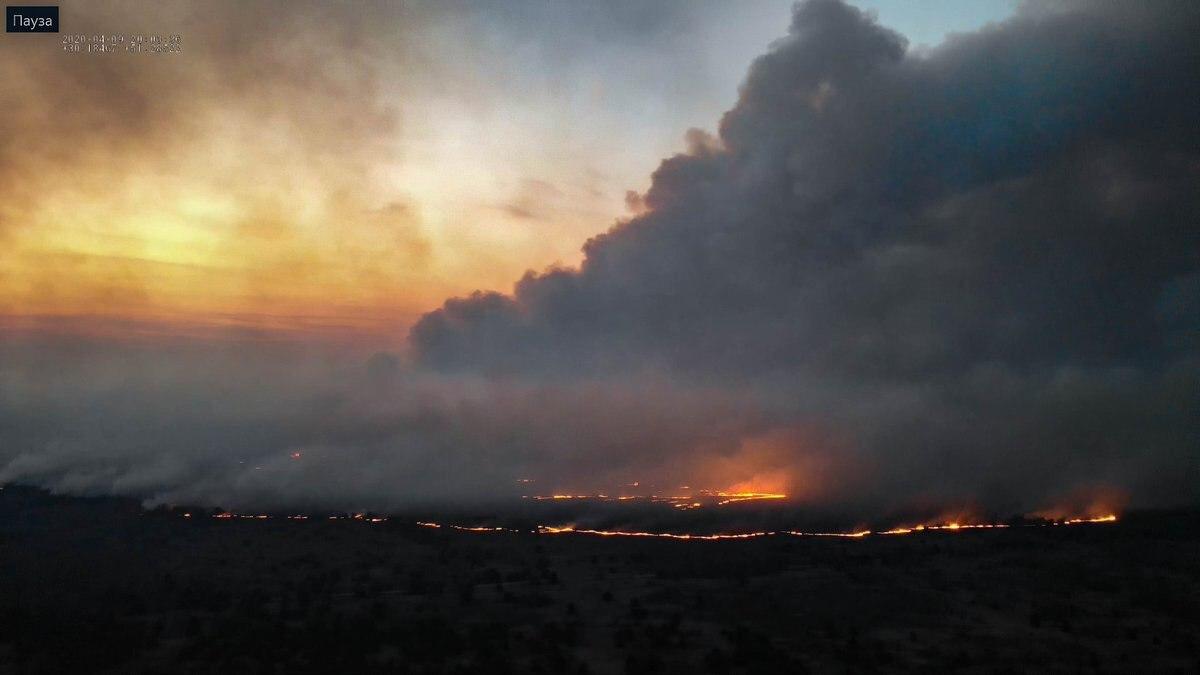 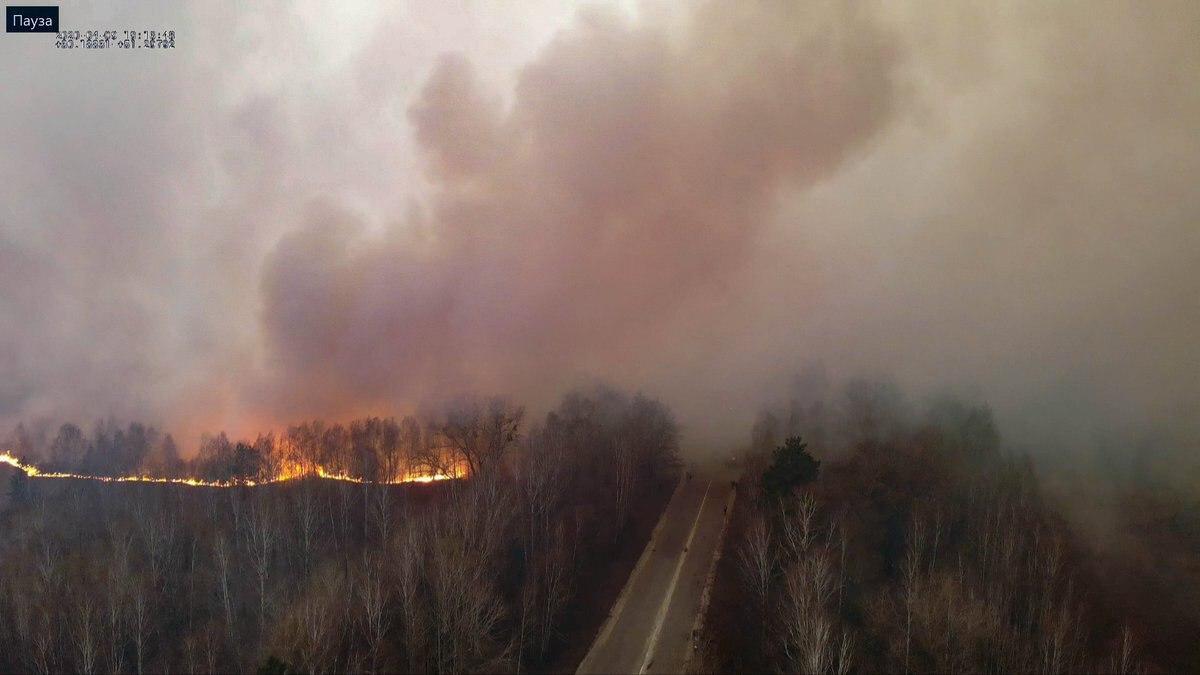 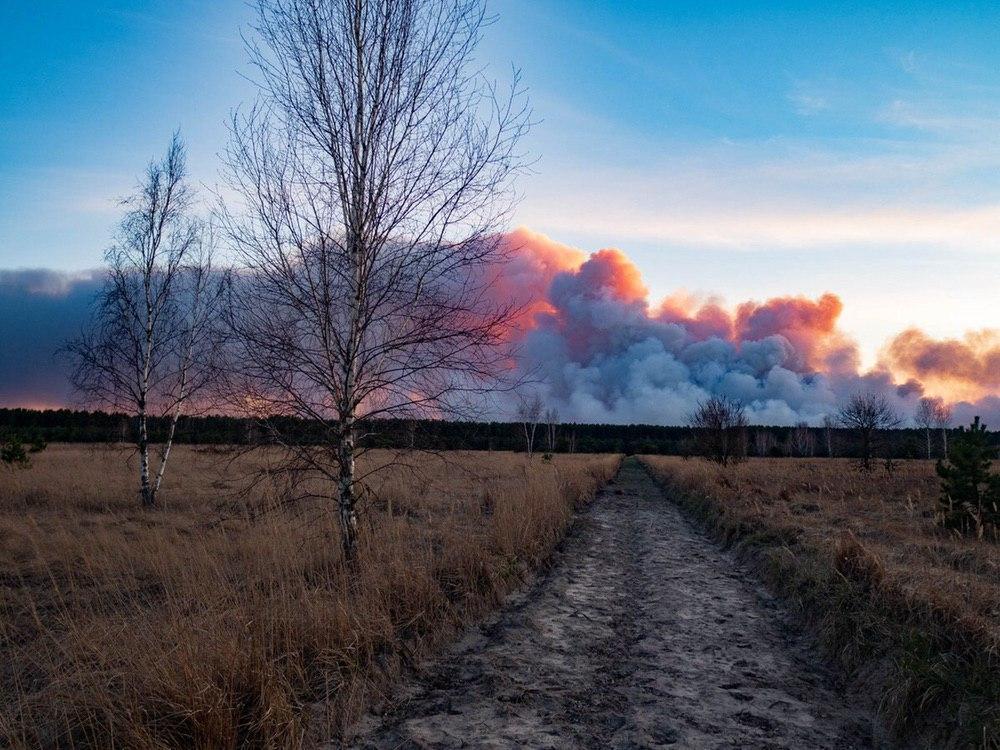 The fire has already destroyed 12 abandoned villages, 415 people, 98 pieces of equipment, including aircraft, are involved in the fire. Firefighters say they are in control and the fire should not affect both the covered 4th power unit and the rest of the buildings of the former Lenin station.

Greenpeace said the fires were much bigger than the authorities realised.

The NGO’s Russia branch, quoted by Reuters, said the largest fire covered 34,000 hectares, while a second fire just a kilometre from the former plant was 12,000 hectares in area.

Kateryna Pavlova, acting head of the State Agency of Ukraine on Exclusion Zone Management, told the Associated Press news agency that they “cannot say the fire is contained”.

“We have been working all night, digging firebreaks around the plant to protect it from fire,” she said.

On April 5th, Yegor Firsov, acting head of Ukraine’s state ecological inspection service, said in a Facebook post that radiation levels in the area had risen substantially above normal.

Government officials later rejected this finding, and said the levels in the area were “within normal limits”. Firsov also withdrew his remarks.

“There is bad news — in the center of the fire, radiation is above normal,” Egor Firsov, head of Ukraine’s ecological inspection service, wrote in a Facebook post alongside a video of a Geiger counter. “As you can see in the video, the readings of the device are 2.3, when the norm is 0.14. But this is only within the area of the fire outbreak.”

Meanwhile, in Russia and Poland, no higher levels of radiation have been established.

In Poland, Deputy Director of the Government Security Center Grzegorz Schwysz said that the levels were within normal.

“The ongoing forest fires around the Chernobyl power plant in Ukraine since April 4th do not affect the radiation situation in Poland,” wrote Shvishch on Twitter.

“The readings from the stations for early detection of radioactive contamination do not deviate from the norm and do not indicate the appearance of radioactive isotopes,” he explained.

Police said the fire had been burning since the weekend of April 4th, after a man set fire to dry grass near the exclusion zone. It has since moved closer to the nuclear plant.

The initial fire was a forest area of 20 hectares, then by April 7th it grew to 35 hectares.

On April 5th, Ukrainian law enforcement officers established the identity of the person who is suspected of involvement in the arson in the Kotovsky forestry. A criminal case has been opened. Police evacuated citizens who live in the village of Polesskoye in the Chernobyl zone.

In Russia, the radiation situation against the background of a fire in the exclusion zone at the Chernobyl nuclear power plant remains stable, monitoring of the situation continues, the press service of Rospotrebnadzor said.

“In connection with fires in the 30-kilometer zone of the Chernobyl nuclear power plant in Ukraine, Rospotrebnadzor monitors the radiation situation in the border areas. According to monitoring data, the radiation situation in the Russian Federation remains stable, the excess of the natural gamma background of the area is not fixed,” the statement said.

The disaster at the Chernobyl nuclear power plant occurred on April 26, 1986, when the nuclear reactor of the fourth power unit of the station exploded.

The total area of ​​radiation pollution in Belarus amounted to about 46.5 thousand square kilometers (23% of the total area).

In Ukraine, 50 thousand square kilometers in 12 regions were polluted.

In addition, 19 Russian regions with an area of ​​almost 60 thousand square kilometers and a population of 2.6 million people were affected by radioactive contamination.

Has SF become part of MSM ? Stop getting people into panic – get’em to think instead and provide some evidence. Ukrainian Deputy Interior Minister Anton Geraschenko stated that the fire did not pose any threat to nuclear waste depositories and the Chernobyl NPP. / https://tass.com/emergencies/1144329

It was a fair and balanced article. Greenpeace is known to blow things out of proportion.