The Starbucks consumer perception levels have fallen by two-thirds since the company promised to hire 10,000 refugees. 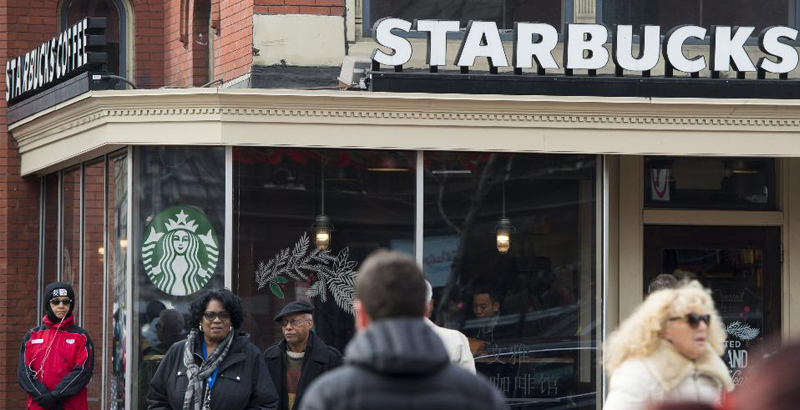 After in January, Starbucks CEO Howard Schultz announced that the company is going to hire 10,000 refugees in response to US President Donald Trump’s temporary travel moratorium, the Starbucks Coffee brand has lost the loyalty of a large part of its clients.

Last month, Starbucks sharply criticized Trump for his temporary ban on immigration from seven countries with a predominantly Muslim population. In response, the company promised to hire 10,000 refugees during five years in protest against the Trump’s order.

However, about 50 percent of Starbucks clients disagree with leftist political opinions of the company’s CEO. As Yahoo Finance information website noted, the Schultz’s decision to attract migrants to the working process in the company has been sending the company’s “brand perception” into a downward spiral since January 29.

According to YouGov BrandIndex, “the Starbucks consumer perception levels have fallen by two-thirds since late January.”

“The perception tracker measures if respondents have ‘heard anything about the brand in the last two weeks, through advertising, news or word of mouth, was it positive or negative.’ In Starbucks’ case, perception is still overall positive, but significantly lower than it was prior to CEO Howard Schultz published a public letter outlining the company’s plans to give refugees jobs,” the Yahoo Finance’s article noted.

According to YouGov, just a week before the company’s announcement about its plans in January, 30 percent of respondents said they would consider spending money at Starbucks. However, after the Schultz’s statement, that number fell to 24 percent.

A #BoycottStarbucks movement also immediately appeared on Twitter after the company’s announcement and brought condemnation from coast to coast.

It is not the first time, when Starbucks has alienated its clients, publicly pursuing a controversial political agenda. In March 2015, the company had to abandon its ‘Race Together’ campaign that was intended “to be a catalyst for a larger conversation on race” relations in the US.

They hardly pay any taxes, thanks to favorable international tax haven constructions, and then they think they can preach to us? Companies like this are locusts.

They financially supported the opposition to GMO labeling . Not part of the solution , a big part of the problem .

I find this story a bit biased, the story fails to mention that Starbucks also made other moves about the same time as this one. They started locking their bathroom doors to keep homeless people from staying in them and they announced soon after the refugee highering plan to increased the efforts they already made to higher veterans and their wifes. So to write that people’s perception about Starbucks was negatively affected due to the action about highering refugees (big difference. Not immigrants…. REFUGEES) without making it clear the that there is at least 2 major items that could of been the catalyst to the change in perception is to me bias and more about making a point that misleads from the full facts then writing a news report. Bad reporting southfront.

Southfront just like any other news source is biased. i try taking info from multiple sources

That is very true. Never get all your news from one source.

You’re completely misinterpreting the article and your post is the definition of ‘strawman’.

The article correctly says ‘refugees’ and not immigrants like you pointed out? Look at the title! Big difference!

“They started locking their bathroom doors to keep homeless people from staying in them” this decision didn’t recieved media attention so very unlikely people would know about it! It would probably enhance their image if the public learnt about it. At worst would affect their image 50/50 so no difference.

“to higher veterans and their wifes” no MSM attention again but even if it received MSM attention it would boost Starbucks perception not lower it!

The perception of Starbacks crashed after this specific decision not the other ones you mentioned since it was this one that received wild MSM attention because it ‘fit’ MSM’s anti-Trump nerrative! No idea why the other two just agreed with you in this ‘whatever’ post of yours!

Do you even know what the qestion of the survey was?

“The perception tracker measures if respondents have “”heard anything about the brand in the last two weeks, through advertising, news or word of mouth, was it positive or negative.””

So people actually said what was the “anything” they heared about the brand and if it was “positive or negative”! In other words your whole it might have been the other reasons just falls apart!

The word biased means SF leans to Trump since this article is linked to Trump’s exec. order. Go look at other articles the criticism that Trump recieves from Southfront, especially when it comes to Syria and Ukraine since South Front covers military clashes mainly. There is no bias here, just you chasing ghost points you created and 2 others agreeing without even thinking!

Starbucks is also very expensive and disposable income is rare.