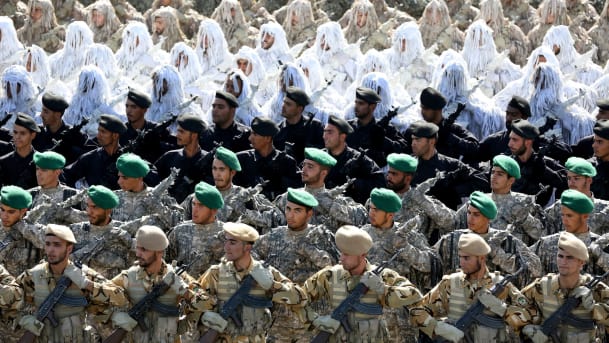 The hysteria over the alleged Iranian operation to assassinate a member of the terrorist group operating in Iran who lives in Denmark is developing.

On October 30th, Denmark called for fresh European Union-wide sanctions against Iran and recalled its ambassador in Tehran after the accusations.

US Secretary of State Mike Pompeo congratulated Denmark and called for its “allies and partners to confront the full range of Iran’s threats to peace and security.”

A Norwegian citizen of Iranian background was arrested in Sweden on October 21st in connection with the plot and extradited to neighboring Denmark, Swedish security police said.

The man has denied the charges. Iran also rejected all allegations.

“This is a continuation of enemies’ plots to damage Iranian relations with Europe at this critical time,” Iranian foreign ministry spokesman Bahram Qasemi said.

According to Danish intelligence chief Finn Borch Andersen, the target of the attack was the leader of the Danish branch of the Arab Struggle Movement for the Liberation of Ahvaz (ASMLA). ASMLA seeks a separate state for ethnic Arabs in Iran’s oil-producing southwestern province of Khuzestan. It also took responsibility, along with ISIS for an attack on an Iranian military parade in September. The attack left 25 people dead. Thus, Denmark is giving protection of a group that has taken part in terror attacks.

In September, Iran summoned the envoys of the Netherlands, Denmark and Britain over a shooting attack on a military parade in Khuzestan that killed 25 people.

Denmark has also not provided any evidence whatsoever of its allegations. On September 28th, as if in a spy movie, Danish police shut two major bridges to traffic and halted ferry services from Denmark to Sweden and Germany in a nationwide police operation to prevent a possible attack.

According to Danish police, the Norwegian suspect had been seen photographing and watching the Danish home of the “target.”

In November 2017, Ahmad Mola Nissi, an Iranian exile who established ASMLA, was shot dead in the Netherlands. Following the incident, Danish police increased protection of the ASMLA leader and two of his associates.

It is interesting to note how an alleged, unproven attack gets instant calls for sanctions and a strong response from Denmark, the US and the UK, among others, simply because it involves Iran on the “guilty side.”

The response to Khashoggi’s proven murder by Saudi Arabia is yet to receive such a response from the US or the UK. Denmark has taken no side regarding the issue.

Regardless if Iran did plan an attack or it was just a row of media hysteria over alleged Iranian misconduct, the fact of the matter is that this “incident” will have an impact on the EU-China-Russia efforts to assist Iran in avoiding US sanctions.

The timing of the scandal is also noteworthy, it comes just several days before US sanctions targeting Iran’s energy sector and oil exports come into effect on November 4th. The entire narrative is being spun out of proportion, likely because it would damage EU-Iran relations and, thus, enhance the damaging effect of the sanctions.

That was the word you were looking for in the headline.

European government are now in full protection of terror groups in open view now? They did it secretly in the past. Congratulation for coming out of closet!

When they engage in such lies (they never showed any evidence regarding the alleged bombing of another terror group’s gathering, the MEK in France which was also coincidentally at the same time of Iranian president’s visit to Europe for important talks, they won’t show anything for this one either) tells me they hit the bottom of the barrel. Iran doesn’t do anything that they use as an excuse, so they invent one. The same goes for Russia and will happen shortly to China.

With this pace they lie, even their own people will find out the truth which will result in even more desperation. The clock is ticking, thanks for the confirmation.

in the latest years it appears that Denmark is spending lots of efforts in order to enter the clubs of US puppets and traitors of Europe.

It’s very likely that the same entity that created the neocons has put lots of money into some danish politicians pockets. Another source of corruption could be Wahabistan, also known as Saudi Arabia.

I still have some hope that the Danish judiciary system will start looking into these issues – after all Danes are still Europeans, not yanks, kikes or ragheads, the local population should still know which side they are on after all.

I think it might be about Greenland. The US has threatened to take Greenland from Denmark, if they don’t play ball. Greenland seems to have a lot of oil and gas and Denmark thinks it can keep it, if they suck up to the Americans.

None of that is true at all.

Greenland partly have autonomy as well. So if the danish Goverment wont support few more airfields, they are allowed to ask others.

And no oil is found at all. there are only small traces here and there.

There are mineral there fx gold i relative concentrated estimates. The problems are Greeenland is mountains very much up down and up down and no roads.

Its too expensive to get out from there fro the next many, many years even gold prices went skyhigh.

Its seemes like You only play ball with Your own in this. No facts. No Internet check as usual.

“No facts. No Internet check as usual.”

Thats no proof at all. Proof is in the already well done research for the whole formations there. More like inflation for me and Greeland begging the rest of us for more maoney and unneeded airports.

Its YOU who dont read dear Jens. He says “might” and “seems” and provide documentation for these assumptions, delicately reserving the case for other possibilities.

Ahh, the airports, are they the airports that China offered to build, and the US and Denmark pressured Greenland to accept the Chinese offer?

The same airports that the US made Denmark fund?

Also Denmark supposedly has benign concern for Greenland, but openly allows the US to dump vile pollutants in Greenland.

Hah coming out of the closet…funny.

As far as MEK is concerned they have been openly supportedby the western elite for a while. Everyyear they have their stupid conference that ends with next year in teheran.

Its too bad the people in the west are so fucking selfish they cant even see us for the warmongering blood thirsty hordes we are.

For me personally is getting aggravating being surrounded by misguided fools that are too lazy to dig a bit deeper. The too long didnt read people ( thats you smegma) are either too ignorant to care or have an insidious agenda. How can we get through to these blockheads

You cant. Europeans are voting, paying high taxes, paying usury loans, bills, to get free of any responsibility and left in peace with pink Nike shoes drinking chocolate talking about how wonderful we are. They simply pay their politicians for doing the dirty job.

We must remember the media is funded by both the zionist’s and the Saudis with big big money. They are told Biden and Harper etc., attending MEK meeting in France was to promote ‘freedom and democracy’ in Iran. Anything counter to the narrative is pulled. ‘The bloodthirsty’ are those money bags paying ‘smegma’ and his friends. Our day will come.

When “their own people” find out the truth, they’ll react with censorship (it has already started…), oppression (anti-veil laws…) and totalitarianism, meaning: they definitely show their fascist hard core…

1. Why do the Danish and Dutch governments harbor the the spokesperson (Yaqoob al-Ahvaz) and other members of the Al-Ahvaziya terrorist group? 2. Iran has asked the Danish and Dutch governments to hand over Al-Ahvaziya members to Iran. They have accepted but not delivered. 3. Where is the evidence for the alleged “attack on an individual in Denmark” and its link to the Iranian intelligence agencies?

A can of corned beef stands up straighter than Khashoggi these days, but Iran is the on plotting the deaths of others in foreign lands.

It`´s probably a hoax from the very unpopular danish prime and foreign minister…..election is also around the corner and their parties are going to be the losers….their days are numbered. Here is a link with the Iranian reaction.

Oh Denmark, Sweden; bless your past when you were fantastic, so what happened?. You are the most retarded, Yank arse-licking sad shysters that the World has seen (maybe with the exception of Canada and Australia).

Some might say we got too many muslims here never asked for. Half of them are of no use at all and cost us 5 billions dollars a year widen out our own problems too.

By that we get 3 oposition groups in stead of hardly ones. Before that the same right wings did not like jews. Muslims are the new jews in that context.

And I will add. What did our sober neutrality to You given so many money, so more of you could leran to read and write and women and females would have equal rights.

It gave nothing apart from hate to us being neocolonists, jews, westerns and worse. We are tired of that.

When we are being friendly, You say haha we are weak. You only understand we kill random and are used to be runned by fear.

Thats how many here see You.

Iam milder then that and only ask for a fence around you. we can send in food if you need and we can buy oil from You. Thats my oppinion.

Most of You cant even read Your holy Choran and only get a parrot version of it mixted up with oppinions from old men.

Muslim women here in Dnmark has more rights then Your ever has had. They lern to red danish and by that can read a traditional or a modern version of the Choran. By that they at least get normal very low rights for women and females at home according to that book.

‘half of all women and girls in the danish safe houses are muslims even they are less then 4% of the population. How comes. You men really show well how limited You are Youirself and should make influence by women. You by birth dont learn to control Yourself andknow nothing about what honor and respect is. Well majorities dont – not all.

More like the asslicking among socalled men is the only thing You are really good at Yourself. Assad, Erdogan and Putin hardlyhave any asses left. Do we ever see them from behind.

Have you ever wondered why all those Muslims left their homes and fled to Europe?

The answer is the people you so admire, the US and NATO destroyed their homes, and trained and paid mercenaries to commit atrocities in the Middle East. Eventually your culture will be replaced with Muslim culture, and you supported it.

Yes they do. Denmark has even taking away their home defense army´s riffles and locked them in, so there is no one to defend the danes when US roll in a couple of trucks with machine guns and explosives to these terror groups.

These double standards are almost unbearable