How does the crisis in the Kazakhstan economy, recognized by the leadership of Kazakhstan, threaten the Eurasian Economic Union? Considering that Kazakhstan along with Russia is, so to speak, the energy locomotive of the EAEU, but that prices for energy supplies are trending down, things will not come easily and precisely for the Union in the near future. Receipts in the budgets of the Russian Federation and Kazahstan are reduced because both economies, are to a great extent oriented to the raw materials sector. 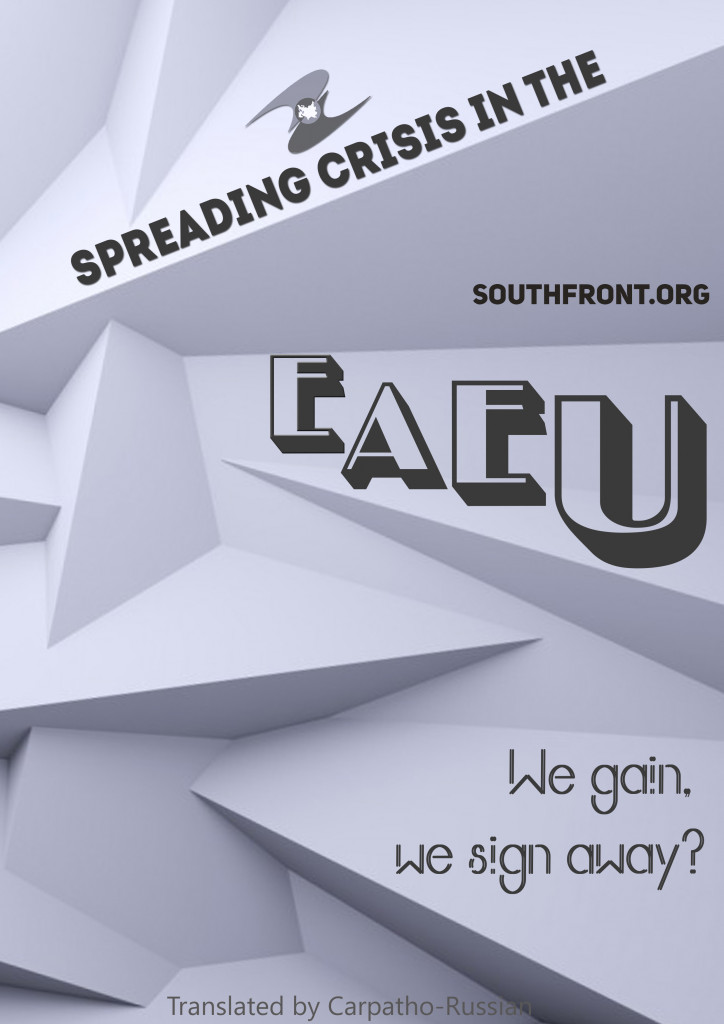 This article originally appeared at Topwar, translated from Russian by Carpatho-Russian exclusively for SouthFront

The rate of the Kazakhstani tenge this past weekend was fixed by the Bank of Kazakhstan at almost 240 tenges per dollar and 270 per euro. Thus for the first time in recent years the President of the country frankly declared that Kazakhstan faced an economic crisis which is sector-wide, and mentioned the most important enterprises of the Republic. The head of Kazakhstan provided a list of the major factors which have pushed the economy of the RK to a crisis: the low prices for oil (the price per barrel of Brent dropped to 45 dollars and WTI to 40, demonstrating declines over an extended period of time) and metals, restriction of availability of investments, and contraction of the market for sales of the production of Kazakhstan enterprises due to the decrease in demand for this production, first of all from neighbors Russia and China.

“We have not had this before. And this demands from us totally different approaches.”

The head of the Republic of Kazakhstan announced that Astana is not going to retain, at least in the near future, the national currency within the “corridor” [band] which in the last two years removed approximately 28 billion dollars, without having led to openly positive effects. And therefore the Bank of Kazakhstan also went over to the floating-rate option, which undoubtedly affects not just the rate of the tenge, but also price lists.

Prime minister of the RK Karim Masimov also spoke regarding the transition to a floating rate of the national currency of Kazakhstan when entering into the Eurasian Economic Union. According to him, if attempts are made in the current situation to maintain the rate of the tenge in a currency “corridor”, it will continue to “burn up” national reserves.

If one were to trust official statistics, the amount of resources in the National Fund of Kazakhstan, intended to reduce dependence of the budget on negative consequences of world economic shocks, exceeded 75 billion dollars in 2013 (by comparison: in 2008, approximately 27 billion dollars). But within two years the resources seriously melted away (down 40%), and they were not generally on infrastructure projects nor on development of the industrial sector, but on maintaining the rate of the national currency. In principle, Kazakhstan in this regard copied (with a rare exception) the Russian economic model with a “corridor” course and intrusive interventions of the Central Bank.

According to Nazarbayev, the “fat years” are now behind, and the country should transfer to an understanding that “it is necessary to live within our means”. The first consequences of such an announcement, as well as the consequences of a transition to a floating rate of national currency, as also in Russia, would be felt by representatives of small and medium business. The Kazakhstan banks are reconsidering credit policy on an expedited basis, and this revision is expressed in increased credit rates and decrease in volumes of delivery of credits, which strikes a blow to the growth rates of the economy. If last year growth was recorded at a very good rate of 4.3% and if initial forecasts for 2015 growth had to be at least 2%, now it is necessary to reconsider the forecasts, by which is called in real time literally “back of the envelope” .

Discontent with forecasts “not being borne out” was expressed by Nursultan Nazarbayev, who declared that the forecasting technique must be improved, to yield monitoring of the external and internal situation. Nazarbayev noted that operation of the state institutes on social and economic development, and also implementation of five institutional reforms and the most important tasks of the “Nurla zhol” program must be based on thorough analysis of the situation both within the country and in the world.

It is easy to say: “predict better”, of course … In practice the situation in the current economy ceased long ago to be really predictable. If there is someone who “predicted” the crisis, then for a specific time he is held up literally by the hands of others as the foremost super-expert. However, the same expert is most often not in a position to be able to predict the next crisis, and then either fades into the background or refuses to make a forecast. That happened for example with Nouriel Roubini, who announced in due time the future crisis of 2008. After that, even he will not take up with precise forecasts at all … Here, many economics experts quite validly talk about the fact that to do any forecasts in the current economy is a thankless task, since the economy has completely turned into the servant of policy. It is specifically the political environment that most often determines the further direction of travel of the global economic ship.

How does the crisis in the Kazakhstan economy, recognized by the leadership of Kazakhstan, threaten the Eurasian Economic Union? Considering that Kazakhstan along with Russia is, so to speak, the energy locomotive of the EAEU, but that prices for energy supplies are trending down, things will not come easily and precisely for the Union in the near future. Receipts in the budgets of the Russian Federation and the RK are reduced because both economies, to put it mildly, are to a great extent oriented to the raw materials sector.

One can declare, of course, that for us this is “not everything, thank God”, and that the economies of other countries that are likewise in many respects oriented to export of hydrocarbons are growing at “unsettled rates” , but this will be obvious craftiness. By comparison, one might take the situation in Norway, whose budget even more that that of Russian and Kazakhstan depends on sales of hydrocarbon raw materials. Well then, in Norway economic growth in the second quarter slowed down to 0.2%, which lags behind forecasts for 2015 by a factor of two and a half. With that, in the same Norway a reported unemployment growth of 4.3% is a record for this state. Yes, other developed countries might envy this percentage, but the entire matter is that for the Norwegian kingdom 4.3 % is in fact the record for all previous years. And this is not at all a justification that “everything is bad for them too”. These are the facts.

Again to the EAEU. The decline of the economy of Russia, against the revealed slowing of growth of the Kazakhstan economy, can lead also to a decrease in volumes of commodity turnover throughout the entire Eurasian Economic Union. Last year, the trade flow rate between the Russian Federation and the RK was recorded at a decline of more than 19%. New rules of interaction in the EAEU realm lifted slightly the trade flow level within the Union space, but now there is the threat of it decreasing again – a decrease in the purchasing power of the population, and significant barriers to development of small and medium business against the background of bank rates which [banks] do not in any manner decrease actively (at least, in the Russian Federation), despite the decrease in the key rate of the Central Bank.

Does it turn out that when a new crisis comes (including also within the EAEU space), it is necessary to resign oneself and wait until it is overcome? But if a crisis wave also does not cause the economies of the Eurasian Economic Union truly enormous damage, then where is the guarantee that a new wave won’t do so? And after all, such waves began to rise over an economic surface very frequently …

There are no guarantees. And why not? One of the reasons for such uncertainty in economic successes of the near future can be considered that banks, funds (including state), financial groups, and other such organizations are not burning with the desire to invest in practical sectors of the economy. The overwhelming majority of such organizations are engaged in accumulating funds in their own accounts “just in case”. Say, a crisis will come – and we will simply cover it with the reserves and then we will develop again … The only thing is that the development after this appears weak and short-lived. That is, there is a variant of “Kudrinomics” in which a “moneybox” is set up as the main instrument for overcoming the crisis: accumulate – “burn up”, accumulate – “burn up”, etc. But, considering that it is less and less possible to accumulate, but crises come even more often, such an approach has an essential defect. Whether you want that or not, the moneybox can empty sooner or later (and our foreign “friends” pin their hopes on the exhaustion of funds of Russia, Kazakhstan and in general all those who try to show an independent policy foreign), and then it will be late to hold forth on the subject: “so, why did we (Russia, Kazakhstan, other partners in EAEU) not hasten to invest in practical sectors of the economy?”

If in both Russia and Kazakhstan the authorities recognized that burning through all the reserves to maintain the exchange rate of national currencies is reckless, then isn’t it time to recognize that reserves must go first of all to well-thought-out investments in industry and technologies? – since after all it is in specifically developed industry (and not active investments in American debt obligations), as global practice shows, that long-term and stable economic success is grounded. Here it would be good to manage this one time without “Skolkovo effective managers” throughout the entire extent of the economic union.