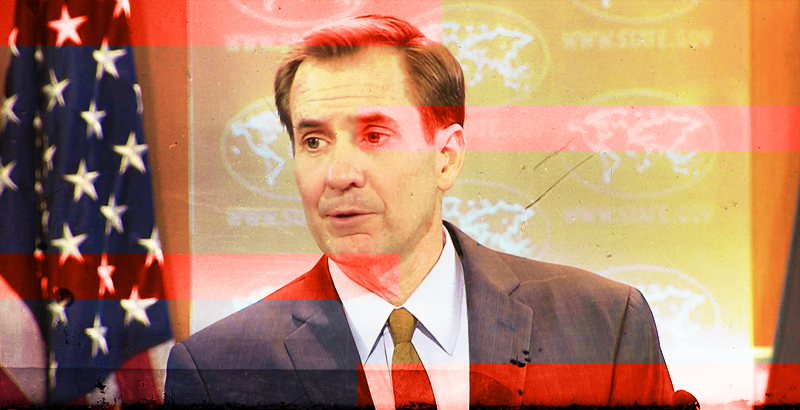 Sokesperson for US State Department, John Kirby, refused to condem the actions of Al-Nusra Front terrorist group (also known as Jabhat al-Nusra; its new brad is Jabhat Fatah al-Sham) when he was asked to explain the US strategy in Aleppo during the press briefing on October 11.

The transcript of the moment:

QUESTION: Syria, yeah. Our correspondent, reporting from western Aleppo, interviewed locals who say fighters in the rebel-held east deliberately fire at civilians who are trying to leave. Are these people effectively held in Aleppo, in eastern Aleppo?

MR KIRBY: I can’t confirm that report. You know I don’t get into battlefield reports; I’m not going to do that. What is without dispute is that the siege of Aleppo continues, as I was mentioning earlier. And your question about being held hostage, there should be – and I’ve seen reports that they’re allowed to leave. They shouldn’t have to leave, and they shouldn’t be being bombed by their own government and by the Russian military. And that’s what needs to stop.

QUESTION: That place, eastern Aleppo, is run by al-Qaida militarily. How do you imagine people living peacefully under al-Qaida?

MR KIRBY: I think – first of all, I’m not going to get into a debate about who runs what neighborhood in Aleppo with you. We’ve been clear, and so has – 65 other nations have been clear, that the threat of terrorism in Syria is significant, predominantly from Daesh and from al-Nusrah, which is in – which is – we consider al-Qaida in Syria. And that’s why the coalition will continue operations across multiple lines of effort, not just military, to degrade and defeat, particularly, Daesh inside Syria. So if your question is how can people live under the jackboot of terrorism, I would agree that that’s not something we want them – a choice that we want them to have to make. They shouldn’t have to do that, which is why the coalition is so focused on that group.

QUESTION: Well, isn’t the way to really protect civilians is to get them out of there? Because al-Nusrah is not leaving, apparently; neither are the rebels who are intertwined with them.

MR KIRBY: And they’re not likely to want to leave while they’re continuing to be bombed. What needs to happen is a cessation of hostility and the bombing needs to stop. And who’s doing the bombing? It’s the regime and it’s Russia.

QUESTION:I just wanted to ask you: Is it conceivable that elements of al-Nusrah could be holding members of the population hostage, or at gunpoint, preventing them from moving about?

MR KIRBY: I don’t have any information on that, Said.

QUESTION: But it could conceivably be that?

MR KIRBY: Again, you’re asking me to speculate on a hypothetical here.

So, Kirby one more time  proved that the US will oppose expelling Al Nusra terrorists from Aleppo.

“Im not even going to dignify that question with an answer”

And there you have it! The Neocons and bang bang heads of 66 nations are ‘offended’ that a journalist would like to understand why they think its COOL to leave Al-Qaeda and ISIS and Al-Nusra inserted in East Aleppo. Just charming!

very simple, enemy of my enemy is a friend. Since Assad is declared as an enemy, obviously ISIS is also a friend, which we saw during Deir al-Zour bombing.

Good point, just why did they give ISIS air cover?

I have just been listening to Jeremy Vine, BBC Radio 2, with regards Boris Johnson asking why ‘Stop The War’ is not protesting. I seriously cannot believe the Conservative MP, who once led the UN Forces, in Iraq I believe (now was that war legal?). He has stated, he is happy for UK Air Forces, to take on the role of the Japanese Kamakaze pilots in Syria. The man has no understanding of the fact that we have no authority to be in the area, let alone that the S200, S300 and S400 would happily take our Forces out and with international law backing the legal Syrian Forces, and the Russian Forces, who are in Syria, at the request of the elected Syrian Government.

Who was asking the questions, finally a member of the press who has some dignity.

It is contorted logic on the side of M. Kirby. He is a mouthpiece for something that has gone completely off the reservation. I don´t generally let him get to me anymore.

When I look at the picture I know what I see: a typical joo…..

poor american people and us europeans too, ruled by the friends of alquaeda