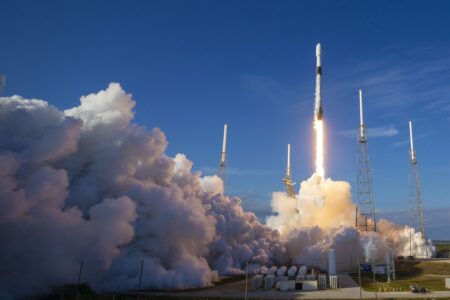 Preston Dunlap, a top US Space Force official announced he will be stepping down, warning the US is falling behind and could lose its technological edge over China.

On April 17, the US National Reconnaissance Office sent a classified payload on a reused rocket for the first time. Private aerospace giant SpaceX successfully launched a US spy satellite into orbit, deploying a reusable Falcon 9 rocket to carry its payload into space. The rocket was launched from Vandenberg Space Force Base in California. This is the second time that SpaceX launched a US spy satellite. The space corporation, the world’s largest private venture of its kind, has something of a rockstar status among space enthusiasts. However, this reputation may change due to the company’s ever increasing cooperation with the Pentagon, a controversial move at best, given the US military’s track record.

To make matters worse, SpaceX is now getting involved not only in US military space operations, but also cyber and electronic warfare. Since 2014, extensive US military and intelligence operations in Ukraine have been hitting proverbial walls, because the US has had major trouble in trying to match Russian electronic warfare (EW) capabilities in the region. According to the Pentagon, this is changing now, thanks to the involvement of SpaceX, which has allegedly been able to circumvent some of the Russian electronic warfare capabilities through “simple software updates“. How valid is this claim remains questionable at best, but it does offer an important insight into the increasing multilevel cooperation between SpaceX and the Pentagon, which was initially denied back in early March.

“From an EW technologist perspective, that is fantastic. That paradigm and how they did that is kind of eyewatering to me,” said Dave Tremper, director of electronic warfare for the Pentagon’s acquisition office. “The way that Starlink was able to upgrade when a threat showed up, we need to be able to have that ability. We have to be able to change our electromagnetic posture, to be able to change very dynamically what we’re trying to do without losing capability along the way.”

As stated before, the officers of the Directorate of electronic warfare for the Pentagon’s acquisition office did not give any further details on how exactly this was done. Although they may justify it by saying it’s a state secret, it still casts serious doubt on the claims, as relevant military sources haven’t reported on any possible disruptions of Russian electronic warfare capabilities in Ukraine or elsewhere. For instance, Russia has been using the same EW capabilities in Syria for nearly 7 years now, seriously affecting illegal US operations in the country, but no such supposed disruptions of Russian EW assets there have been reported.

Brigadier General Tad Clark, the USAF’s director of electromagnetic spectrum superiority, also prefaced his statements by acknowledging that “he couldn’t detail specifics” about what kind of information the US is collecting about Russian EW capabilities based on its activities in Ukraine. However, he noted that those activities do more than simply provide information about Russia’s technological capabilities.

“We’re learning a lot what Russia has been investing their money in, the sophistication and the reliability of their equipment, and.. their ability to execute that mission in a synchronized fashion,” he said. “It gives us some insight of where certain countries are, where we are, where we need to be, and where we want to be.”

For his part, Dave Tremper stated that the Pentagon expected a “much stronger” EW showing from Russia. However, he cautioned this isn’t to say Russia’s efforts have failed, but that it’s possible Russia has simply decided not to show all of its cards. Thus, SpaceX’s involvement in trying to understand how Russia is conducting its EW operations has been called “eye watering” by US officials, which further strengthens the point the Pentagon is increasingly relying on private companies, some of them not even primarily military in nature, to enhance its EW assets.

In addition to problems matching Russian capabilities, Preston Dunlap, a top US Space Force official announced his resignation, warning the US is also falling behind and could lose its technological edge over China as well. Dunlap, the chief architect for the Space Force, argued the military used to excel in areas like artificial intelligence, but that the commercial sector is now surpassing the defense community. He added this is ultimately providing an opportunity to U.S. adversaries.

“These are accessible to anyone with resources and academics and capabilities, and so our adversaries or potential adversaries are able to have access to that technology, not only inside their own economies, but because of the benefit of our free and open society, which is a great thing,” Dunlap told co-host Todd Piro.

Dunlap also cited Russian involvement in Ukraine as an example of how pertinent it is for the American military to have access to the most modern technology possible if the US is to match near-peer adversaries such as Russia and China.

Sure, Russian Orcs have technological edge. They have best technology for rape, looting, torturing and murder, lol.

NOTHING that America does ANYWHERE on Earth is for “Freedom” anymore. As MLK warned: they are “the arch enemy of people seeking freedom all over the globe”. NOTHING they do is for honest or legitimate reasons anymore: only to serve the globalist FMs.

I always laugh when I hear Americans talking about their re “free and open society” there is in fact no such thing. Their democracy is a, sham, we saw them rig and election with our own eyes!

amazing how many sheeple in USA have no clue

soon, they will – but too late to save them