North Korea and South Korea have ageed to hold a summit meeting between Kim Jong-un and Moon Jae-in on the country’s border in late April.

According to the South, the sides have also agreed to estabsih a “hotline” between their leaders. The first phone conversation will reportedly take place before the summit.

“The North Korean side clearly stated its willingness to denuclearize,” the South Korean president’s office said in a statement. “It made it clear that it would have no reason to keep nuclear weapons if the military threat to the North was eliminated and its security guaranteed.”

“The North expressed its willingness to hold a heartfelt dialogue with the United States on the issues of denuclearization and normalizing relations with the United States,” the statement said. “It made it clear that while dialogue is continuing, it will not attempt any strategic provocations, such as nuclear and ballistic missile tests.”

The statement came after a South Korean delegation had returned from a trip to the North Korean capital, Pyongyang. However, these claims of the South still have to be confirmed by the North.

“The North expressed its willingness to hold a heartfelt dialogue with
the United States on the issues of denuclearization and normalizing
relations with the United States”.

Beginning of the end.

I suspect that ‘The Kim’ is playing a game to woo the South away from the US. At least enough so the US can’t use its bases there to strike the North on its own. Not only would it be a cold day in Hell before ‘The Kim’ gives up its nukes (and rightly so), his regime depends on having a mortal enemy, always ready to attack the North at a moments notice. Without it people might start to object going hungry.

Is it really necessary to always attribute the worst motives to the North Koreans? Maybe they really do want peace with the South, and just maybe, if the USA backs off and lets the Koreans sort it out, that can happen. A great trade-off would be for the USA to close its bases in South Korea and fuck off back to America in exchange for North Korea giving up their nuclear programme. The family, cultural and language ties between North and South Korea are far stronger than their allegiances to America, Russia and China. Letting all the Koreans live in peace and prospering together seems like the right thing to do.

And as for regimes that depend on having a mortal enemy, the USA fits that profile perfectly.

What a joke. Only in Hollywood there are happy ending.

USA will not close SK bases and will destroy any good deal between NK and SK. Don’t think that USA invading Korea to withdraw.

The main problem is that people think that USA wants good for people. That’s the main though that make you deluded.

I have no such illusions. The USA is the Evil Empire. I think that the Koreans deserve better and that it’s long overdue for the rest of the world to push back. Frankly it’s in the ultimate interests of the richest people in America to dismantle the American Empire and redirect the wealth away from the military. I don’t see them doing that voluntarily, but it’s hardly a secret that the American Empire is in decline and is consuming its economic base in North America. It’s no secret that every other empire in history has ended in a similar way. The smart thing would be to back off from the abyss and then to chuck out Capitalism, but fanboys of Ayn Rand have Ferengi DNA and don’t appear to know how to do that.

I wouldn’t call that worst motives, just plain real politics. The regime in the North does what is best for the regime. That in itself is neither good nor evil. I daresay that when the North has nothing to fear from a US strike being launched out of the blue from the South its best for both countries. And its not like the South desperately needs the US to defend it, conventionally it has the upper hand over the North.

Perhaps mister Un is part of the game….. which will change the perspective…. 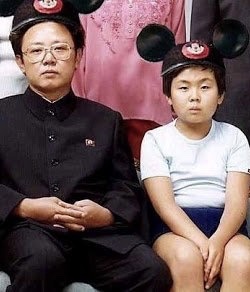 im still waiting for NK’s definition of guarantee. Just maybe they’ll ask for mutual denuclearization lol. A condition that will never be accepted by US. Or perhaps a lower bar to isolate the US.
The US need not apply more sanctions today lol.

It’s because, NK has such a good ally (China) which make sanctions against NK because NK is building weapons. XD.

Always give a look at your ally. The best is to trust no one and build your own protection.

North Korea, South Korea and China have one goal, to get the USA out of Korea, I wish them well in their endeavor.

I would never do it, dear Kim.
Saddam and Muamar send lot of greetings to you.

I do not hesitate to say, that this will end within days.
A FF somewhere close and we shall be back to the square one.

Make North Korea weaker again is what the US wants! Kim should not be a fool and give up his weapons. Biggest mistake that the president from Libya did.

The US will never allow peace to break out in Korea.

“Kim Jong-nam, the half-brother of North Korean leader Kim Jong-un, was holding US$120,000 cash when he was killed at Kuala Lumpur airport in February, the Asahi Shimbun reports, citing unnamed Malaysian officials close to the investigation.

The investigation team reportedly recovered four bundles of mostly new $100 notes in stacks of 300, as well as a laptop and two mobile phones. Since Kim Jong-nam held a diplomatic passport, his luggage was not subjected to a thorough search at the airport.

In Malaysia, Kim Jong-nam met with a US citizen at a hotel four days before the assassination. The American, presumably, has links to an intelligence agency, the newspaper reported.”

There’s only one thing that the CIA would give Kim Jong Nam $120,000 for, regime change.