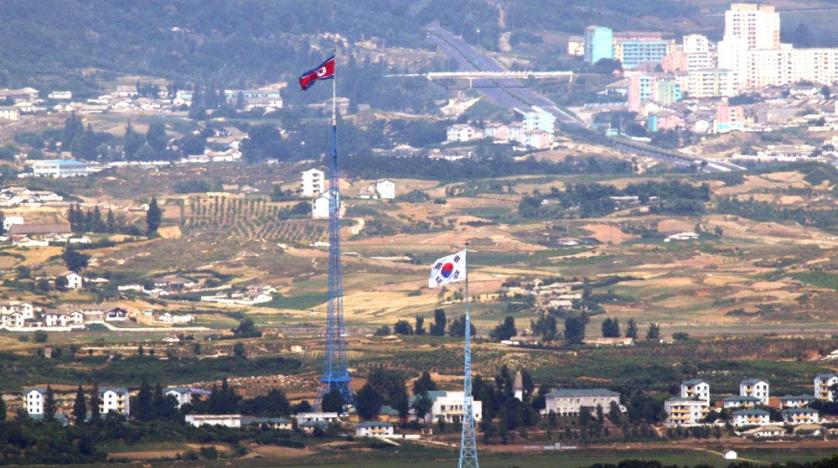 On July 28th, South Korea announced that it had become capable of developing improved solid-fuel rockets under new missile guidelines for the US.

Officially, this is for ‘space rockets,’ but it is more than obvious that this relates to improved solid-fuel missiles.

The US agreed to lift the decades-old restrictions on Seoul’s use of solid fuels for its space rocket launch, effective as of the day, according to Kim Hyun-chong, deputy national security adviser.

Solid fuel offers greater mobility for missiles and rockets, and reduces launch preparation time. But Washington had imposed strict restrictions on Seoul’s use of solid propellant for space launch rockets out of concern that it could be used to produce bigger missiles and cause a regional arms race.

The time for that has passed, and a regional arms race is likely what will happen.

Kim said the revised agreement still bars South Korea from having a missile with a range of more than 800 kilometers. But he said Seoul can discuss altering that restriction with Washington if that’s needed for South Korean national security.

Kim said solid fuel is much cheaper than liquid fuel and is more useful in times of lifting low-earth orbit satellites.

One of the best applications for that is for Seoul to launch low-orbit reconnaissance satellites, since it currently has none.

Korea’s missile guidelines with the U.S., meanwhile, have been amended four times, including the latest revision, since the first agreement in 1979 to limit Korea’s ballistic missile development capabilities.

The previous revision was in September 2017 and lifted ban on missile payload while restricting Korea`s ballistic missile range to 800 kilometers. As mentioned earlier that may change in due time.

There is yet no published response from North Korea, but it is unlikely to be taken lightly. The claims that this restriction was lifted only to develop space capability also holds little water.

I bet with Russian tech. Most South-Korean SAMs are modded Russian SAMs via Samsung-Thales.

Yes. The S-350 cooperation that was closed by Russia. That was in days of precarity of Russian financial position (after Yeltsin era ) so Russians didn’t have much choice in those days

Russia is forever in a precarity, they begged India for an year to buy their underpowered Su 57

Why is SU-57 “underpowered” when it is faster and more maneuverable than F-22?! India was to buy SU-57 with 2nd stage 5th generation engines that were built for SU-57. They didn’t say definite no, they still analyze their situation so I would hold my breath if I were you. One thing is sure they have NO answer on Chinese jets of 5th generation. They are not interested at all in buying Flop-35 so the only option in the tow left is Russian SU-57 (since India is not capable of producing 5th gen. jet)

I didn’t say India will never buy the pane, but when it will be fiable. Russia tried to shove it on their throats 2 years ago when was obviously underpowered. They needed that money for its development. And if they will improve it and make it a real competitor for the F-35,F-22 that will be verry good, for competition purposes. But for now no other country purchased it to confirm that it’s stealthy. And I highly doubt the current version is stealthy.

You read rubbish Western propaganda that’s why you get everything wrong. India was expecting transfer of the tech for the price they were offering and Russia have REFUSED that, not India. Because India was not offering enough money. In all agreements on SU-57 India was insisting on 5th generation engine being installed in jet. So that was never problem since first agreement was that India and Russia BUILD TOGETHER from scratch “FGFA” (that’s how India has called their SU-57 project) So Russia had plenty of time in that agreement to finish the engine. Bollocks on “under-powered” engines is just anti- Russian propaganda of US and French lobby in India.

I don’t give fuck what you believe or “doubt” you Western simpleton. F-22 is not for sale and F-35 “FLYING BRICK” India does NOT want to buy like anybody else who has any brains! So called “F-21” that Lockheed is having to offer is just old F-16 on steroids and India doesn’t need another 4th generation jet when they have already very capable SU-30MKI “Super Sukhoi” upgraded jets and new French Rafales far more capable than “F-21”

F-35 was never offered to India.

You are being ignorant on many things Yes it was offered and several times. There is very virulent well paid US lobby in India (India is country with plenty corruption)

US offer was correlated with F-16 offer with F-35 as further down the road option. But India was never interested either in F-16 or in F-35. They have produced their own version of light single engine fighter so that U.S. offer was non starter from the beginning. On top F-35 is bad and expensive.

BS! If you believe Russian nationalist media, USA even offered F-22 to India but in exchange for children for paedophiles like Epstain but Putin advised India to to not sell their children to the Nazi Westerners and India agreed to convert to Orthodoxy.

Back on a serious tone, F-35 is currently offered only to closer allies, that are not buying at this moment Russian weapons. In the near future it will be offered to anyone but not right now.

You are an stubborn idiot as usual. Japan is one of the closest and most loyal allays that US has and they have asked so many times to buy F-22 (not F-35 that was offered) and US have refused even them. They have refused Canada also. So in short F-22 is NOT FOR SALE. India has refused F-35 (“Flying Brick”) !!!!!

F-35s are not the right choice for India’s defence | Opinion https://www.hindustantimes.com/opinion/f-35s-are-not-the-right-choice-for-india/story-HZbYkoBcUewaTHS0kYRjAL.html

We Are ‘Not Interested’ in US F-35 Fighters – Indian Air Force Chief https://thedailycoin.org/2018/04/29/we-are-not-interested-in-us-f-35-fighters-indian-air-force-chief/

Seems you can’t read. I said F35 was offered only to the close allies, mever said that about F22. None of your links say Washington offered F35 to India.

It was obvious that Indian reaction was on US offer (Why would India’s chief of air-force comment on F-35 if it wasn’t so?! You take him for an idiot?) I can’t waste my time to look for links and if you want to chose article where explicitly US offers F-35 look for it yourself !

How do you react when not invited to a party? By saying you are so busy you wouldn’t go to that party anyway. The first one of your your links made clear that Pentagon didn’t offer the plane to India.

I am tired of this conversation They most definitely DID offer officially F-16 + F-35 later on, down the road (when all ordered F-35 are delivered to their regular customers) India has refused that offer. They have offered “F-21” as well.

Dude, you are wrong ! F-35 was indeed offered to India. Su-57 is not for sale on the export market, and won’t be offered for export until Russian Aerospace order is filled. Russia’s close allies like Iran will most likely have it’s order filled, before India, or other countries recieve any of these. US is busily upgrading F-15, and is producing new aircraft. Kinda’ like how Russia’s done with MiG-29. Russian Aerospace has the most upgraded version, MiG-29SMT, these aren’t being exported. Syria has a couple dozen of upgraded MiG-29SM version I think. These don’t have the increased internal fuel capacity. Your beloved F-22 and F-35 are, and always have been unfit for combat. Plagued by system failures, unreliable, impossible to maintain in combat conditions, increasing corrosion issues, and a “stealth coating that falls off the planes within days of new coating applied. They’ve been pulled from service in the Middle East, by US military. Junk.

F-35 was never offered to India.

Its the Indian strategy to lower the price. They do that every time, not only with Russia but with the U.S. and France too. How is the Su-57 underpowered when its matches the thrust to weight ratio of the Craptor and is more maneuverable, and that with the base engines… The new engine which is already in serial production will give it another 30% extra thrust , it will be the highest thrust to weight ratio amongst any jet with around 1.35 fully loaded.

Russia aknowledged the plane is underpowered.

No they did not. They wanted a new engine from the start, but it wasnt ready at that time. So they used the upgraded engine of the Su-35. The base engine is underpowered compared to the new one, but it isnt underpowered compared to the jet or the competition. To put it into perspective the Craptor and the Mig-31 use the most powerful engines on a fighter jet with around a 150KN thrust per engine. The base engine is around a 140+KN. The new engine is a 176KN at the start (stage1), with further improvements in the future 200KN is possible. Its anything but underpowered. Compare the F-15s puny 120KN per engine thrust to that…

Yes they did and promissed they will improve it and will come with a better offer. 2 years ago. But since Russian magazines called it ‘F-35 killer’ everybody realised it’s more a PR stunt than a plane.

You are delusional again… Never happened. And the Flop-35 lost even against an F-16, Rafale, and Eurofighter in mock combats. Its the biggest flop in aviation history. Air Force, Navy Marines started ordering F-15SEs and Sper-Hornets again, wonder why… Russians still rolling on the floor laughing getting $400million for the Yak-141 blueprints, the daddy of the F-35. Interestingly the U.S. never questioned why Russia stopped developing it when other projects kept going…lolz. Best trick Russia ever pulled. Costing $2trillion sofar…

Are they? U.S. said the same before Vietnam. Aside from that Su-35 and Mig-29SMT are more than a match at BVR. The Mig-31 and Su-57 are superior. Longer radar and missile range. Thats why the U.S is trying to acquire the MBDA Meteor ramjet powered BVR missile from the EU, originally developed for the Eurofighter Typhoon. It would tripple their missile range. But its still pending due to Trump-EU fute and cost issues. Adide from that they dont in the internal weaponsbay being longer than the AMRAAM.

Hey, that’s a big ass missile, I don’t know why would they put it on F-35, it won’t be stealthy at all. It fits well on F-18 tho. Btw do you have any info if Canada or Australia buys it?

Missile range is critical… Sofar only the U.S. is pending as far as I know. Big missile, but its worth its weight and size.

The firings of several heavy long range solid fuel missiles during the Iranian military exercises in the Persian Gulf prompted a military alert at two USCENTCOM Gulf headquarters – the Al-Dhafra Air Base at Abu Dhabi in the UAE and the Al-Udeid Air Base in Qatar. Troops were told to seek cover. “The incident lasted for a matter of minutes and an all clear was declared after the threat … had passed,” said Central Command spokeswoman Beth Riordan.

US newspapers published a graphic showing an American carrier into the shape of a casket with a set of crosshairs painted on it and a caption quoting Supreme Leader Ayatollah Ali Khamenei as pledging to avenge the US drone strike that killed top Iranian general Qassem Soleimani in January.

Iranian military also displayed real time satellite images of all major US bases in the region in an escalating psychological warfare aimed at demoralizing US troops facing uncertainty at home due to riots and Covid 19.