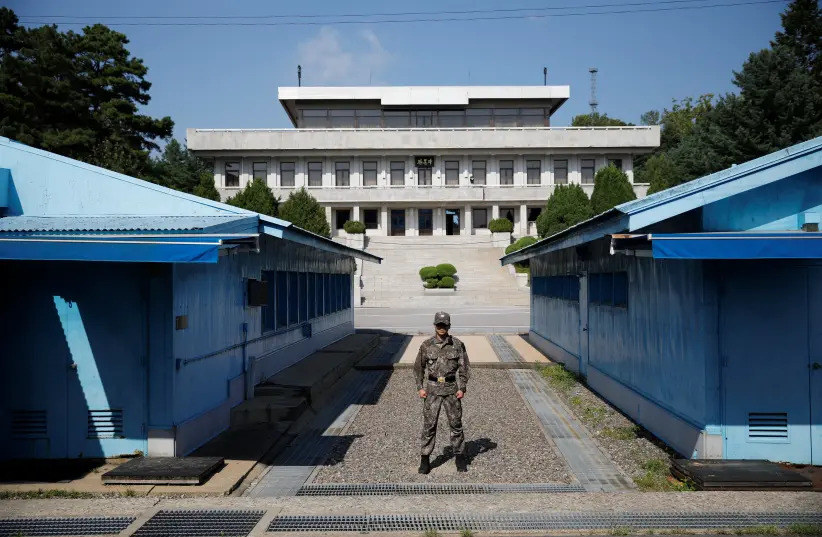 The Truce village in the DMZ between the South and North

South and North Korea have restored cross-border communications, just shy over a year after they severed them.

The two countries said that the move was an attempt to rebuild trust.

The decision was announced in statements by South Korea’s presidential Blue House and KCNA, the North’s state media agency.

KCNA said all inter-Korean communication channels were reopened, in line with an agreement between Seoul and Pyongyang’s leadership.

The Blue House said the restoration of communication lines would have a “positive impact on the improvement and development of South-North relations”.

KCNA also welcomed the “positive effects” of the decision, which it said represented “a big stride in recovering the mutual trust and promoting reconciliation”.

In a rare admission, Kim said that the North had faced serious issues in 2021, after it closed its border with China early in the COVID-19 pandemic.

In January, he told a party congress that the North’s five-year economic plan had failed in almost every area, amid chronic power and food shortages exacerbated by sanctions, the pandemic and floods.

In June, he described the food situation as “tense”.

South’s President Moon, who has long sought warmer relations with Pyongyang and is credited with brokering the initial summit between Kim and Trump in June 2018 and has called for a recovery of the hotline and stalled denuclearization talks.

North Korea severed the hotlines on June 9, 2020, in the wake of a failed February 2019 summit between North Korean leader Kim Jong Un and former US President Donald Trump, which South Korean President Moon Jae-in had offered to mediate.

North Korea lashed out at Seoul, and days later, it blew up a joint liaison office launched in its border town of Kaesong in 2018.

Before then, the hotlines were last cut in 2016 amid North Korean ballistic missile and nuclear tests. During that period, South Korean officials sometimes used a bullhorn to shout messages across the Joint Security Area (JSA) in Panmunjom, the only spot along the DMZ where troops from both sides stand face to face.

When the lines were restored in 2018, liaison officials spoke mostly using desktop telephone consoles dating to the 1970s, each the size of a small refrigerator. They would usually exchange brief greetings or notices, and fax machines were used to send detailed messages and documents, Seoul officials said.

“In January, he told a party congress that the North’s five-year economic plan had failed in almost every area, amid chronic power and food shortages exacerbated by sanctions, the pandemic and floods.”

You have a source for this? i doubt somehow that this was carried on DPRK state media…

Keep in mind he is way more progressive compared to the ‘Old” Guard of NK.

BULLSHT! Harden the fk up liar!

Good man,you picked up on the cowards lies. this is they fake deep state narratives,sure sign of the desperate failed empire which is franticely trying to cling onto their last few strands indeed:

North Korea would be doing fine if the U.S. and it’s UN toadies would take their foot off of North Korea’s neck.

Australia exports coal to north korea,maybe thats why the septic nazis have it in for Australians too?

You are the one with a severe lgbtqrx mental health corona issues,not the more robust person.

Do you have any info, links, sources, videos on this propaganda, sf? Or you’re your self are part of western propaganda. These same claims one can hear all day long on cnn, fox, nbc, abc.

khazar toads you get them too,however this is a coward who wrote this crud,not sf responsability.

Who wrote this utter garbage? obviously some coward of the cia establishment,well fascist I GOT NEWS FOR YOU DEMENTY WANNABE KWEERS,only an idiot would believe in lies,the fact that north korea along with other far more vigorous intelligently trained peoples have more than enough muscle combined to defend what is theirs rightfully to defend unlike the defeated minions of the south there, you cannot expect civilisations to adopt your lgbtqrx ideology,is is simply too weak to prevail todays!