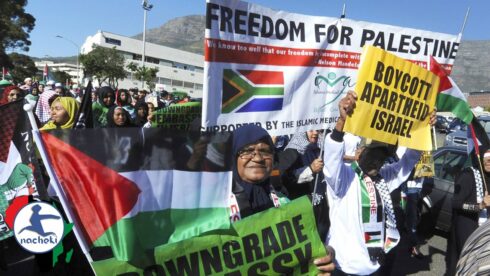 The Palestinian-Israeli conflict and the Abraham accords are still divisive issues for Africans.

South Africa (SA) has called for Israel to be declared an “apartheid state”, condemning some of its recent measures. In fact, since the Jewish state’s 2020 peace deal with the UAE and other states, the matter has polarized the Middle East and also Africa in general.

On July 26, in the capital Pretoria, at the second meeting of the Palestinian Heads of Mission in Africa, South Africa’s minister of international relations and cooperation, Naledi Pandor, referring to the occupation of large parts of the West Bank, said that the Palestinian situation “evokes experiences of South Africa’s own history of racial segregation and oppression.” Mentioning a recent UN commission of inquiry, Pandor claimed that the reports point to the fact that “the State of Israel is committing crimes of apartheid and persecution against Palestinians.”

Based on this, Pandor went so far as to say that Pretoria thinks it should be classified as an “Apartheid state”, and that the United Nations General Assembly (UNGA) should establish a committee for such a purpose. Later on, speaking to the state-run South African Broadcasting Corporation (SABC), Riad Malki, the Palestinian Foreign Minister, said that “if there is any country or countries that can comprehend the suffering and the struggle for freedom and independence of Palestine, it is the African continent and the people of Africa.” Pandor, in turn, stated Pretoria will push this cause at the UNGA and urged civil society to join such an effort.

Of all BRICS states, SA is arguably the one which has the worst relations with the Jewish state, and now they seem to be at their lowest level in years. At the July 26 United Nations Security council meeting, South Africa’s representative also raised the issue of Tel Aviv supposedly imposing an “Apartheid system”.

SA has remained a strong ally of Palestine and has consistently supported it on international platforms over the last years. This month, in an ambiguous message, the African National Congress (ANC) party, which has governed SA since 1994, announced it will review its policy towards Israel. It is unclear whether this means a hardening or a softening of its anti-Zionist instance, but many voices in the country are urging the ANC to push the government to close down the Israeli embassy in Pretoria.

The issue of Israel is a contentious one across the continent as well. Last year, when the Jewish state’s return to the African Union (AU) as an observer was being discussed, many key members of the bloc, such as Nigeria, Algeria, and SA itself, vehemently opposed it. Algeria, particularly, formed a bloc for that purpose. Previously, Israel was part of the Organization of African Unity (OAU), the predecessor organization of AU, but in 2002, when the former was dissolved and the African Union was created, Tel Aviv was deprived of its observer status, after pressures from Libya’s Muammar Gaddafi.

In February, the AU condemned Israel for its “relentless pursuit of colonization and annexation measures.” There are indeed obvious ideological and ethical issues underneath these stances on the Israeli-Palestinian conflict and such tensions have been polarizing the Middle East, too. They are also highlighted by the recent geopolitical reconfiguration of the very Middle East’s map, which impacts also on the African continent as a whole. This, of course, is all about the process that started with the expansion of the Abraham accords in 2020.

For example, in December 2020, Algerian then Prime Minister Abdelaziz Djerad denounced the Israel-Morocco deal in strong words, describing it as a “dirty alliance” between authorities in Tel Aviv and Rabab, through which the “Zionist entity” – as he described it – tried to be closer to Algerian borders. The agreement also concerned the Turkish officials in Ankara. These peace deals, in some cases, were followed by closer military ties, as exemplified by the November 2021 joint Israel-UAE-Bahrain naval drills. Such developments have raised some eyebrows across the Middle East and the African continent.

Moreover, previous US President Donal Trump’s recognition of Moroccan claims over the disputed Western Sahara region (maintained by Joe Biden) was a kind of a  “quid pro quo” move after Rabat normalized its relations with Tel Aviv. This American controversial decision added fuel to the fire in the region, escalating the Algerian-Moroccan friction, and also increasing tensions across Africa.

One should also keep in mind that SA’s foreign ministry released a statement reiterating its historic support for Palestine in August 2020 shortly after the United Arab Emirates (UEA) normalized its relations with the Jewish state.

The Netanyahu government clearly had an agenda for Africa, and took great efforts to revive its connections to the continent. It is still unclear what Yair Lapid’s new government’s view on the issue is. In any case, the Palestinian-Israeli conflict and the Abraham accords are still divisive issues for Africans.

It was the kikeroaches affiliated with tel aviv who toppled apartheid to start off.

That sheboon’s statement is utterly worthless, all in all.

Semitists like you are the most disgusting thing that exists, but don’t worry, your days are numbered…

Solidarity to Palestinians from a country that knows apartheid and the cancerous tumour of Zionism too well, bravo South Africa.

Onely country to call it what it is

Ahh please: ‘South Africa’s New President Receives a Rabbi’s Blessing The Rebbe’s assurance of safety and prosperity is recalled Twenty-eight years ago, Cyril Ramaphosa stood outside Cape Town’s city hall, holding a microphone for Nelson Mandela, who had just been released from prison. This week, days before he assumed the South African presidency, Ramaphosa stood at the very same spot, celebrating 100 years since his mentor’s birth, and received the blessings of Chabad-Lubavitch Rabbi Asher Deren, chairman of the Rabbinical Association of the Western Cape. Deren evoked the assurance of the Rebbe—Rabbi Menachem M. Schneerson, of righteous memory—addressed to the South African Jewish community, assuring them that South Africa would remain a safe and prosperous place to live until the arrival of Moshiach…’

It’s their president. And Ramaphosa is a Klaus Schwab men, part of the class 1993 of the zionist WEF ‘„Global Leaders for Tomorrow“ All his 450mil $ came from Oppenheimer – they adopted him…

as long as these “Jews” and especially their ideology is not outlawed, as long as these “Jewish communities” are allowed to exist among us, we should not be surprised that there is no peace and no future. Down with Semitism in all its manifestations or derivatives such as “Christianity” or also “Islam” away with this spiritual cancer!

why did he put the term apartheid and not israel in quotation marks in the headline? Is it because the author of the article is playing a double game?

I was going to question the use of quote marks around apartheid in the title myself, it isn’t as if its even remotely debatable is it.

The question is, what is worse? To live as a 2nd class citizen in a racist state that is being well run, vs living as a legally equal citizen in a state that is corrupt and economically mismanaged into the ground? I reckon that many blacks were better off in the old Apartheid era then under the ANC, because they are still poor, but there were some jobs and at least crime and corruption were not as rampant as they are under ANC rule. Similarly, Palestinians, who live in the pre-1967 borders of Israel and have Israeli passports but have to call themselves Israeli ‘Arabs’ and not Palestinians, they seem to be a lot better off then their counterparts who live on the Westbank under the rule of Abbas. Also reasonably content and a lot less inclined to use violence against the Israeli state.