“Huthaifah al-Badri”, a son of ISIS leader Abu Bakr al-Baghdadi, was killed by the Syrian Arab Army (SAA), while he was participating in an “Inghimasi” attack on the thermal plant in the central governorate of Homs, the ISIS-linked news agency revealed on July 3. However, Amaq didn’t reveal the exact date, in which al-Badri was killed. 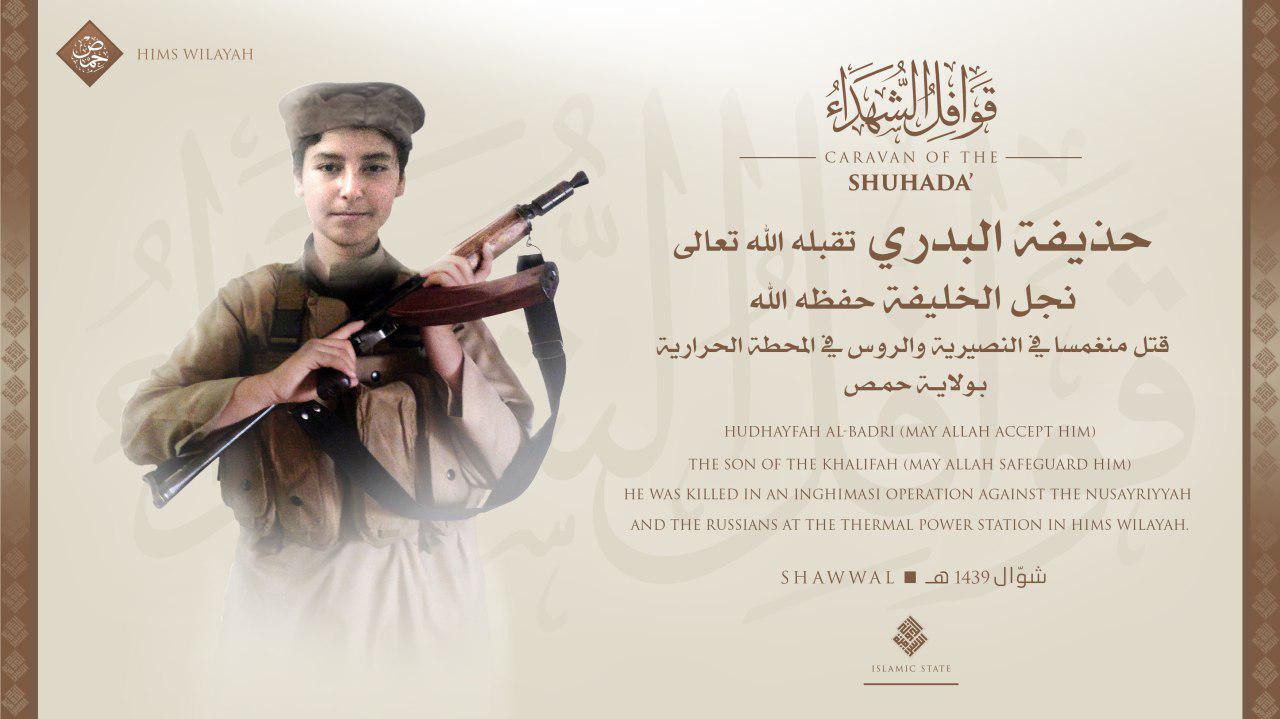 The Syrian Observatory for Human Rights (SOHR) said that the last two attacks of ISIS on thermal plant in Homs were on the 7th and 12th of last June, thus al-Badir was likely killed in one of these two attacks.

The mother of al-Badri’s is believed to be al-Baghdadi’s first wife, whom he married in in Iraq around the year 2000 after finishing his doctorate. The notorious terrorist leader has other wifes, including the infamous “Sujidah al-Dulaimi.”

Al-Dulaimi was arrested by the Syrian intelligence inside Syria in late 2013 or early 2014 before being released on March of 2014 as part of a prisoner swap. Back then, the deal was arranged by the al-Nusra Front, now known as Hay’a Tahrir al-Sham (HTS).

Later on November of 2014, al-Dulaimi was captured once again, this time by the Lebanese authorities inside Lebanon. The capture was reportedly the result of a joint intelligence operation by Lebanon, Syria and Iraq, with the U.S. assisting Iraq.

Despite that ISIS has lost tens of thousands of its fighters since its raise in 2014, al-Badir is the first close relative of al-Baghdadi to be killed in action, which exposes the double standards of the terrorist group.

LOOK FIRST WHO TOLD THIS => the cockroach from COVENTRY, the MI6-propaganda -“weapon” for Syria:

The little pYg is declared dead.. and enjoys his vacation as “Mossad-vet” in Israel or Britain, maybe in Florida or Hawaii..

Have some respect for the dead.

“Fuck him, the dead piece of murdering, inbred POS. May he rest in pain, in hell for eternity, you complete CnUt”.

Good, now the rest take turn, to join him.

Good news nice next is baghdadi himself

“Son Of ISIS Leader Abu Bakr al-Baghdadi Killed By Syrian Military” “The Syrian Observatory for Human Rights (SOHR)”… aaaaaaaaaaaah!.. This is the MI6-funnel from Coventry. So, it’s rather like: the little Mossad-breed enjoys his vacation in England or Israel. I bet that this one, too was “killed” like Osama bin Laden :))))

One less jihadi, but sad to see a child brainwashed by a maniac father and this is the kids end.

Rest in peace kid. You certainly didn’t get it here.

Poor little Cuz. His young life was wasted by his Bearded Daddy.

News like this should bring joy and laughter into everyone’s life.

Hunt down and catch and kill them all. Make absolutely certain they are Dead and feed them to whatever form of rats surround them