A new political shift seems to be developing in the African Horn region. Somalia is traditionally in the center of these developments. Today Somalia is a formally federal republic that includes 6 autonomous entities. In the north it is divided up among the regions of Puntland, which considers itself an autonomous state, and Somaliland, a self-declared unrecognized sovereign state. Jubaland is an autonomous region in southern Somalia that appeared on some maps a couple of decades ago. In central Somalia, there are Galmudug the South West State of Somalia and Hirshabelle. The capital of Somalia is Mogadishu, the most populous city in the country and is an important port connecting with traders over the Somali Sea.

The central authorities of Somalia stay quite weak, which is due to internal contradictions, low motivation of the armed forces, and mainly to the wide spread of various terrorist groups on its territory. These factors lead to the division of the country and the acquisition of greater independence by the regions.

The 15th of June, the Somalia Central government was forced to officially recognize Ahmed Mohammed Islam Madobe as the “interim President” of the Jubaland.

Jubaland itself represents an arid region with a small population, where is no developed road system or navigation, which makes it dependent on neighboring regions.

It has been seeking autonomy since 1998, but due to clashes between its clans, the final agreement was reached only when the region had been flooded with Harakat al-Shabaab al-Mujahideen, a terrorist group linked to Al-Qaeda. With the support of Kenya and the African Union Muaskar RAS Kamboni militia, led by Ahmed Mohamed Islam, managed to dislodge al-Shabaab from Jubaland in late 2012. In 2013 Madobe was elected President, and in 2015 a Parliament was formed based on representation of different clans. Since then, Jubaland has been considered a Kenyan “buffer” against al-Shabaab, and therefore is extremely important for the regional anti-terrorist agenda.

Earlier, the administration of the current Somali leader, Mohammed Abdullahi Mohammed, refused to recognize its autonomy, but it was pressured by the UN. Probably, the United States is implementing its own interests in the region through an international organization. The Americans are clearly interested in recognizing a broad autonomy or even the independence of the region, since they maintain a military presence in its territory. Jubaland is of strategic importance because of its proximity to the border with Kenya, where the forward US operating bases Camp Simba and Mombasa are deployed. 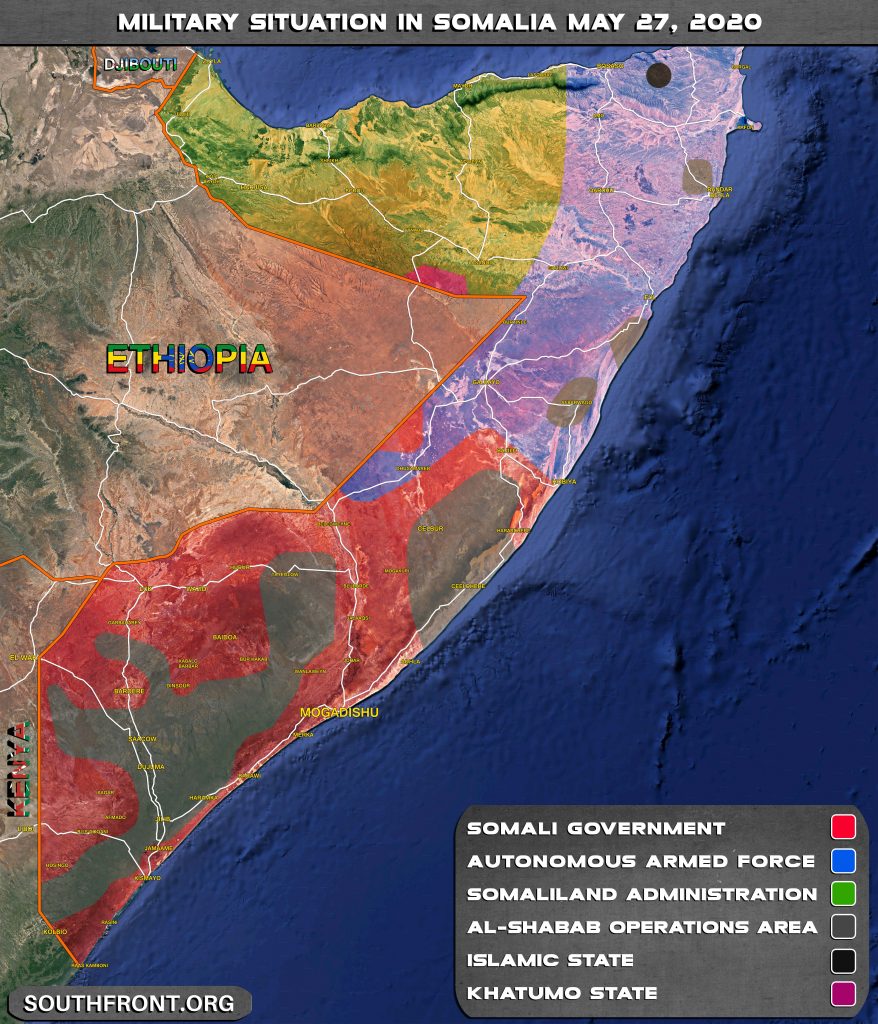 In general, the territory of Somalia is of great interest to both regional and global powers. Various international terrorist organizations also represent influential actors. All this contributes to the division of the country into de facto independent regions. Each of these regions has its own individual ethnic, religious, economic and natural characteristics. However, they are of different interest to external actors.

The situation in Northern Somalia stands out, where the autonomous self-proclaimed entity of Somaliland is located with a fairly strong vertical of power, ethnic uniformity, and all the signs of an established state. These facts force the government in Mogadishu to be considered with the regional leadership of the ruling clans of Somaliland.

Previous talks between the parties took place on 14-15 June in Djibouti in the form of  two – day summit. The Somaliland delegation was led by head of administration Muse Bihi, and the Central government of Somalia was led by President Abdullahi Mohamed Farmaajo. The negotiations, which the parties had placed high hopes on, ended without success after the representatives of Somaliland called for the recognition of Somaliland’s sovereignty to be included in the meeting’s agenda. Apparently, the position of the head of the Somaliland Parliament was influenced by the decision of the Central government to officially recognize the interim President of Jubaland, and the Somaliland delegation decided to put the issue of recognition of sovereignty back on the agenda.

Virtually the state of Somaliland is 29 years old since the unilateral Declaration of independence in 1991. All these years, Somaliland has been seeking an international recognition simultaneously building a state. As a result, Somaliland has reached a high level of stability. During the entire period of de facto independence, there were five presidents. All of them were chosen through democratic elections. Somaliland has stable customs inspections and its own armed forces. Currently, they count about 60,000 regular service members and even include a naval component.

The infrastructure is also being developed successfully. It is estimated that the total road network in Somaliland is about 9,035 km, of which 1,010 km are paved roads, 1,225 km are unpaved roads, and about 6,800 km of unpaved roads are tracks with difficult driving status, especially during rainy seasons. 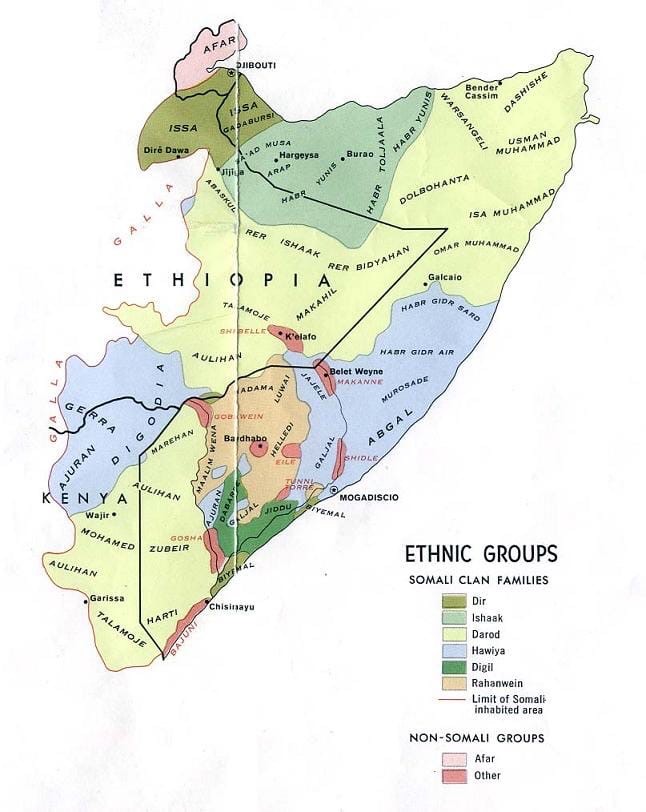 Despite the lack of international recognition Somaliland has political contacts with its neighbors as well as with Belgium, France, Ghana, Russia, South Africa, Sweden, the UK. It maintains representative offices without an official diplomatic status in Ethiopia, the UAE, South Africa, Sweden, Italy, USA and Kenya. Moreover, Ethiopia, Turkey, Djibouti, UK, Denmark, Kenya have diplomatic offices in Hargeisa.

For all that, Somaliland’s true diamond is the port of Berbera. The port capacity is about 100,000 containers per year. According to reports, the port is 51% owned by DP World, the third largest port operator in the world and a subsidiary of Dubai World, a holding company owned by the government of Dubai. The abundant support of the United Arab Emirates is connected with the transportation of livestock to the Gulf Countries through the port of Berbera. The livestock is among key export products of Somaliland itself and neighbouring Ethiopia. The UAE even wanted to place there its naval military base which could also serve the development of logistics for the Saudi coalition forces in Yemen.

A high percentage of ownership of the port of Berbera (19%) belongs to Ethiopia, for which it is a convenient and strategically important transport route. Moreover, Egypt has its own interests in the region. However, having a situational Alliance with the UAE to conduct joint military actions in Libya against Turkey, it does not pursue an active policy in Somaliland that could contradict its partner’s interests.

The US is also interested in the stable development of Somaliland, which could guarantee calm in the horn of Africa region and the safety of navigation. US military bases are located in Kenya, Uganda, and Djibouti, which, above all, help to contain the regional influence of Iran and China.

Thus, the current status of Somaliland is in the interests of leading regional and global actors. Factually, they are involved in an ongoing struggle for influence on the elites of this formation. At the same time, the deteriorating global economic situation and the growing contradictions between world powers may lead to an escalation of contradictions in the territory of Greater Somalia, which will affect all intra-regional political forces. The role of a global stabilizing factor could be played by the situational alliance of the US and China in this region, which is difficult to imagine in the future of one or two years.

Somali is our brother Country as Kenyans we stood with them through many years of wars. We host about 3 million Somalis as either refugees and registered and unregistered Immigrants. We have dedicated about a whole district to build the largest refugee camp globally, the Dadaab Refugee Camp. However, some of their citizens and a few sympathizers in Kenya support Al-Shabaab that kills Kenyans in malls and universities which I consider unfortunate. Secondly, their Intelligence agency has also been luring leaders of ethnic Somalis for some for secret meetings, unexplained reasons. We suspect they may be trying to destabilize North Eastern Kenya. Also, the leadership of the federal government is ambitious and has been claiming our territorial waters which I don’t thing will end well.

Wahhabi presence and American bases are biggest problem for Somalia. And therefore potentional danger for Kenya.

I Agree with you. The US has acted in a manner that suggest a symbiotic relationship between it and Al-Shabaab terror groups. Firstly, it was against Kenya pursuing the Al-Shabaab terrorists in “operation Linda Nchi 2011”, which Kenya launched after the terror group launched several cross-boarder attacks into Kenya. Secondly, the US refused to sanction Al-Shabaab even after it callously killed about 250 students in Garissa University. The same group had also killed 67 civilians in a shopping mall in Kenya’s capital. Thirdly, after the US camp Simba was attacked on 4th January this year (an attack which looked stage-managed) , the US rushed to blame Kenyan Soldiers, which is awkward. We don’t expected Kenyan military personnel to US soldiers in Camps.

Yes, because American bases there are only ment to protect Al shabab Wahhabis, that destabilize all region, including Kenya…

Dear Simon Ndiritu, big thank you for your comment. This is very interesting. If you want to provide your point of view in details, we will be glad to publish it on southfront.org as a valuable analysis. If you are interested, please, send your text to info@southfront.org Sincerely yours, SF Team