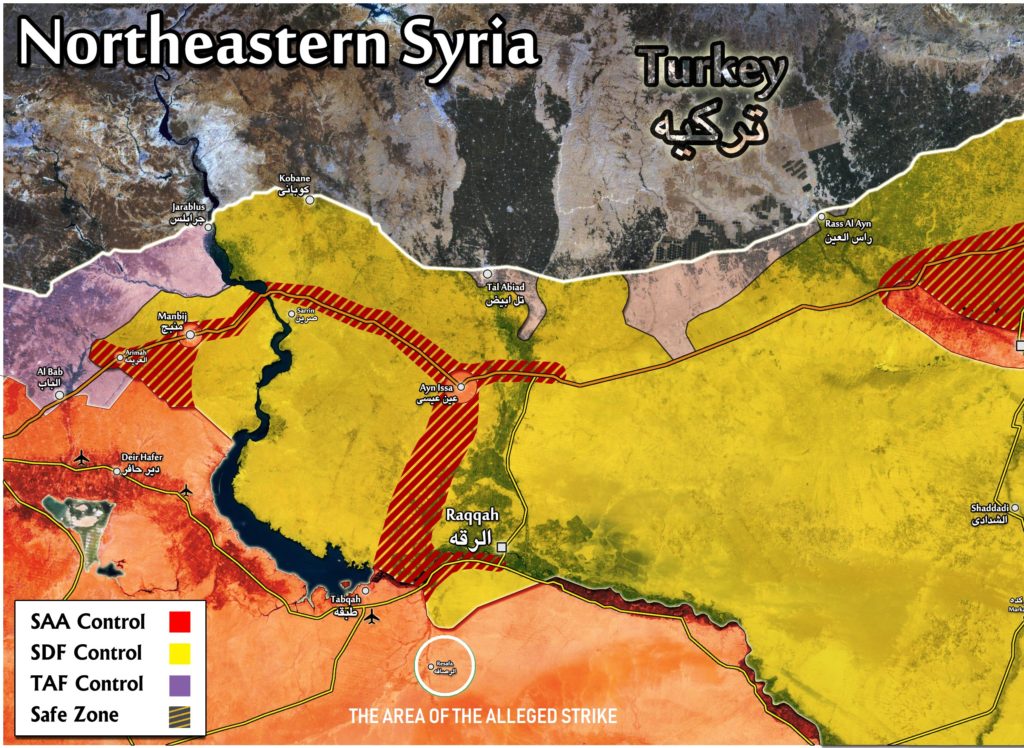 On October 13, the UK-based Syrian Observatory for Human Rights (SOHR) claimed that warplanes of  the US-led coalition had struck a convoy of the Syrian Army in the Rusafah area in the southern part of the province of Raqqah. The convoy was allegedly moving towards the city of Tabqah in the area controlled by the Syrian Democratic Forces. Since October 13, no reliable source has confirmed that the strike really took place. No photos or videos from the area also appeared.

The SOHR report was likely an attempt to fuel tensions between the US-led coalition and the Damascus government in an attempt to delay the implementation of the deal between the Syrian Army and the Kurdish-led Syrian Democratic Forces. More such fake news will likely appear in the coming days as the sides involved in the northeastern Syria standoff will compete for influence in the area.

Again, hey Kurds, this is the country that you guys sold your soul too. Only to have them sell your souls to the Turks.

Oh, it feels so great being able to say I told you so. So great I need a tissue right now.

And Barba, was wise and correct to no involve the SAA in a full scale battle in Idlib when the forces would be needed in the northeast, has we are seeing now.

I still think that Idlib was offered up to Erdogan as a prize for pressuring the Kurds to accept rule from Damascus again. We will see how far the Turks will advance and take in order to see if there was a deal or not.

Finally. SAA is retaking what’s Syrian, most of the fertile land and most dense oil fields where in the SDF held areas. Why did Kurds believe that they could hold that territory for longer time is beyond me.

Yes, these days they came to knowledge about the real situation rather late…They sided with the Yanks for too long and now must realize that their protectors go home and leave them alone. Never forget: International meddling US-forces are not trustworthy. You Kurdish leaders better step back now from any illusional imaginations about “Rojava-Land” and side with Baschar AlAssad and his friends – otherwise you might be lost in countless battles against a big army of fanatic Sunni Erdogan-fans…

SOHR can generate fake news when it’s MI6 paymaster demands it … these are bad times for the anglozionists, and tantrums they will have.

Perhaps these traitors will soon look for other jobs, within gov’t or the spook agencies of course. They are unemployable anywhere else.

Wonder if SOHR is wearing a flak vest in Coventry…..

Why do you relay such stupid fake news ?

Well, they did say it’s probably b.s. not in so many words, of course.

The source SOHR put me off reading the article. Wish Syria all the best.

You might like this AM: https://twitter.com/canthama Focus on Syria, have been reading it since early last year.

I have just been reading an article on RI, with regards the US handing over control of Manjib, to Russian and Syrian Forces. Must admit to being speachless, but, await the next couple of weeks, to see what else transpires. Funny, how the same week this happens, US and China have sorted out the problem with the US bankruptcy. Wonder if it is all linked and allows Trump to focus on his Presidential Campaign?

Hard to say, of course, but maybe, just (hopefully) maybe Trump is flexing his power a bit. I’m very pleased for the Syrians, and it further puts Statesman Putin not just head and shoulders above ALL the other (combined) leaders, but towering so high I hope he can still see them below. :) Wouldn’t want him ‘accidently’ stomping on them, might soil his shoes. And just imagine AM, if all (well ok realistically most?) other leaders acted the same, how much better this world would be.

If the ME gets sorted, then hopefully there is hope for the world.

Love the comments on the link. Especially Vanessa Beeley.

I wonder what they all had to talk about and if any messages were relayed in those good old fashioned chats over coffee?

BMWA1
Reply to  AM Hants

Is it the smell of his fish-and-chips?

AM Hants
Reply to  BMWA1

Haha, being English I can handle the smell of fish and chips. It is just the rest of him, that I find offensive.

“The SOHR report was likely an attempt to fuel tensions between the US-led coalition and the Damascus government in an attempt to delay the implementation of the deal between the Syrian Army and the Kurdish-led Syrian Democratic Forces. More such fake news will likely appear in the coming days as the sides involved in the northeastern Syria standoff will compete for influence in the area.” That is EXACTLY what this is!

Please don’t give the terrorist Osama Suleiman a platform – just don’t. He doesn’t deserve it.

That SOHR guy (it’s one guy) in London is pro-“militant” that is, pro-terrorist, and is probably trying to stir up shit (fuel tensions). See Vanessa Beeley on that guy.I wouldn’t trust a thing he says.

He has a very good life in Blighty and will be buried here. In the meantime, Syria is just a cash cow for him to fuel his lifestyle off the taxpayer via a stupid and corrupt British gov’t and their spooks.

What a stupid, blatant lie. I don’t know why they SOHR needs this, maybe only to discredit it self.

You were right the first time, they are stupid.

If the SOHR, based thousands of miles away and funded by the British gov’t, says it’s all true, then we as tax paying morons, should believe it without question. Well done SOHR on another sterling report of nonsense. You’re becoming more irrelevant every day.

Guys, let’s donate. I donated, and I’m quite poor.