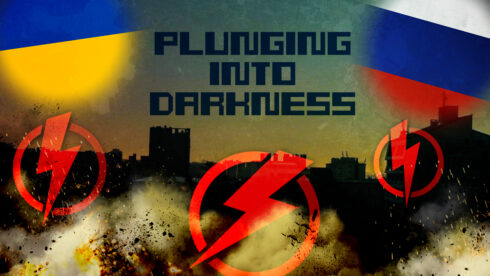 Since the early morning on October 22, Russian forces have been launching missile strikes across Ukraine. Interruption of electricity, water supply and problems with communication lines are reported in almost all regions of the country. The Ukrainian services have already assessed that the scale of damage to Ukrainian energy facilities on October 22 is “comparable or may exceed the consequences” of Russian strikes from October 10 to October 12.

Air alert is still sounding throughout Ukraine. In several regions, including in the capital and the Kiev region, it sounds for the third time since the beginning of the day.

So far, explosions thundered in the following regions:

Several explosions thundered in Kiev. The mayor of the city Vitali Klitschko confirmed the strikes but did not reveal the targets. The local authorities confirmed that air defense systems were activated in the Kiev region. Residents of the region were urged to stay in shelters. A curfew from 11 pm to 5 am was declared in the region since October 23.

In the Odessa region, Russian missiles hit the Podolsk district, the village of Alexandrovka, the towns of Usatovo and Mayaki. The targets likely included military facilities used by the AFU as well as the local energy infrastructure facilities.

The local authorities confirmed explosions at an energy infrastructure facility. The attack resulted in cut off electricity supplies in several settlements of the region. Judging by the map of power outages, it may be supposed that the energy substations of Usatovo, Podolsk, Ajalyk, Novoodesskaya were damaged.

A Ukrainian Su-27 fighter jet chases a Russian cruise missile in the sky over Odessa :

Power plants were damaged in the Rivne region, the head of the regional military administration Vitaly Koval confirmed. Electricity was cut off in several districts of the city of Rivne. Explosions were recorded in the Volyn region. The head of the region confirmed that an energy infrastructure facility was damaged. Mayor of Lutsk reported damage to the power plant, which left part of the city without electricity.

In the Khmelnytskyi region, the Khmelnitskaya 330/110 kV substation once again was hit by Russian missiles.

In the Kropivnitsky region, the authorities confirmed the strikes in the Khmelnitsky and Shepetovsky districts, power supply was disrupted there. Footage from the area confirmed that the power station located near to town of Dolinskaya was hit. Power outages were also reported in the Golovanevsky and Kropivnitsky districts of the region, which could be a result of an attack on the Pobugskaya substation.

All regions of the country faced interruptions in electricity and water supply. Operator of Ukrainian railways “Ukrzaliznytsia” reported that some railway sections are de-energized, trains run under backup locomotives.

The air alert has been sounding throughout Ukraine since October 10. In turn, the Russian Defense Ministry has repeatedly reported strikes on military command facilities and the energy system of Ukraine. On October 8, a terrorist attack took place on the Crimean Bridge, in the organization of which Russian President Vladimir Putin accused the Ukrainian special services. He also said that in case of attempted terrorist attacks on the territory of Russia, Moscow’s responses would be tough.

Attacking power stations and water supply facilities is not a major achievement. Try to recapture lost territory if you can.

Azov is not an Ukraine sea
Reply to  Russian

USA and NATO attacked power stations and water supply facilities in Irak and Serbia…so nothing special!

Assad Defeated Zionists
Reply to  Azov is not an Ukraine sea

Nuclear Weapons are a psy-op. Do a deep dive into H.G. Wells. This was an elaborate hoax to bluff the rest of the world into obeying the zionist’s 1000 pound gorilla America. Look at how well it worked. The Venetian Black Nobility run the world via the Vatican and the jesuits who use the freemasons as their minions. The war has always been the commoners against the Dark satanic oligarchy that seeks to dominate via a one world masonic government. Russia and China are also controlled by this cabal, don’t be fooled by the machinations . All the world is a stage, don’t be fooled. Peace on Eath: Goodwill to the Righteous.

I think so, too. There’s no atomic winter in Hiroshima and Nagasaki. The mere fact they used it in the atmosphere, should raise some questions.

Stark Reality Exposed
Reply to  Azov is not an Ukraine sea

Lots of chemical plants, includig ammonia and chlorine storage tanks as well, bridges with and without pedestrians and a whole lot more. Took out Belgrades electric grid on day one I think.

There used to be lists of all of NATO’s targets on the internet. Spent 10 search pages looking for them with no luck. Looks like they’ve been scrubbed.

No wonder. Can’t leave any precedents behind. Russia is doing NOTHING NATO hasn’t done, in spades.

Here’s how NATO bombed a civilian train and killed 55 passengers. Has Russia done that yet? Hmmm?

Fuck Ukraine. Wipe it off the map. They are ten times worse than the Serbs ever were. More like the Croats in the 1940’s.

The Serbs might not have exactly been what they were portrayed as being, the internet was less available to see this in the West at the time though. The Serbian language is closely related to Russian and shares many words incidentally. RT has published some interesting articles on this, e.g. : https://www.rt.com/news/552650-nato-bombing-serbia-remains-unrecognized/

Gee, no kidding
Reply to  Nobodyinparticular

Western propaganda wars. It was just a warm up for Ukraine.

That fascist clown Zelenskyy is getting desperate. If Russia keeps striking Ukraines power generating soft underbelly, his own henchmen will get rid of him before the winter is over.

Nah, Yarosh’s son is too busy beating gypsy girls with dildoes on the streets of Kiev and the rest of them are too fat and lazy from all the vig they’ve skimmed off deadheaded western donors to kill off their meal ticket.

Is it safe to say that the sons of today’s Ukrainian leaders are morally on par with Saddam’s Uday and Qusay but with only half their intelligence?

No one but nobodies ever said it was.

AmeriKKKa was never a Christian nation.
Reply to  Russian

Oh it’s coming motherfucker, winter is just around the corner.

Russian
Reply to  AmeriKKKa was never a Christian nation.

Nothing will come you son of prostitute.

Putin The Great
Reply to  Russian

It is high time to supply Ukraine with anti-aircraft weapons. Then it will be easier to control and establish a no-fly zone over Ukrainian territory for the Russian army.

AmeriKKKa was never a Christian nation.
Reply to  Cop

You living in the matrix.

Cromwell
Reply to  AmeriKKKa was never a Christian nation.

Matrix of his creation. Shitskin is vainly trying to conjure it up to reality 😆😆😆

Clearly, not enough. Ukraine must be destroyed.

Already nazi kkkraine switched to diesel locomotives because electric power is very scarce. Also, no power, no vehicle repair. Next shot will be rolling stock depots and bridges over Dniper. And one good mention here: russian is no more going into the initial anglo-zionazi trap of intentionally reporting overrated destruction to believe targets were destroyed. No, you fascist Ze fag scum ! Now they will allocate a +20% of ‘overdestruction’ to be sure that all that was designated to be destroyed WILL BE destroyed TOTALLY. Crock kikejoos reported 30% destruction when the reality was only 15% and the other 15% were repairable. I estimate that in this rate of relentless daily bombing in 10 days KKKrainii will have only 10-15% power which cannot sustain anymore any war effort. The problem is that the pace must not be stopped under no circumstances to not let ukraps to develop a strong AA defense, mostly related to a predetermined missile trajectory path. So, more night hell mopeds, more Kinzhals, more kalibr, more Iskanders, and imho more Kh-101/102 performance ones !

AliG
Reply to  Putin The Great

Gasoil locomotives will not help Ukraine. Petrol and energy is although rare in the EU and USA. Noone will gift them the fuel or electric power because they all have to less in the west. This is a real bad story for NATO.

The Russian efforts bring now success. No trains mean no easy supply of weapons and soldiers. Why did they do so late? Some month before this would have prevented the counteroffensives.

Now it will get winter let’s see how ukrainan folk could survive without energy and water. I fear that there will die to many brave and innocent people. Maybe you could offer each oblast water and energy if they change the side of war they support? As a major or administrative who cares about his/her people you should think about the possibility to surrender your city or region to Russia in order to survive with electrical power and water.

Snagger
Reply to  Ramses the Twink

Russian military operation in Ukraine has been mostly failure. There is no credibility of claims of Russian MoD.

Now USA and others have begun rumblings (to condition people’s minds) of overtly putting NATO troops on the ground in Ukraine if “Putin does something really horrible” translation “big false flag if Russia makes big gains.” They are planning for NATO troops to go in, yes, but not under the NATO banner, but under a differently named one-time coalition of armies that just so happen to be NATO armies.

why do the ukrainian NAZIs still have fighter jets?

The answer is an old Polish joke I think.

Last one to leave Ukraine, be sure to turn the lights off and lock the door behind you.