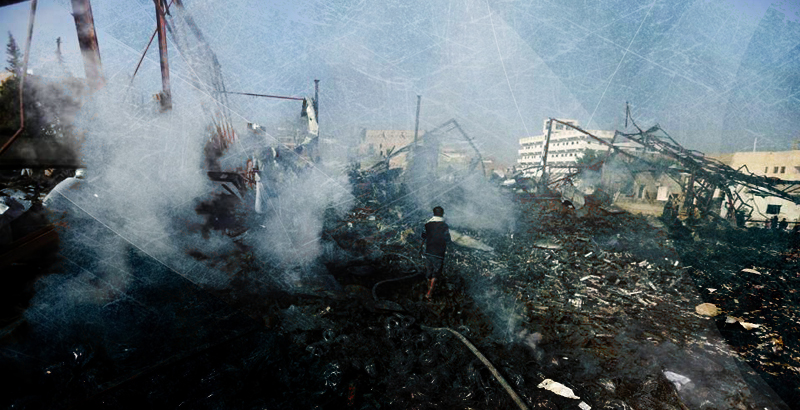 Dozens of supporters of the rebel movement Ansar Allah were killed in the Northern Yemen as a result of the Saudi-led coalition’s airstrikes, the Al-Arabiya TV channel reported. Coalition air raids were carried out at the Yemeni border, near the Saudi city of Najran, on Tuesday morning.

The airstrikes were conducted after five Saudi soldiers had been killed in the area a day earlier. The Ministry of Interior Kingdom of Saudi Arabia blamed the Houthis units for the deaths of soldiers and attempts to enter the Saudi territory.

These events took place against the backdrop of very vague and contradictory information about the prospects for the resumption of peace talks in Kuwait. The Kuwaiti government ‘intimidates’ the participants and co-sponsors of the process, putting forward an ultimatum that the negotiations must reach a breakthrough result within two weeks, or Kuwait will no longer provide a platform for them.

The very same time, Saudi Arabia threatens the Houthis to start a full-scale war in the case of their ‘stubbornness’ during the talks in the Kuwaiti format. In fact, these threats seem to have little to do with reality. Most likely, the negotiations will not bring any results because the conditions of the sides are not feasible. The Houthis and the former president of Yemen, Ali Abdullah Saleh, demand direct talks with Saudi Arabia, while the Saudi-backed Yemeni President, Abd Rabbuh Mansur Hadi, wants the Houthis and forces loyal to the former president Saleh to surrender their weapons.

Against this backdrop, armed clashes in Jizan and Najran have become fiercer. According to media reports, the Saudi-backed forces launched an offensive on the city of Caral in the region of Hajj, while the Houthis began armed provocations on Saudi territory in response to the attack on the city.

Speaking about the pro-Saudi media statements about a possible advance on the Yemeni capital of Sana’a by local tribes and the Hadi forces, supported by coalition aircraft, there cannot be any ‘victorious march’ in this direction. The Houthis and forces loyal to the former president Saleh have considerable combat potential and arsenal of various weapons. They confirm this every month, defiantly firing Scud missiles at Saudi territory. The Houthis still regularly receive weapons from the established smuggling channels in the south of the country. At the same time, they also buy weapons from members of the southern Yemeni groups, that are supplied with weapons by Saudi Arabia and the United Arab Emirates to fight the Houthis. In this way, the logic of events allows to suggest that soon the conflict will move from the sluggish phase in a situation of open war.

This has actually been a struggle going on for decades. On and off. Their are only two ways to end this… Either Saudi Arabia conquers the capital of Yemen. Or the Houthis Ansar Allah will have to go and take the Saudi capital. This war will go on and off for decades more until one finishes taking the other. Basic, simple, logic. Many uninformed would say “Houthis cannot make it to Saudi’s capital” But actually, #1 The Saudi civilian population has no weapons. Even if they were handed weapons, they would be incompetent to use them with any effectiveness. #2 Saudi solders are unmotivated fighters, and lack intelligence. Being barely able to follow some basic orders half way. #3 Saudi solders are poorly coordinated, and cannot take initiatives well. They are ripe for conquest. Or at least to the point where they lay down their arms and sign papers giving back to Yemen the lands they stole in the war about 15 years ago. #4 SAS are spread to thin (from Norway to Yemen and everywhere in-between) to properly prop up their favorite dictators of the Saudi crown under a more heated exchange. #5 The Saudi dictators will have to flee and move in with the Queen dictator of the UK-Empire where they will live happily ever after.