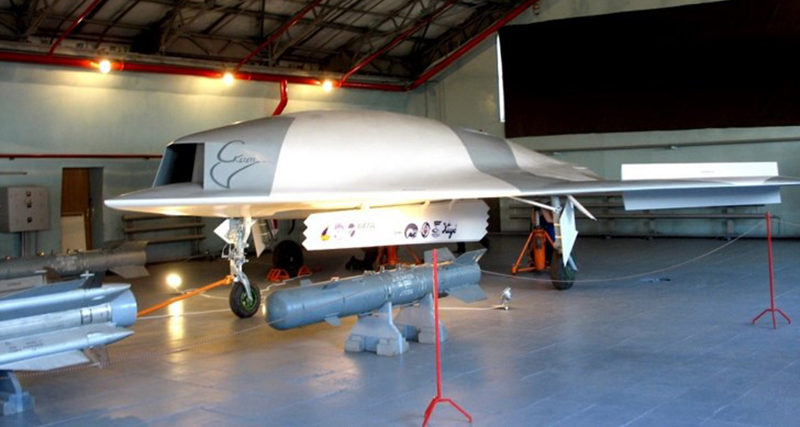 Russia restores a missing link in the Aerospace Forces system

The Russian army will begin in 2016 to receive new pilotless craft (drones), capable of handling long distances. In particular, devices will arrive in the pilotless aircraft divisions of the Eastern Military District. Earlier, the mass media had information that in 2016 promising drones capable of covering up to a thousand kilometers will be armed.

As suggested by experts, this is a question of heavy strike systems weighing between 1 and 20 tons. Heavy devices can carry onboard several bombs and even ground- to-air missiles. At the current moment, the Russian Army has no strike systems or modern devices capable of long-distance reconnaissance.

The Russian defense industry complex began work on creation of such drones in the mid 2000s, but according to Anatoly Serdyukov the matter was limited to demonstrating prototypes or attempting to buy drones from Israel. Plans are to completely fill in this missing link in the Aerospace Forces system of the Russian Federation by 2020.

In January, 2015, Deputy Minister of Defense Yury Borisov announced that in Russia a heavy drone capable of conducting reconnaissance and destroying targets had been created. The tactical and technical characteristics of the device are to be kept secret. According to the mass media, the Sukhoi Developmental Design Office (Moscow), Sokol Developmental Design Office (Kazan), and CJSC Tranzas Aviatsiya (St. Petersburg) are working on the heavy drone project.

In early October, 2011, in a competition run by the Ministry of Defense to create drones up to 1 ton in weight, the Ambler design won, and in the one up to 5 tons, the Altius-M design won. Offensive operations drones up to 20 tons are being developed by the Sukhoi Developmental Design Office, on the basis of the Skat project with which Russian Aircraft Corporation MiG has been engaged since 2005. The new project received the name Okhotnik [Hunter].

According to unconfirmed data, the Okhotnik will at the same time be a sixth generation fighter. Its first flight is expected in 2018, and its introduction into operations in 2020. Like the Skat, the new drone will have the shape of a flying wing (a so-called “flying saucer”).

At the same time as the Okhotnik, Sukhoi is conducting developmental work to create a medium-range system, the Zenitsa, with a velocity of 800 kilometers per hour. Supposedly, this drone is being created based on the Tu-143 Reys, which was developed in the 1970s, designed for tactical reconnaissance in the front zone.

An additional project of the Russian AFS is the Dozor-600 [Patrol], which belongs to the class of heavy medium-altitude long-flighttime drones. Experts suggest that the device is a direct analog of the American MQ-1 Predator. Despite the fact that the Dozor-600 weighs 720 kg, it is capable of carrying out the functions of an offensive operations drone.

Russia is catching up with the USA

The range of use of pilotless aircraft is extremely broad, but it has special value on a modern battlefield. Operation of aircraft is much more expensive, and their flight is interlinked with risk to the life of the pilot: air defenses and the opponent’s air forces do not sleep, and anything can happen in the sky.

Therefore a reconnaissance and strike drone is an excellent assistant to military aircraft and ground forces. In the future, drones will be able to carry out the most risky missions, on which there is apprehension about sending aircraft, ground reconnaissance, and special troops.

The value of drones for efficiency of action of the armed forces was recognized in the Ministry of Defense of the Russian Federation after the conflict to Georgia in August, 2008, in which the enemy quite successfully used systems of Israeli manufacture. Originally, in order to eliminate a backlog in the area of drones, a decision was made to import systems from the Israel Aerospace Industries company.

However, the practice of purchasing foreign equipment, which was applied widely by Serdyukov, was quickly stopped. The Israeli party refused to sell more of the sought-after heavy pilotless systems after delivery to Russia of the small and medium drones Bird-Eye-400, I-View, and Sercher Mk. 2.

In 2012, Deputy Prime Minister Dmitry Rogozin declared that the Russian Army will have its own offensive operations drone, which will not be inferior to the American analog. Mass receipt of pilotless craft in the armed forces of the Russian Federation began in 2013. At the same time, the Russian AFS has drones of short and average range (primarily the Orlan [Sea Eagle], Reys [Flight], and Strozh [Martin]).

Only the USA and Israel possess full-featured offensive pilotless aircraft. Russia along with China is in the list of countries catching up. In the USSR, drones began to be created from the 1950s. Drones were generally used in interests of the Chief Intelligence Directorate. These were small-dimension supersonic high-altitude devices, distinguished by their high performance for the time. In addition, drones were actively used in the USSR as “aircraft targets” for fighter aircraft training and firing practice from antiaircraft installations.

The founder of the portal Military Russia, Dmitry Kornev, noted that the West realized the possibility of broader use of drones somewhat earlier. In the Soviet Union, the drone “boom” occurred later, in the mid 1980s. During this period Yakovlev’s Developmental Design Office created the Shmel-1 [Bumblebee] device, advanced for its time.

“With the fall of the USSR developmental and production work naturally stopped. Enterprises focused on the Ministry of Defense did not makes drones as there were no orders, and private manufacturers appeared in the Russian Federation only in the late 1990s to early 2000s”, stated Kornev.

The abolition of the USSR led to degradation of the defense industry complex and, as a result, of pilotless aircraft. Russia missed a key trend in the area of drones – away from miniaturization and towards creation of heavy drones. During the period of troubled years in our country, such important sectors for development of promising drones as microelectronics and robotics lost ground. Also, the Russian MIC has problems with development of software and operating systems necessary for functioning of drones.

Dmitry Kornev considers that the Ministry of Defense has learned its lessons and that essential work is proceeding. According to the expert, one option for additional stimulation the drone sector is state investment in commercial production, since the universality of function of reconnaissance drones does not presume any special mode of privacy,

An excellent “test range” for battle testing offensive operations drones is the air operation in Syria. Currently only reconnaissance drones are carrying out this task in the Syrian sky . Considering the Ministry of Defense plans that have been announced, it is possible to consider that heavy drones will be used in the Syrian operation in 2016.The tragic incident with the Su-24M once again testifies to the need for urgent receipt of offensive operations drones by the ASF.