According to a leaked secret report from the German security authorities, about six million migrants are going to enter Europe. 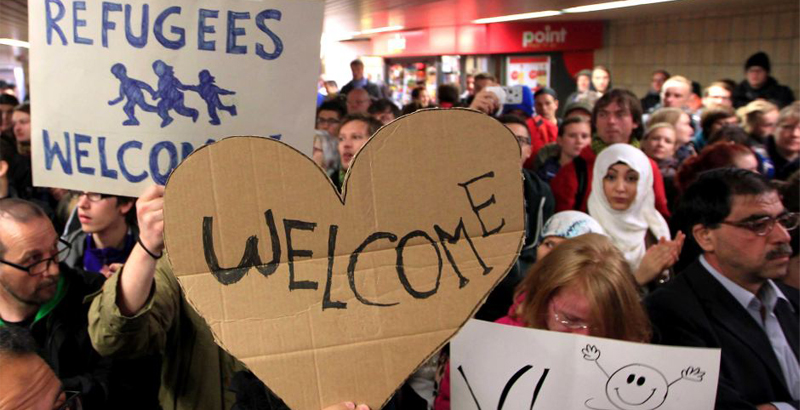 Wellwishers waved to and clapped migrants as they arrived at the main railway station in Dortmund, Germany (Photo: Reuters / Ina Fassbender)

At least 5.95 million migrants in countries around the Mediterranean want to enter Europe, the Bild newspaper reported, citing a leaked secret report from the German security authorities. According to the OE24 TV-channel, about 2.93 million migrants only in Turkey are going to seek an asylum in western European countries, such as Germany.

As the report revealed, there are 1.2 million migrants in Libya, who intends to reach Europe. The number of migrants in Jordan, which has taken a large amount of Syrians, fleeing the civil war, was estimated at 720,000 people. The document also mentioned Central African migrants, who reportedly come to Libya and Algeria after travelling to Mali and Niger, which have become hubs for migrants.

According to the report, last year, the sea to Europe was crossed by a record-breaking number of migrants, the most part of whom arrived to Italy. Though, the Italian government has promised to crack down on illegal migration this year, so far there has been just little slowdown in the number of migrants arriving.

Last year, a similar migration report was published by the European Frontex border agency, according to which the level of African migration would rise in the coming years. The agency noted that the main reason of this increase would be economic situation in highly populous west-African countries.

Last month, the Austrian military intelligence service released a forecast, claiming that up to 15 million migrants could come to Europe by 2020. The forecast also mentioned the increase of West-African migrants as a driving force for the increase in numbers.

Meanwhile, popular European cities continue to lose tourists and tourism incomes due to ongoing fears of terrorist attacks, which are committed by migrants.

So, Paris and the surrounding region lost 1.5 million tourists on 2016 as visitors, as well as 1.3 billion euros in tourist income, while the number of nights spent by foreign visitors in the region’s hotels also fell by 10.8 percent, the Comité Regional du Tourisme reported.

According to the committee, some sights “have suffered deeply from the lack of tourists and cancellations by school groups.” In particular, the Louvre museum saw a 13.3 percent drop in visitors last year, while the Arc de triomphe and Disneyland Paris lost 24 and 9.5 percent of its visitors respectively.

The South Korean government even has warned its nationals from visiting Paris as tourists, after one of the Korean tourists was robbed in the city’s suburbs earlier this month. The move is supposed to cause further damage to France’s ailing tourism industry.

What did the European vassals of the USA expect? These little puppets, lapdogs, supporters of the US perpetual war policy are reaping what they have sown. If they had not intervened in Afghanistan, Iraq, Syria and overthrown the Quaddafi government in Libya, they would not face this human onslaught.

The German open door policy has put millions of Africans , Asians and peoples from the Middle East on the road to Europe , on the hope of a new life . Compare 2 – 5 dollars a day to double or triple that per hour , who could blame them ? How many will die en route ? The smugglers are making large coin , even if they drown half of their cargo . The refugees of war are enormous enough , this wave out numbers them vastly . Europe must wake up .

What is it with this friggin 6M number? Everytime I hear it, the word “FAKE” appears in my minds eye… like a warning from a Higher Power….