Late on June 24, ISIS cells carried out a well-planned attack on the Iraqi Federal Police in the area of Daquq in the southern countryside of Kirkuk.

The terrorists first raided a police checkpoint located in the village Ghidah. A police officer was killed and another was injured. The terrorists also destroyed a thermal surveillance camera that was installed in the checkpoint.

After the raid, the terrorists ambushed police reinforcements near the checkpoint. A Humvee armored vehicle was destroyed with an improvised explosive device and a rocket-propelled grenade. The terrorists killed five police officers in the ambush.

ISIS news agency Amaq said that the terrorists seized two assault rifles and a RPG-7 launcher before fleeing the scene. The agency shared horrific footage of the attack on June 26.

While Amaq claimed that a total of six policemen were killed in the daring attack, Iraqi sources said only five lost their lives fighting ISIS terrorists.

ISIS cells have been very active in Kirkuk, especially in Daquq. Recently, local sources revealed that the group displaced the residents of seven towns and villages in the area. The terrorists attack the locals to steal supplies and food on a regular basis.

The terrorist group’s growing presence in Kirkuk’s countryside requires a serious response by Iraqi government forces. This is yet to happen.

I guess the CIA talks in Arabic and praises ” Allah ” every 10 seconds now.

If it serves their purposes, yes. It‘s no more mendacious then if those supposed „Muslims“ do it. As for Arabic… who says the CIA can‘t recruit native speakers of Arabic?

when a nation is infected by amerikan disease, this always occurs

You are quite obviously a COINTELPRO with no common sense. A robot with no mind other than to obey mindlessly without further question.

Jews control America, pointing out the obvious somehow amounts to an “inferiority complex” as I am a realist; it’s quite obvious they rule America through highly conceited means, as they do Russia and the rest of Europe and Asia. They rule all six-seven continents. 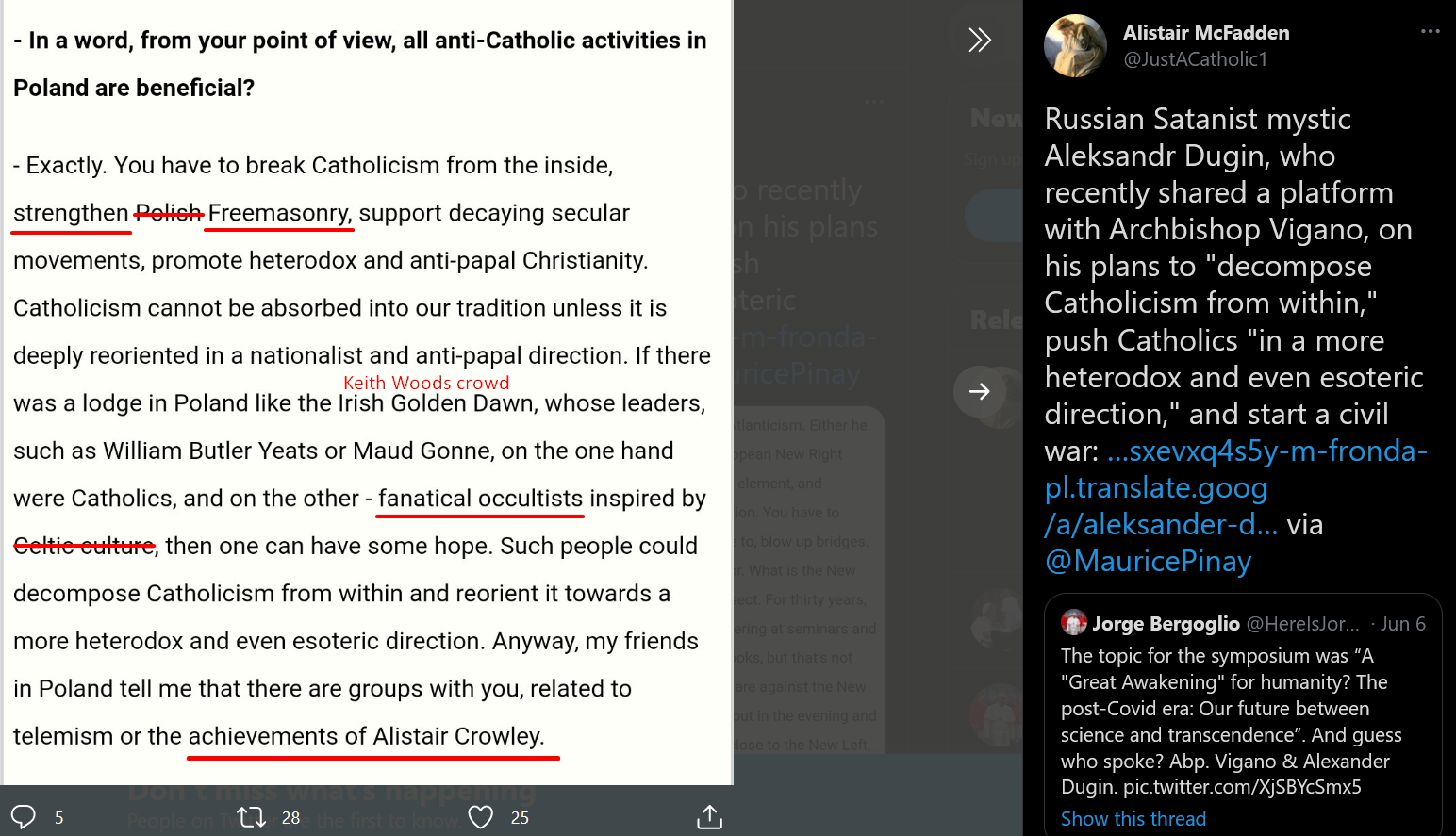 My message I intended to send before I missed the time frame for editing:

If you are not COINTELPRO, you are more likely to be uneducated. I reckon you exaggerate your age to conceal the fact you are still a kid. It therefore makes sense that you have fallen victim to believing in their false dialectic.

Eurasianism cannot resurrect Russian imperialism, multiculturalism has shown time and again that it leads to the demise of nearly each and every civilization throughout history. A nation can survive its wars, but never mongrelization. You need a blood and soil ideology that maintains a racial kinship with the rest of European man in any nation he calls his own (Europe, North America excluding Central America, Oceania excluding Papua New Guinea.

Notice how a blood and soil ideology that rejects both Fractional Reserve Banking and the Gold or Silver Standard. What you need is a Barter System based on your economic productivity, this is Russia as its economy would tank.

It must bare some similarities to National Socialism. No group would be exterminated or displaced, I don’t know about the Jews after all of the harm they caused and continue to orchestrate through their many proxies to this very day. They must be separated from society.

Jews control America, pointing out the obvious somehow amounts to an “inferiority complex” is no different than the absurd charge that validly criticizing Jews amounts to jealousy. No, it never had to do with jealousy, no one who has aversion to Jews is jealous of them.

If they were it would be like feeling jealousy towards Al Capone, this doesn’t make sense. You hate him for entirely different reasons, except you allow yourself to be misled for the Jews’ current scapegoats.

It’s quite obvious they rule America through highly conceited means, as they do Russia and the rest of the world.

Dugin’s association with Nazbol faggots of the Fourth Political Theory (National Bolshevism) which seeks to subvert the true “Third Position”:

He is a promoter of engineered terrorism throughout the “Atlanticist” countries, this goal makes no sense as it is apparent our own governments have already been doing the same for decades.

Your views are essentially no different than his. The only difference is he knows he is spreading the Semitic plague that hangs over the heads of 99% of the world population.

Aleksandr Dugin, Anti-White Globalist: An Introduction to Dugin via his own words (Part 1): https://thuletide.wordpress.com/2020/04/08/aleksandr-dugin-part-1/

This is considered a “Holy Book” of Thelema, 1995. You’re welcome for the English subs.]

Dugin endorsing the Satanic religion of Thelema under the guise of Celtic paganism. This is no different than an Asatru multi-culty appropriation of Óðinnism 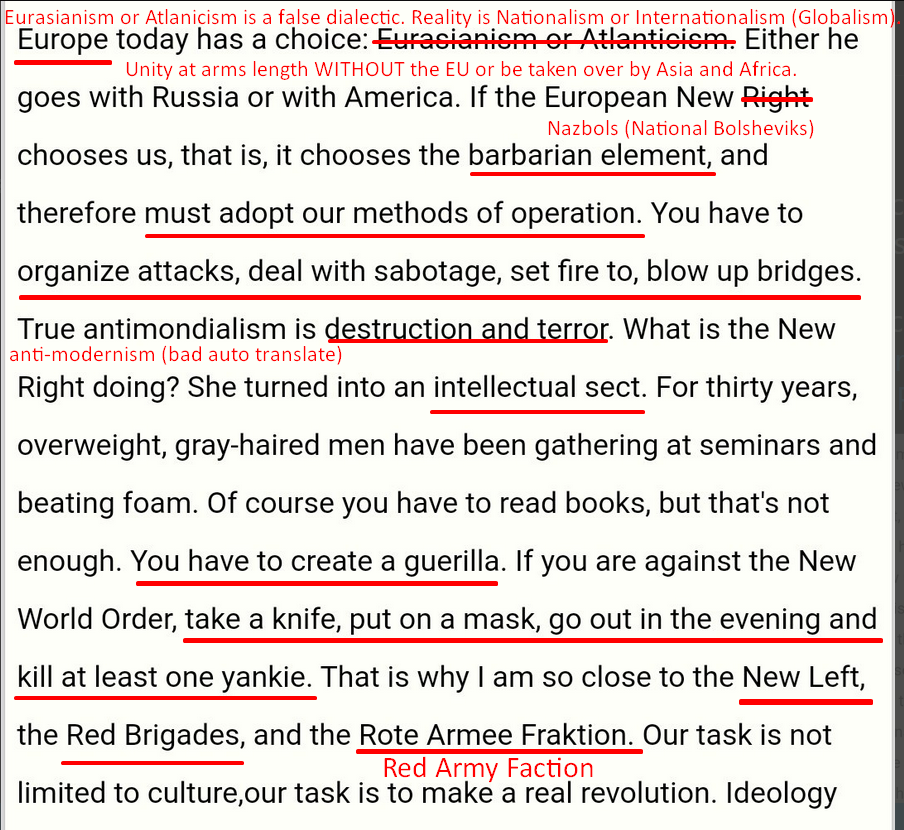 A. Dugin: “Capture of Europe! Attach Europe – this is “Russian-style!”: https://youtu.be/o9gPJPiPvSw

Alexsandr Dugin is a civic ‘nationalist’: https://odysee.com/@wayoftheworld:7/dugin:9
* No different than globalism.

Learn more about the roots of Russian imperialism from Byzantine/Bulgar empires: https://bit.ly/3dffbSo

Imperialism = Creating an empire by exerting political control over foreign territories and peoples, through various means (potentially including colonialism).

Colonialism = Mass migrating into foreign territories and establishing colonies with the aim of displacing or subjugating the native inhabitants and taking their territory and/or resources.