Discordant actions of all parties, involved in the settlement of the Syrian crisis, resulted in the current situation in Palmyra, Russian President Vladimir Putin said. 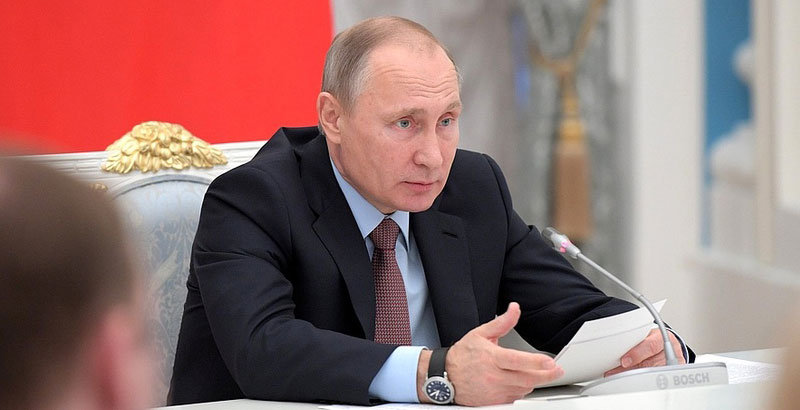 The current situation in Palmyra is the result of discordant actions of all parties, involved in the settlement of the Syrian crisis, Russian President Vladimir Putin said at a press conference in Tokyo after the Russian-Japanese negotiations on Friday.

“Everything that happens in Palmyra is the result of uncoordinated actions between the so-called international coalition, Syrian authorities and Russia,” the Russian President said. “I have said it many times, it is necessary to combine efforts to be effective in the fight against terrorism,” Putin stressed.

He also added that from the military and political standpoint, the liberation of the Syrian city of Aleppo from terrorists is more important than the situation in Palmyra.

“The issue of Palmyra, I think, is purely symbolic. What concerns the military and political value, in this sense, Aleppo, of course, is a much more important topic,” Putin noted.

According to the Russian President, judging by the situation in Aleppo at the moment, “what is happening is exactly what we agreed on, including [the deal] with the President of Turkey during his visit to St. Petersburg.”

“When we agreed that Turkey would provide every assistance in the evacuation of militants who are ready to lay down their weapons in Aleppo, first of all, [we agreed] to save the lives of civilians,” the Russian president added.

Earlier, Syrian President Bashar al-Assad said that the Syrian Army would recapture Palmyra after the liberation of Aleppo.

Yea, pretty much said the same thing after reading the soldiers’ recount of the events that occurred in this incident.

poor cretinPutin doesn’t have a clue.

Aleppo isn’t nearly as important as loss of Palmyra. As far as Aleppo is concerned, “protecting civilians” was the furthest thing from the minds of the Syrians and Russians. Both are guilty of heinous war crimes.

Again, you need to stop making ridiculous statements and inform yourself. The terrorists are holding the civilians hostage and instituting sharia law. And thanks to the U.S. and Europeans criminals elements in government who supply weapons. All for what? Just to topple Assad and build a gas pipeline from Qatar to Europe. Let’s also not forget that Qatar and Saudi Arabia and Turkey are also involved in supplying weapons and jihadis! But you must realize that in order to liberate a city from the terrorists that holds the civilians hostage there is going to be collateral damage and civilians are going to die no matter what.

He may just be a victim of the western press, misinformed and ignorant about the actual situation in the world. Another hate monger.

“Aleppo isn’t nearly as important as loss of Palmyra.” Whoowhee….That’s some strategizing there Jethro. This explains why the only country the USA has been able to defeat without a coalition is Grenada ….. a country with no standing army and a population of 100,000

Have you thought about being a stand up comedian?

Hey, Putin, why don’t you start fighting terrorists for a change. Are you that incompetent?

great idea but I really don’t think an invasion of the USA and a siege of Washington is practical at the moment. It may not be necessary anyway….according to western media Russia has weaponized the president so we’ll revisit this again in 4 years time.

You are ridiculous, don’t you read the news that the Russians are bombing the terrorists?

I don’t know what makes you stupid, but it really works!

This person is a troll, don’t respond, someone block this guy