The ceasefire regime brokered by Turkey and Russia last week in northwestern Hama and southern Idlib last week is not working.

While the Syrian Arab Army (SAA) halted its offensive operations in the area, Hayat Tahrir al-Sham (formerly Jabhat al-Nusra) and Turkish-backed groups continued attacks on SAA positions. The countryside of Kafr Nabudah and nearby points remained the main area of clashes between the sides.

Furthermore, members of the Turkish-backed National Front for Liberation are actively using anti-tank guided missiles in their clashes with the SAA. This indicates that they have a constant source of supplies of such weapons.

Ankara has sent multiple signals that it is not going to abandon or limit support to militant groups in the Idlib zone. Turkey employs its observation posts in the area as a shield defending the radicals from SAA attacks. 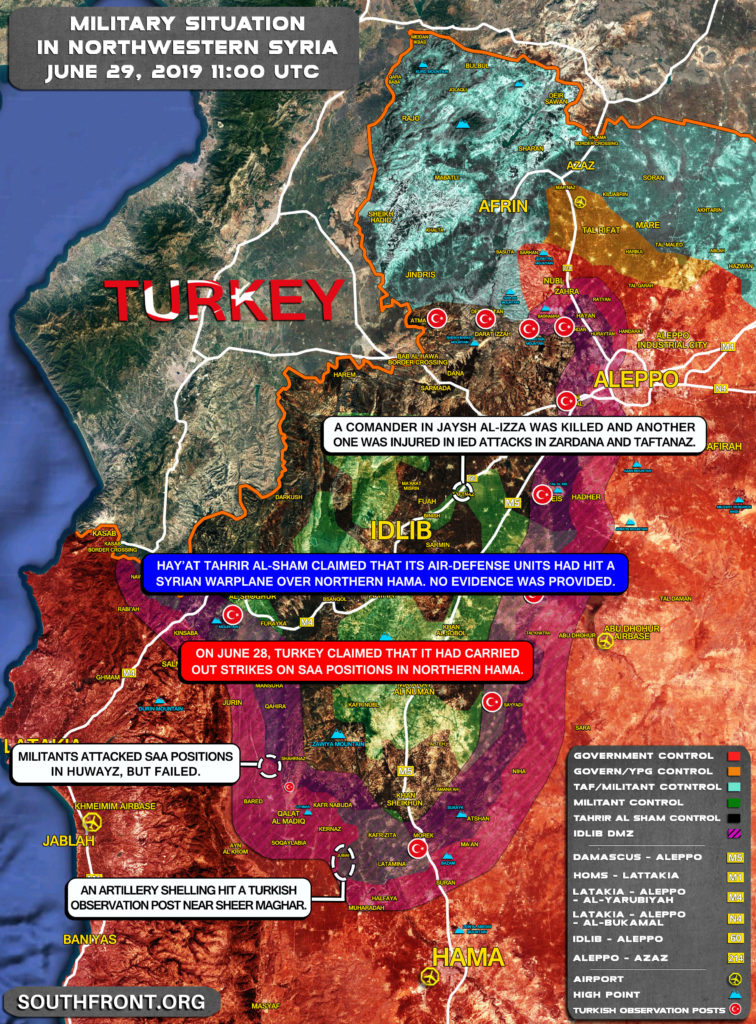 It looks like one of the Turkish observation posts in SW Idlib may have been overrun by the SAA as they’ve moved the front lines forward. And has been abandoned by the Turks. If that’s the case. Then that’s a way to solve the observation post problem.

klove and light
Reply to  RichardD

only i wrote About These obeservation Posts dozens of times as to where and why they were created. ALL obeservation Posts were created on stratetig important sites, most of them on hilltops or mountaintops. The post which is currently beiing discussed here….i wrote About this post 4 x in the last 2 weeks. I wrote how terrorists form AL NUSRA were shelling towns and villages and SAA personal from exactly that Location, no 200 feet apart.I wrote About the openly continusly truckload after truckload(we are Talking dozens) of ammunition and weaponry beiing deliverd by TAF to al nusra.

RUSSIA knows exactly what is going on.Russia is allowing this to happen on a daily Basis. and i wish Folks would stop thinking as in Alice in Wonderland bs stories. Russia follows an Agenda.As does the USA or UK etc…

A one world Government, with Jerusalem as its capital under satanic jewish Leadership.

ALL nations that RECOGNIZE the illegal satanic criminal Entity named Israel are part of the Agenda.This includes USA,uk,russia,china,eu, etc…

and These Evil Forces have only a short period of window to fullfill their Agenda.Jerusalem,israel are the key parts of the Agenda.And time is running out for them.That is the reason why for the average Joe, alot of the moves by exactly above mentioed nations dont make sense if u dont take into account the hidden Agenda.

Where do you get your information from, do you have quotes, links and screen shots?

Militant BS, to paraphrase theresa may, its highly likely that this info you shared is fake.

I dont beleive a thing the rats say.

What a joy. saa attack on our Op first they deserve it

Were they attacking the post or the terrorists using it as a shield to shell the SAA?

The Turks are not Syrians, to speak of civil war and not of invasion is a dirty lie.

It’s just the name of the website. And yes, it’s an invasion and not a civil war.

lol CEASEFIRE… love that word….. there are only 2 possibilities

make your own choice……

A lot of times these ceasefires are to get civilians out of the way.

“The Arabic-language al-Watan newspaper quoted a Syrian Army battlefield source as saying that the Turkish Army on Monday sent terrorists and massive military equipment, including missile-launchers, to Northern Hama concurrent with reinforcing its military positions in Shir al-Magar region.

It noted that over 20 military vehicles, including armored personnel carriers, military equipment and logistical supplies were sent to two Turkey-controlled areas which are dominated by Tahrir al-Sham.

Al-Watan noted that the Turkish military supplies were dispatched via Kafar Lousin crossing, adding that the terrorists use the Ankara-controlled regions in Northern Hama to launch attacks on residential areas and the Syrian Army’s military points.”