The Ukrainian Armed Forces continue to shell the territory of the Donbass. 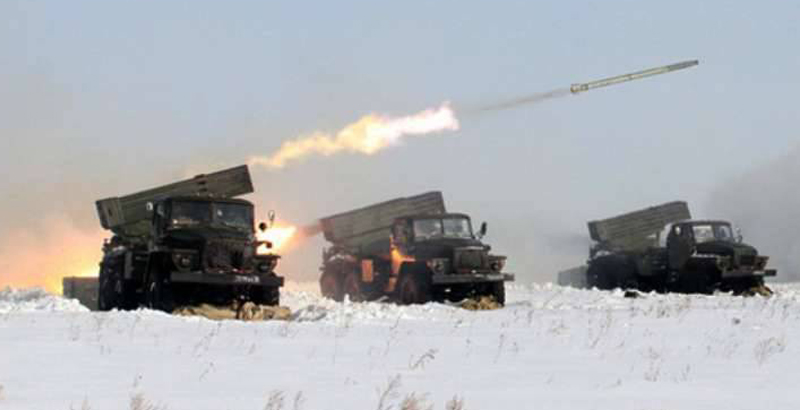 Though, after the last sharp aggravation of the situation along all the confrontation line in the Donbass, some lull occurred there, the situation in the region still remains dangerously explosive. The Ukrainian Armed Forces continue to shell civilian facilities and residential areas of Donetsk city – 1,000 shells per day are some kind of ‘norm’, to which no one already pays attention.

On Wednesday, a protest against a strange position of the Organization for Security and Co-operation in Europe (OSCE) in relation to the shelling of the city by Ukrainian troops was held by local residents in front of a hotel, where the OSCE office is situated. According to locals, the OSCE either does not record the most of shelling or prefers to focus on some of the most understandable for it parts of the front. Photographs from Avdeyevka, showing members of the Special Monitoring Mission (SMM) of the OSCE, standing against the background of Ukrainian tanks, became another reason for dissatisfaction of Donetsk residents with the OSCE work. The protest ended peacefully.

A day before, one of the mission’s groups could not get to an object due to fire of an Ukrainian sniper in Trudovskoy village. According to head of the Donetsk Office Olga Skripovskaya, representatives of the Donetsk People’s Republic (DPR) did not allow the group to pass a checkpoint, explaining this with the fact that the sniper was operating in the area.

In military terms, the most difficult situation occurred on the Mariupol’s flank at these days. The 36th Marine Brigade of the Ukrainian Armed Forces received reinforcements. In addition, the Azov battalion and units of the National Guard also moved to the front line. As a result, Ukrainian troops once again attempted to storm the Derzkaya height in the direction of Kominternovo village. Last week, a reconnaissance group of the Ukrainian Armed Forces was undermined on a trip wire in this area.

At the same time, the Ukrainian Army continues to shell critically important infrastructure and hazardous production facilities in the Donbass, using heavy artillery. On Wednesday, the Donetsk filtration station was shelled once again. On Tuesday, there was an explosion at the Donetsk state factory of chemical products due to shelling of the Ukrainian Armed Forces.

Meanwhile, since the evening of February 15, the Ukrainian Army has fired about 600 rocket, artillery and tank shells, as well as 10 mines, on the front-line areas of the DPR. According to a representative of the DPR’s power-wielding agencies, Ukrainian troops used the Grad multiple rocket launcher system, 122-mm and 152-mm artillery, tank guns, as well as 82-mm and 120-mm mines, targeting surroundings of the Volvo-Center, the territory of the Donetsk airport, outskirts of Yasinovataya, and the villages of Spartak, Zhabichevo, Krutaya Balka, Yakovlevka, Vasilevka in the area of Yasinovataya, as well as the villages of Sahanka and Leninskoye in the area of Novoazovskiy.

According to the DPR Operational Command, on February 14, the Ukrainian side violated the ceasefire 550 times. During this time, the Ukrainian Army 68 times used heavy artillery. In particular, mortars of various calibers were used 163 times, infantry fighting vehicles – 39 times, anti-aircraft guns, grenade launchers and small arms – 280 times.

Meanwhile, the Ukrainian Army continues to dispatch its troops to the front line. However, new units, in particular artillery and armored units, have no experience and do not know the terrain, and sometimes it leads to serious problems. For example, recently, a reinforcement of the 76th Brigade was shelled by artillery of the 25th brigade, which has been deployed in this area already for a long time. As a result, five Ukrainian servicemen were killed.

At the same time, the Ukrainian Armed Forces experience a lack of specialists and equipment. A tank squadron, which was dispatched to Avdeyevka, is practically the only operating source of the front line. There is no new military hardware, and usage of the remnants of the Soviet legacy cannot satisfy the needs of the Ukrainian Army more.

What I find interesting is the fact that those in Ukraine, that came from the Galicia side, seriously looked down on the Russian ethnic areas of Ukraine. Weren’t team Galicia basically made up of academics and not manual workers in the key Ukraine industries? Funny, how those miners and farmers seriously show up the non-manual, non-industrial workers, who thrive on academia and call centre work? There again, if I was to have a domestic problem, that needs sorting, do I call for an academic of a skilled labourer to fix the fault?