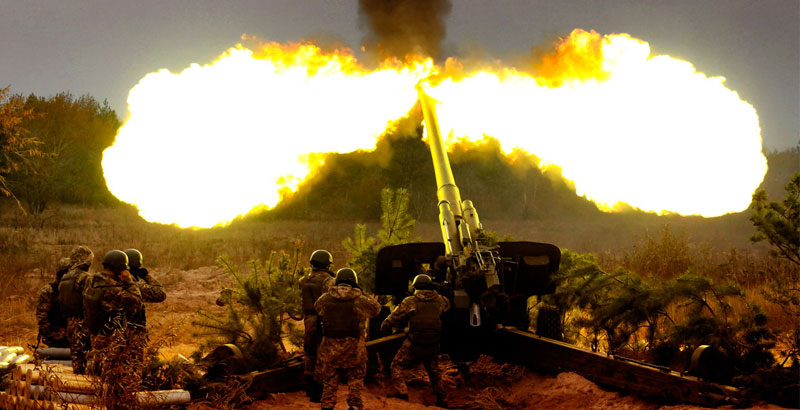 During this week, the military situation in the Donetsk People’s Republic (DPR) and the Luhansk People’s Republic (LPR) has once again worsened. According to witnesses and official reports of the DPR Defense Ministry, the number of shelling from the Ukrainian side has significantly increased.

So, as deputy commander of the DPR Operational Command, Eduard Basurin, said at a briefing on December 14, for the past day, the Ukrainian Army violated the ceasefire 864 times, firing on the DPR territory 288 mortar projectiles of 120-mm and 82-mm calibers and 311 ammunitions from grenade launchers. Infantry combat vehicles and light weapons also were used during the attacks. However, the usage of 152-mm artillery was spotted only four times in the area of Yasinovataya that is connected with the visit to the republic of deputy head of the special OSCE monitoring mission in Ukraine, Alexander Hug.

But, in previous days, heavy artillery of the Ukrainian Armed Forces did not stop to operate. On the night of December 8, Ukrainian troops carried out a powerful artillery strike, using 122-mm artillery, on Kuibyshev district of Donetsk. As a result, 13 residential houses were damaged and two civilians were injured. On December 11, Sahanka village, located on Mariupol direction, came under powerful fire of the Ukrainian Army. Ukrainian missiles hit the building of the local school. Fortunately, it was a weekend, and there was not anybody in the school. The shelling of the village was continued the next day.

The main flash points in the DPR are Zaytsevo village in the northern outskirts of Gorlovka, the area of Krasnyy Partizan, the Yasinovataya checkpoint and Avdeevka industrial zone, the area of the Donetsk airport Spartak village, the western part of Donetsk – the area of Staromykhailivka and Trudovskoy village, the area of Dokuchaevsk, as well as the southern direction – the settlements of Sahanka, Leninskoe, Kominternovo.

On December 14, another unprecedented and blatant war crime was committed by the Ukrainian Army in the area of the Mayorsk checkpoint, located near the contact line near Gorlovka. Ukrainian soldiers opened machine gun’s fire on passengers of a bus, moving to the direction of occupied Artiomovsk. As a result, two civilians were killed, while two others were wounded. As it should be expected, the Ukrainian side accused DPR fighters, despite the fact that the shooting took place at the checkpoint, controlled by the Ukrainian Armed Forces. At the same time, as the operational command of the republic noted, immediately after the incident, Ukrainian fighters opened mortar fire on positions of Donbass defenders, provoking them to response.

Well, I am not surprised. This is typical US modus operandi.

The US have lost Aleppo. So up the ante in Ukraine? Is this what the EU meant when they said Russian sanctions would remain in force, until Minsk II is implemented? What part of the agreement mentions Russia? Is NATO losing the black market and so giving Porkie a lending hand?

I hope that the OSCE is at least recording this, I have meant to dive into the OSCE reporting methodology … Daily and spot reports from the “Special Monitoring Mission to Ukraine | OSCE” http://www.osce.org/ukraine-smm/reports

The little I read was pretty dry reading. On the surface, I did not think it was biased. They simply recorded incidents. The interpretations in western Media were outlandish.

The coward Ukro Nazi know they go into the Donbass …they get Cauldron and Decimated.

So they Arty /Missile from distance ……On the innocent citizens The Donbass. Ukraine /Kiev is near economic ruin collapse…just a little push and Poroshenko swing from The Street light like El Duce!

Putin knows the fish is rotting. ..it’s the Russian Oligarchs which need to change the Ukraine By network with Ukraine Oligarchs…

Sort of…..Business be better we cut ties… The Nato.

Trump may enable this if He gets past Dec 19th…and then flush the Neocons in DC.

Soon will Ukraina colapse under its own weight. Poroshenko has probably already transfered his fortune somewhere in the west.