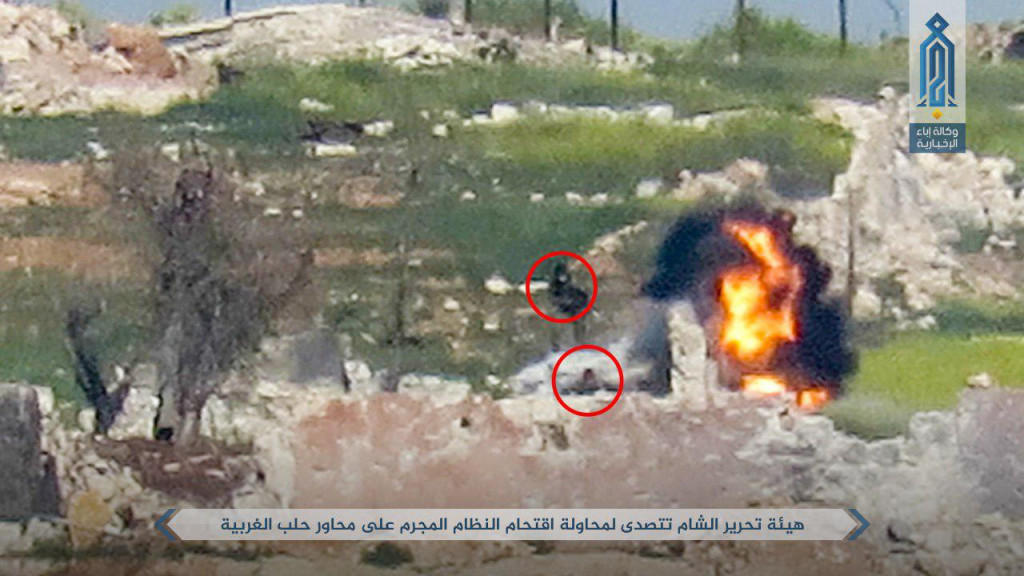 On the other hand, the SAA (Syrian Arab Army) announced downing of two HTS drones and a number of killing and injuring terrorists in Andana during SAA shelling a building fortified by HTS.

The Russian and Syrian Air Forces continue to target Ahrar al-Sham and HTS positions in areas of Anadan, Hayyan, and Hreitan.

Both rebel and government sources are increasingly talking about masses of government troops mobilizing in Aleppo’s western countryside prior to a massive anticipated offensive. Though the ongoing Kafraya-Zabadani agreement makes us believe that an extensive offensive in west Aleppo will not happen in the nearest future.

HTS had lost their manpower to make destructive gains against the SAA and allies. Even the proaganda “win” in Khan Sheikhoun was not enough to make up the fact that many militants ran to join Euphrates Shield, and many more have died in battle.

Turks send them back to Hama though.

I do not share your optimism regarding the Islamist loss of manpower. On the contrary, I think they have an endless supply of brainwashed, useful idiots, with no educations other then being able to read the toxic Koran, that are willing to fight for Allah and for $ 400-$ 500 and the change to rape some enslaved women. No matter how many of them Russian/Hezbollah/SAA will destroy, they will be replenished by thousands others eager to meet Alhah and the ” 72 virgins). As long as SA/Qatar/US/Turkey/Israel will finance them, they will find more than enough power to overwhelm SAA through sheer numbers. Renumber there are far more Sunnis around the globe than Shiias or Christians, and the former are also a lot more fanatical/suicidal than the latter.

Maybe the calm before the storm. This could be a distraction by SAA to tie up HTS manpower (opposite ends of the front). IMOA: I hope to see SAA make a drive on Morek in N Hama (to cut off the main supply route and maybe create a Jihadist kettle).

yes that would be grand

I rather think that the Syrian army and its allies have something new up their sleeves and that the recent fighting had been intended to draw in the US head-chopping, heart-eating rapers’ reserves. Prepare for a colossal crack.

Dislodging Islamist from northern Hama and having them move equipment and personnel in large numbers on open terrain will make tempting targets for Russia air force even at night time. That may be the actual ploy ( to attract them in the open and destroy large numbers of them) rater than making meaningful terrain gains in western Aleppo. The SAA army can recapture villages but they do not have the man power to hold them and most of the local population in northern Idlib province is of Sunni/Turkic background, deeply hostile to Shiias/Allawites and SA. Unless the Russian decide to bomb the entire population into oblivion, I do not think they can capture and hold Idlib. At best they can hope for a mutual non aggression agreement with the local Sunni terrorist; But that is very unlike as they latter will be pressured by their outside supporters to keep attacking SAA and Russian forces. There will not end to the conflict in that part of Syria until Russia and Turkey will have a show down of some sort which will decide who the winner is.

Russian Caldron strategy is evident; draw the enemy into a known territory and then destroy them at leisure, but the SAA has to be careful not to deploy into similar traps as the enemy has learned this.

West Aleppo countryside and Idlib are Not priorities for SAA. At this point SAA needs to expand towards Isis. If they fail to do so, rebels and their western allies will do the job and the sit on the bargain table , with strong cards. So, after hama , I expect to see them continuing palmyra and deir Er Zor cambaign and moving toward tacba