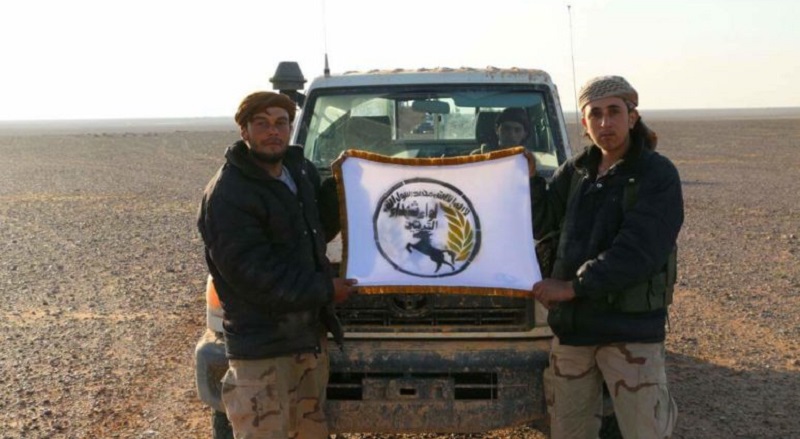 The Shuhada al-Qaryatayn Brigade announced in an official statement on July 24 that it has cut off its relationship with the US-led coalition due to “pressure from the US-led coalition to stop the fighting against the Syrian Arab Army (SAA)” in the desert including the countrysides of Suweida, Damascus and Homs. The Shuhada al-Qaryatayn Brigade stressed in the statement that it will continue to fight the SAA on all fronts. 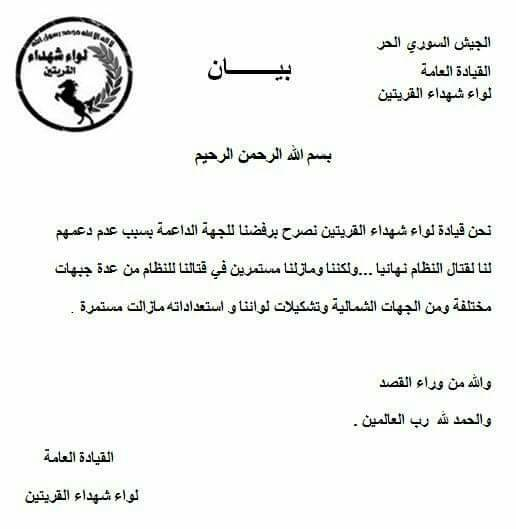 According to a commander of the Shuhada al-Qaryatayn Brigade, the US-led coalition warned the group not to attack the SAA after they had attacked one of the SAA positions in the Ghorab mountain area in the Damascus desert.

The Shuhada al-Qaryatayn Brigade is one of the largest groups supported by the US-led coalition, which is based in the At Tanf base.

Moussa
Reply to  Kids in Africa

I just said a loud ‘oooooh!’ after I saw that picture.

Kell
Reply to  Kids in Africa

Who will be paying these warlords now OR will the CIA still covertly fund them with drug profits as they have done with other terror groups in past decades ?

Once they out from under US Protection, the Syrian and Russian air forces will hunt them down and destroy any camps they set up.

Cant see the CIA pulling its fingers out of all these pies,it will still want some influence in different camps,also whats to stop mossad taking over the reigns where the US can then say its not them doing the supplying.

Hard to believe that the US will not be financing or arming any group there. Or else they will have Saudi Arabia or Israel doing it. Countries’ official statements don’t mean anything. The deep state has agents all over world who can shift money and weapons anywhere in the world. It seems that many of the terrorists’ weapons were sent from Bulgaria.

If they are not backed by the US Military, they can be destroyed on the ground without starting a war between the US and Syria. It doesn’t matter what the CIA wants to do covertly. They cannot stop the Syrian and Russian planes bombing them.

Funding has been pulled and the “FSA” has been left to its demise… Assumeing that funding from qatar/saudi/israel is also pulled: It’s OVER…

It’s true what the guys say, CIA funding doesn’t count. Neither does Gulf money. They have been dropped in it and will be bombed accordingly if they continue their private “war”.

The US Knows that if any attacks on the Syrian army take place from Al Tanf, the Syrians with Russia will flatten it.

The Americans are in Syria Illegally and the Syrian Military has every right to destroy their outposts Killing everyone in them.

The US soldiers have rejected their oath of joining by not disobeying Illegal Orders to go into Syria illegally. That makes them Illegal Combatants. No more than Paid Mercenaries.

For northamericans what is count is $$$ whether or not the action is legal.

There used to be a universal rule regarding mercenaries, get captured and you get executed on the spot. Same should apply in Syria towards all fighting against Syria, no exceptions.

I suggest that Syria and Russia set up a Gitmo kind of prison where all Illegal Combatants can be held. . . For as long as Syria wants to hold them. . .

I will ponts out that the US troops in Syria are Combatants.

Also, the US Troops are in Syria Illegally.

Good idea … Syria can hold them for as long as it takes for the US to drop the sanctions on Russia!

Gitmo would be unworkable in Syria and its value questionable. Firstly the Americans have received tons of flak because of gitmo – they are only able to sustain it because they dominate the world media. The media would rip Syria to shreds (I can imagine if they held 100 prisoners the elite controlled media would say that they already murdered 900 and stuff like that, it would be relentless). Secondly it would be morally bankrupt from day one. It is a criminal way to treat prisoners and all guards at gitmo are accomplices to torture i.e. international criminals. Thirdly if the location was known (and it would be) the US allies might simply bomb it to smithereens and then blame it on Syrian “terrorist government” – problem solved. For these reasons, and others, I predict that Syria continues to sell their western/israeli pows back to their countries for a good price. They are cash poor so it makes sense, and they don’t have to look after their welfare for years. US simply prints the money and looks the other way.

Brit Marines did so with a couple of captured Americans mercs in the Falklands, US complained and Thatcher told them to go fk themselves.

This is BULLSHIT! The US never wanted this area to be a de-conflicted zone! This groups refusal of US orders is just a smokescreen to try to slow down the SAA progress! Who is paying their wages? (keep in mind its southern Syria) well…… Israel of course! The same Israel that gives these militants hospital care! RATS, the whole lot of em! And for those fuck heads who say “Anti-semitism, bla, bla, bla”…… SHUT YOUR FOOKIN MOUTH! Israel literally bombs the SAA! Israel literally takes in al-nusra and ISIS militants into their hospitals! Therefore SIT DOWN AND SHUT YOUR FOOKIN MOUTH!

All starting to fall apart in a big way now…

Reality of this rebel group are Isis but pretended to be rebel for get weapon support from the west and was already known by CIA but CIA and the west still sended weapon to support them.

The fact these groups backed by the US and are formerly ISIS speaks volumes and if this becomes known in the media, it will have an adverse affect current backing of groups. The US may have their backing of groups questioned as to whether they have properly vetted them or backing more terrorists.

This is politically interesting, expect a move in this area soon perhaps even by Israel.