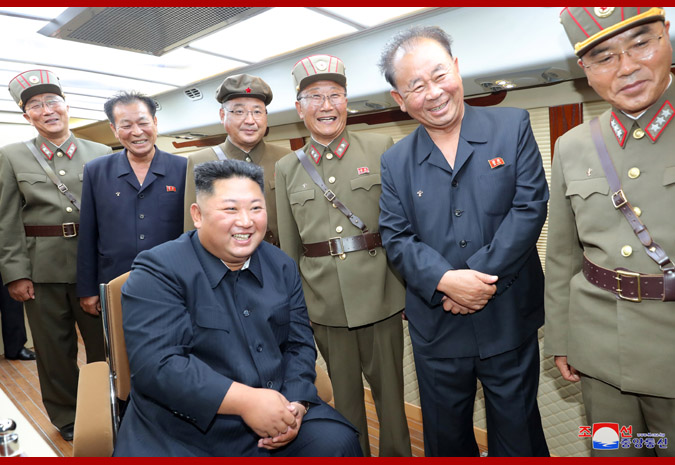 The statement of the test on August 7th, said the following:

“Two tactical guided missiles launched at the operational airfield in the western area of the country flied across the sky over the capital area and the central inland region of the country to precisely hit the targeted islet in the East Sea of Korea.

The test was aimed as an “adequate warning” to the joint military exercises of the US and South Korea, which the North has repeatedly antagonized in the last few months. 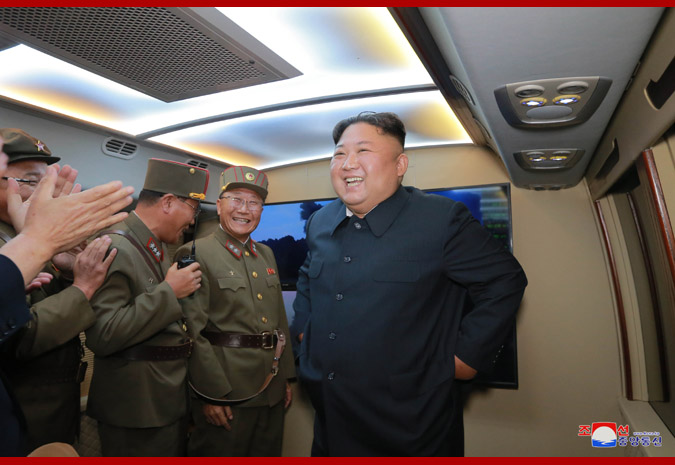 On August 10th, the weapon was developed to “suit the terrain condition of our country and as required by the Juche-oriented war methods has advantageous tactical character different to the existing weapon systems.”

Both weapon tests were successful, according to the reports. And, despite not being mentioned specifically, it is clearly also a warning towards the US-South Korea military exercise.

On August 11th, Kwon Jong Gun, Director-General of the Department of American Affairs, Ministry of Foreign Affairs of the Democratic People’s Republic of Korea issued a statement. 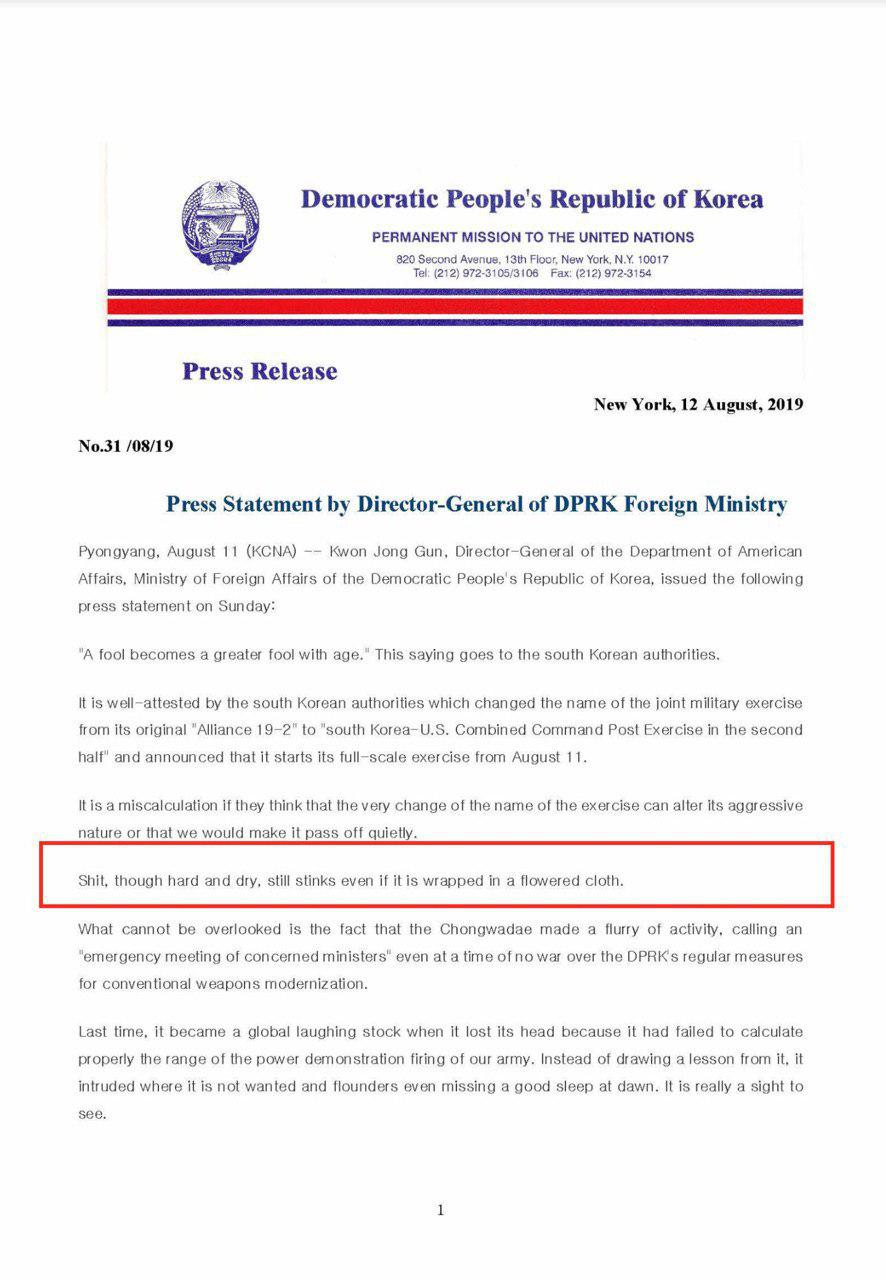 In it, the North said that “’A fool becomes a greater fool with age.’ This saying goes to the south Korean authorities.”

The statement was aimed at South Korea’s alleged attempts to “hide” the true nature of the US-South Korea military drills by simply changing its name.

“It is well-attested by the south Korean authorities which changed the name of the joint military exercise from its original “Alliance 19-2” to “south Korea-U.S. Combined Command Post Exercise in the second half” and announced that it starts its full-scale exercise from August 11.

It is a miscalculation if they think that the very change of the name of the exercise can alter its aggressive nature or that we would make it pass off quietly.”

The North was having none of it:

“Shit, though hard and dry, still stinks even if it is wrapped in a flowered cloth.”

The statement was released by the North Korean Permanent Representative to the United Nations.

Once again, the South said that the “upcoming” negotiations would be between North Korea and the US and the South played no part in them.

“Though we are to enter into a dialogue in future as the currents flow in favor of dialogue, they had better keep in mind that this dialogue would be held strictly between the DPRK and the U.S., not between the north and the south.”

The weapon tests were defended, as even US President Donald Trump had said that “a small missile test” was normal for any country.

“Even the U.S. president made a remark which in effect recognizes the self-defensive rights of a sovereign state, saying that it is a small missile test which a lot of countries do,” Kwon said.

Another issue in the South-North negotiations is that the military exercise puts Pyongyang in the enemy position, and that itself endangers any future progress in relations.

We will certainly settle this on all accounts and closely watch the act of the south Korean authorities.

If the south Korean authorities let loose a blast to save face even a little by standing such a funny fellow like Jong Kyong Du again, it would be a foolish act of putting out the fire by oil.

It already went wrong for Chongwadae to have a sound sleep at daybreak as it notoriously keeps security in good orders.”

Despite the warnings and as expected, Seoul and Washington went forward with the exercise.

With the August 13th statement by the North Korean Foreign Ministry the drills were condemned.

“This is an outright challenge to the sincere efforts of the DPRK to put an end to war on the Korean peninsula and turn it into the peaceful home of the nation,” Minju Joson said.

In Pyongyang’s view these actions by the South showed that Seoul has no will to resolve the Korean Peninsula situation.

“This shows that the south Korean authorities have no will to prevent the situation on the Korean peninsula from being exacerbated, but seek only confrontation with the fellow countrymen, preoccupied to harm the DPRK.”

The North expressed its opinion that the South is “hell-bent on hurting the DPRK with much interest in war and confrontation rather than peace and dialogue.”

The statement ends with the following:

“The south Korean military warmongers will certainly pay dear price for bringing the hard-won phase for peace and dialogue to catastrophe.”

Thus, the North deems this military drill as a very serious offense that could potentially set the Korean Peninsula situation back years.

Meanwhile, US President Donald Trump, on August 10th praised a letter he had received from Kim Jong Un. It said that it contained a lot of complaining about the “ridiculous and expensive exercises,” but also a “small apology for the short-range missiles.”

….also a small apology for testing the short range missiles, and that this testing would stop when the exercises end. I look forward to seeing Kim Jong Un in the not too distant future! A nuclear free North Korea will lead to one of the most successful countries in the world!

Essentially, Pyongyang has lauded Trump and his personal ties with Kim while chastising South Korea as a “puppet” regime following the orders of its master, the United States.

South only looking for more trouble just after having trade affair with Japs.

Keep up the pressure, KJU.

What for? What if a lunatic from one side or another will decide to open fire at his “enemy”? Are you sure want to risk the lives of millions of innocent people just to show Americans they are morons?

Just a flash, to put them back in their box. Think how traumatised the pilots would be and think is it worth sacrificing their lives, for the globalists.

At my point, the price of try is too high for the entire humanity.