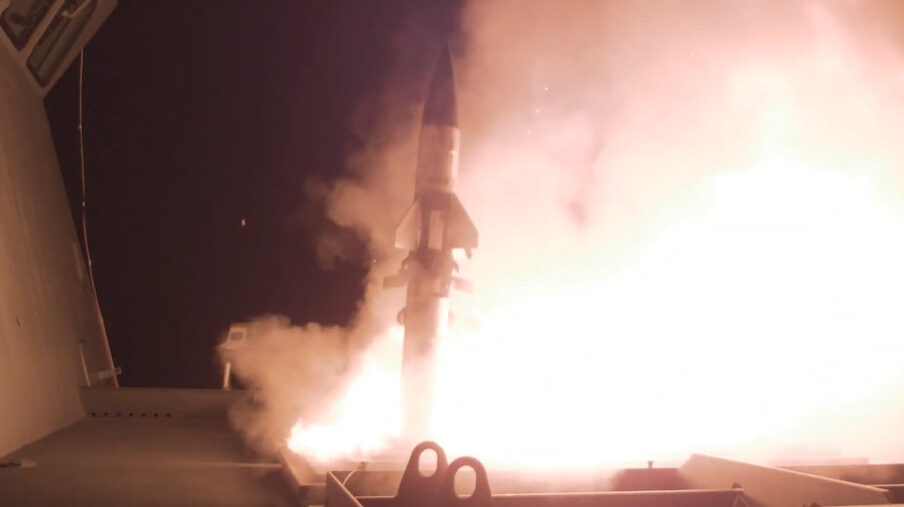 The ship mounted version of the Iron Dome air-defense system, dubbed C-Dome, has officially entered service with the Israeli Navy.

In a joint statement released on November 17, the Israeli Ministry of Defense and Navy said that the system entered service after a successful test last month aboard the Sa’ar 6-class corvette INS Oz, simulating threats the system is likely to face at sea. The test was conducted off the coast of central Israel, with representatives from the navy and Rafael Advanced Defense Systems taking part.

“The test simulated real threats and included the system’s successful detection and interception of targets in challenging scenarios,” the ministry said, adding that the test represented a “significant milestone in enhancing the capabilities of the corvettes” and marked “the final stage of the naval interception system’s operationalization.”

The C-Dome system can be seen intercepting a missile launched from another ship during the test in a video that was released by the ministry.

“C-Dome, the naval configuration of the Iron Dome, promotes further operational flexibility and has become a part of the State of Israel’s multi-tiered missile and air defense array,” the minister added.

Each Sa’ar 6-class corvette is equipped with 40 vertical launch cells for C-Dome interceptors. The corvettes will guard Israel’s strategic infrastructure, like the natural gas rigs, and protect the commercial shipping lanes which bring in 98% of the country’s imports.

The C-Dome adds another layer of Israel’s air defense network that has four operational defense systems: Iron Dome, David’s Sling, Arrow 2, and Arrow 3. The network was built to stop all aerial threats from Israel’s foes, including rockets, drones and ballistic missiles.
MORE ON THIS TOPIC:

Fish will have Kosher food on artificial reef when leaky ship made with cheap parts and weighed down by too many missiles is hit by storm.

A practice target for Iran, Hesbolagh, Ansaralla Yemen. The iron pass was neutralised by fire craquers from Hamas. Antiship missil will serve canned food to the lobsters, blub blub blub…..

The Zionists dead ass said none of “their” air defense systems works against Russian/Iranian missiles and drones.

They changed their story to, that their air defense system wouldn’t cover much of Ukraine (they mainly talking about Plastic Dome). Kyiv said we can still use it in main cities therefore it should cover it, Zionists said no (it would be a risk for them).

Zionists troops were in Ukraine fighting Russia, and most of them did piss themselves and ran away. Zionists do support their goy in Ukraine and send aid to Ukraine, they are BS-ing when they say they have a neutral stance (they send active duty soldiers, military aid, intel, and work with the EU to get Wahhabis to fight for Ukraine). That Zionists’ neutral stance means.

BTW, if Zionists were to send “their” air defense systems it would be the first time they use them in real active military operations. Also, it is still called Russia SMO – so really a limited military operation.

The funniest shit, how many countries now want to buy Iranian drones now? Compare that to Zionists’ Plastic Dome. The Zionists fully know if they send their Plastic Dome it would be destroyed and there goes their PR BS, now if Iranian drones destroy those they would kill themselves.

Zionists wouldn’t able to recover after that.

Iranian drones built from parts made in the USA