On September 30, a convoy transporting equipment for the U.S.-led coalition in the central Iraqi province of Babylon came under attack.

In an official statement, the Iraqi Security Media Cell said that an improvised explosive device (IED) had struck the convoy, when it was moving between the bridges 15 and 16 in Hillah to the south of the Iraqi capital, Baghdad.

The Iraqi Security Media Cell claimed that the Iraqis from a local transport company were driving the convoy’s trucks. None of them were injured. 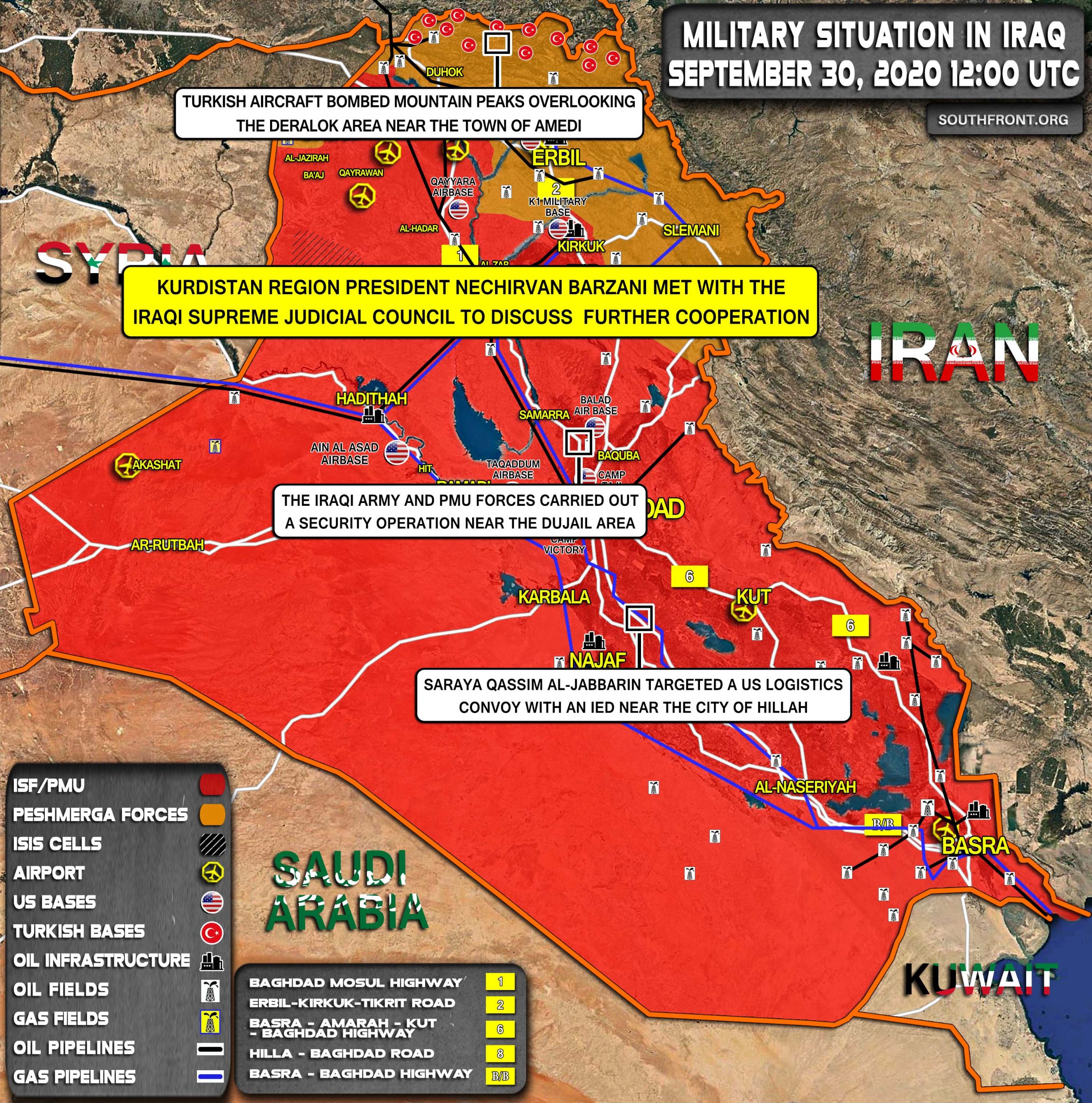 While the Iraqi Security Cell didn’t report any losses, the Sabereen News, a Telegram Channel that’s known to be close to Shiite armed groups, claimed that the entire convoy was damaged as a resale of the attack.

According to Sabereen News, the newly-founded Saryat Qasim al-Jabbarin, a pro-Iranian group, claimed responsibility for the attack.

Saryat Qasim al-Jabbarin is one of Shiite armed groups that vowed to expel U.S. forces from Iraq in response to the assassination of Quds Force Commander, Qassim Soleimani, and Abu Mahdi al-Muhandis, Deputy-Commander of the Popular Mobilization Units, earlier this year.

These small attacks are just bait, meant to lure the US into strike Iraq and have their bases destroyed instantly and expelled from the country, sooner or later there will be an American casualty and it will be on

The Objective
Reply to  Kenny Jones ™

These attacks are not bait. If they are a bait, then some soldiers should have died by now. These are cowardly attacks for propaganda reasons. they won’t do anything that’ll provoke a U.S military response. Trump’s red lines are clear after Jan. 3rd, 2020.

Magnus Dracus
Reply to  The Objective

sooo funny…since DoD posted that “if the attacks continues they will retreat” lol..good red line :)

The Objective
Reply to  Magnus Dracus

Browse the net for what analysts are saying about this latest U.S. threat to pull out “Diplomatic” workers. It’s an implicit threat of war.

What can the Americans do that has not been done before?

Iraqi Shia will continue to resist until the end of time itself.

That much is obvious.

Kenny Jones ™
Reply to  The Objective

The Objective
Reply to  Kenny Jones ™

You know they aren’t gonna leave no matter how much you threaten them. So save yourself the embarrassment of threats and just launch one of those precision-guided munitions at U.S forces in Iraq – if you dare.

I already told you righteous brother, don’t let be dragged into discussion with this ‘I’m not Wahhabi’ punk. Actually he is.

Well you and trump can shove his red lines up his arse.

Tell that to your fallen heroes.

What they are is the tip of the iceberg. the continuous abuse of the country and its people by the US its nato poodle will mean sometime they are going to face an enemy who are more determined than they ever were under Saddam.

That was on Soleimani’s birthday, a test of what the response would be, the Iraqi resistance possesses air defense missiles to counter American airstrikes

If I may ask when was this?

Now, that is long ago. We need something new. What do you say? Btw, thanks.

Thats what they should expect more of.

Well done Iraqi Resistance! Keep it going on until the filthy Genocidal War-Criminal/Terrorist AmeriCunt Scum leave Iraq + Syria for good and crawl back into their rotten shithole so-called country AKA DumbFuckistan.

it will get to the point where the yankee-twats can’t leave their bases or cities without being attacked, just like in afghanistan, and the only remaining movement between the bases will be by air or heavily armed convoys to deter the iraqis from attacking, whichever means used, it will be a costly and heavy on the moral so sooner rather than later they will retreat back home, to illiteracy obesity and an abundance of drugs and privatized prisons and no healthcare. poor fuckers – guess they would prefer to stay in whatever bum-fuck shithole the morons in the white house and pentagon have placed them in, whatever shithole far better than at home.

“According to Sabereen News, the newly-founded Saryat Qasim al-Jabbarin, a pro-Iranian group, claimed responsibility for the attack.”

Again, as I predicted a year ago, hundreds of these new movements will emerge, both in Syria and Iraq.

They are Iraqi and Syrian government backed, as evidenced by the fact that they don’t go for US casualties but rather act to threaten and warn.