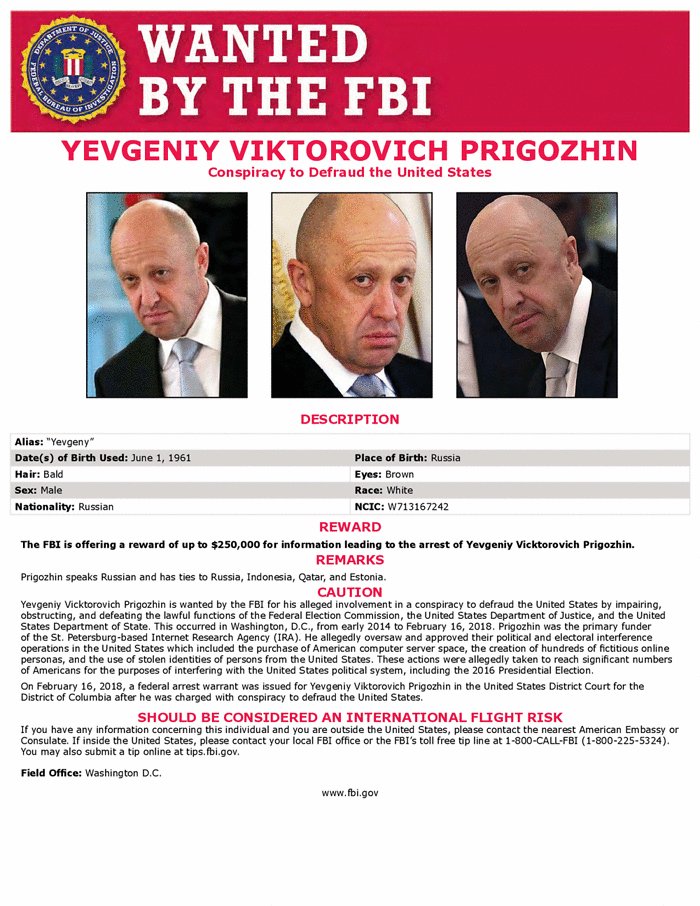 On February 26, the FBI added Yevgeny Prigozhin (often linked with the Kremlin and so-called ‘Wagner group’ by MSM) to its wanted list with a reward of up to $250,000 for information leading to his arrest.

In the best traditions of the modern neo-liberal/globalist Washington regime, the FBI accuses Prigozhin of “conspiracy to defraud the United States” (in 2016 for sure). Expectedly the 2020 election, with was accompanied by multiple documented vote fraud cases in the interests of Biden, caused no concern in the FBI.

On February 16, 2018, a federal arrest warrant was issued for Yevgeniy Viktorovich Prigozhin in the United States District Court for the District of Columbia after he was charged with conspiracy to defraud the United States,” the FBI statement reads.

In own turn, Prigozhin said the FBI was using him as a scapegoat for the United States’ internal crises by seeking his arrest.

“American society is under an overwhelming burden of problems: oligarchs and politicians are plundering the budget. A horror story is needed to cover the colossal gap between the deep state and the people,” Prigozhin wrote on his Telegram channel.

“The Russian threat is the main idea of Operation Witch Hunt, which is taking place throughout the United States.”

Meanwhile, the FBI appeared to be not only happy participant in the ongoing Big Neo-Liberal Witch Hunt, but also too eager to really pay the proposed $250,000 reward for the requested info.

Following the FBI reward promise, the press service of Prigozhin’s Concord Company released a public statement providing the requested info and asking the FBI to pay the promised reward.

“According to the information available on the FBI’s official website, a reward of up to $250,000 is offered for information that will lead to the arrest of Yevgeny Viktorovich Prigozhin. The FBI is looking for Evgeny Viktorovich for alleged interference in the internal affairs of the United States.

The press service of the Concord company is ready to share reliable information and satisfy the curiosity of representatives of foreign special services. Evgeny Viktorovich Prigozhin can be found at the following address: St. Petersburg, Lieutenant Schmidt Embankment, Building 7. Please pay us $250,000 for the information provided.

As of now, there has been no information that the FBI has sent a cent to Concord.

Moral of the story,never dog for dogturds,not only that,they would rather kill you then cough up!

When the Yankeestan accuses Russia of doing something, it is an admission that the Yankeestan is already doing it, it is psychological projection, and a sense of guilt that pushes bigots to want to make crime public, but in a purely bourgeois way also hide one’s responsibility, which will be cleaned up in the confessional, so as to be ready for the next crimes to be blamed on others.

Crumbling pedobide Empire is getting more desperate by the day…

I’d like to see the FSB offer a reward for rounding up Neocon and Neoliberal warmongers.

LGBTQFBI just makes things up out of thin air. And they are not even intelligent or creative about how they do it. No wonder they are so easily mocked and spiraling into irrelevance.

There is ever increasing totalitarian “snitch culture” evolving and being promoted in the US by its ruling class. The elites are so insecure, paranoid and fearful of their own position that they are now trying to turn citizens against each other. It won’t be much longer before it is all out of control.