On August 18, local councils of several towns in the southern Idlib countryside released an official statement, in which they called on Turkey to place their areas under its direct mandate in order to prevent an attack of the Syrian Arab Army (SAA) and its allies. Furthermore, the councils promised Turkey that they will facilitate its rule.

“We call upon the Turkish government to intervene immediately and expeditiously to implement the Turkish mandate and we promise that we will assist the Turkish brothers in administrating the region, we also call upon them to activate and revitalize educational, services, health and other institutions in the liberated areas,” the statement reads. Most of these local councils are affiliated with the Turkish-backed Nation Front for Liberation (NFL) or the former branch of al-Qaeda in Syria, Hay’at Tahrir al-Sham (HTS).

Since the outbreak of the Syrian war, many local observers have warned that Turkey is planning to annex northern Syria. The call for a Turkish mandate for Idlib may be a part of a Turkish plan to expand in the northern governorate, similar to what we saw before in the area of Afrin.

those terriost are demanding Turkey help. This all are propaganda created by turkey . few pwoplw are signing doesn’t mean all of idlib want to be part of Turkey. 90% of idlib population want SAA to take back this province. Turkey is the one who want to divid Syria . Turkey is the main problem fro protecting this terriost.

Indian shut the f* up

don’t mess with the indian they will take your dick and put inside you from behind. you damn turk idiot . terriost supporter.

Are you some special kind of Stupid 90% where do you get these figures most of those people are in Idlib because the SAA killed them and chased them out and they want Assad’s thugs to control them what is wrong with you smelly indian bastard go take a shower you know nothing about Syria.

you look like biggest stupid in this world go check you self you retarded dumb ass .Now tell me how many people got killed during Assad as presdint before war. and how many people got killed in syria with the hand of terriost and their supporter EU/US SAudi /Turk. IF it was not for IRAn/Russia and Hezbollah. Syrian people would have been slave and their women will be raped with the hand of this retarded Zionist wahbhi terriost. and one more thing . Bastard is birn in EU/ and Zionist western world who don’t even know their Father . which include you. If you mess with indian they will take your dick and shove inside your own Ass. you smelly pig

So… The goddamned Turks ally with the terrorists. How “unusual.”

goddamned? which god is that? the racist, bloodthirsty, god in ” part 1″ or “the man-god” having complicated, obscure, family connections in “part 2”.

The real terrorists are your YPG

And they should be the focus of the Turkish Army, not trying to annex the Syrian province of Idlib. Watch, the Americans are still arming the YPG, they will be exporting their “revolution” north soon. What is more important, annexing Idlib or keeping Turkey intact ? It will take the combined efforts of Turkey, Syria, Iraq and Iran to drive the Americans out. A united sovereign Syria, means a united sovereign Turkey.
Don’t fall for the US divide and conquer.

We not side with anyone.think how many civilians Assad will kill.

On August 18, several local councils in southern Idlib (formerly known as Al Nusra which was formerly known as Al Qaeda in Syria) released an official photocopy of a statement on Government of Turkey letterhead, expressing the true desires of the Syrian people in Idlib. It states:

Oh great Grand Sultan Erdogan (TM), thy kingdom come, thy will be done, on Earth as it is in New Constantinople (formerly Ankara). Forgive us our sin of being filthy Syrians, deliver us from evil Animal Assad (TM) and lead us not into the arms of the Great Deceiver Putin (TM).

Oh Erdogan, the most high (on mind altering drugs), put us under your protection and not under the bus which seems to be the thing to do these days. We feel safe under the protective watch of your moderate angels that look like headchoppers, talk like headchoppers and act like headchoppers. Yes, only you can save us and that is by unilateral annexation of the Idlib.

Signed, Syrian people of Idlib who want to be Ottomans.

Is their anything else the megalomaniac wants in this sycophantic masterpiece? Reminder – make sure you delete my note before sending out.

The best solution to the Idlib situation is for the SAA to push the terrorists back inside Turkey itself, once they have nothing to fight for anymore they will turn on their own master like the savage beasts that they are. It would be enjoyable to watch Turkish military having to fight its own created demons inside its own territory.

Hahahaha are you mad mother f*er 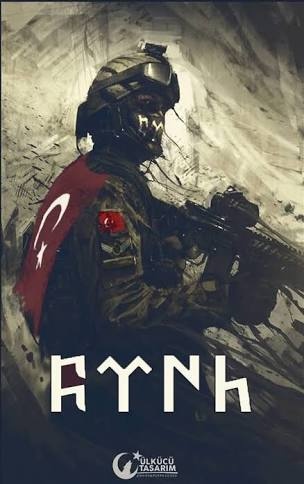 You will cry more

Wow, I’m so impressed, he sure demonstrates how “strong” Turkey is. Reality is, the SAA would steamroll through Turkeys Chicken Divisions

That picture is so impressive I’m about to fall off my chair. Seriously though, this is the average IQ level of your typical Turkish nationalist. Dumb, delusional, and vile. No wonder no one likes them.

SAA couldn’t take on a bunch of rag tag rebels till Russia came in with their Air power and now SAA will take on the Turks haaa what a funny joke have you been smoking the devils lettuce?

what saa? you got no army left,what you got is Iranian hessbolah . some other. small group

I have no reason to cry, my side is winning Mongol wanna be Turkroach.

I don’t know what’s worse, being proud of being a Mongol who has achieved nothing in history, or being delusional about being a Mongol.

go and suck your Erdogon dick your savior .Turkey is pussy Army who want to fight SAA and Exausted army trough Proxy terriosit Force. YPG is Enough to deal with Turk Bastard

I agree ;bomb ,strafe and kill all turco terrorists in Syria. Any left? …push them into Turkey itself! Priceless!

Charlie you seen nothing yet . Prepare yourself for the dooooms day Coming towards you

why don’t you push them towards Israel .or you just talking shit again

yes exactly then only this Turk will understand what they did to Syria. and also this Commenter Turkishgreywolf . Terriost should put hot rod in his BAck yard

Guys, desert from FSA, do you want to die like traitors? Do as this one:

Turkey may have been very helpful in the terrorist invasion invasion of Syria. That was then, this is now. Caught between two super powers, devalued currency and an economic crisis, they won’t be able to provide any more aid for the foreseeable future.

Terrorist invasion is in response to Hezbollah and Iran and Russia invasion who gave them the right to go to Syria and kill people.. next you are going to say legitimate government requested help but that won’t work because Saudi Arabia is doing the same thing in Yemen and you will call them invaders and killers hypocritical people is what i hate the most.

Turkey will not waste much time and effort saving these dirtbags.

Turkey has to decide — does it want to cooperate with Syria against the so-called “SDF” or not? Cooperation with Syria requires that Turkey does not get in the way of the Syrian army’s upcoming operation to liberate Idlib. Idlib has to be cleared of terrorists before the “SDF” can be dealt with.

Why don’t you clean sdf. areas first . if if you can with your panda force

Ain’t going on like that, heck no. Turks won’t do it. Oh no, sir, out of question.

Turks aside, one thing is clear here. Wahhabis are SCARED. Turks won’t lift a hand for them, that’s very obvious to anyone who read between lines. They’re so stupid to try to sell Syrian soil. Their Zionists masters told them so. But Turks won’t fall twice in the same pit.

Turkey is on extremely dangerous ground.

America destroyed Afghanistan, and bombed then into the stone age for harboring al Qaida. If turkey is even considering using their army to protect HTS, turkey will become a target for the whole world to destroy.

Basically means the Idlib Orcs are beginning to panic – they are on edge not knowing where or when the inevitable will begin.

Syria-Hezbolah-Russia-Iran forces will initiate soon the offensive in Idib, and we will see how everything complicate the war. Are Rusia-Iran friend of Turkey ? Will Russia-Iran allow Turkey to keep north part of Syria ? Will Syria allow Turkey to take its territory ? Will Turkey respond sending air support to its terrorists with the excuse that they have been attacked ? This will be very interesting to see.