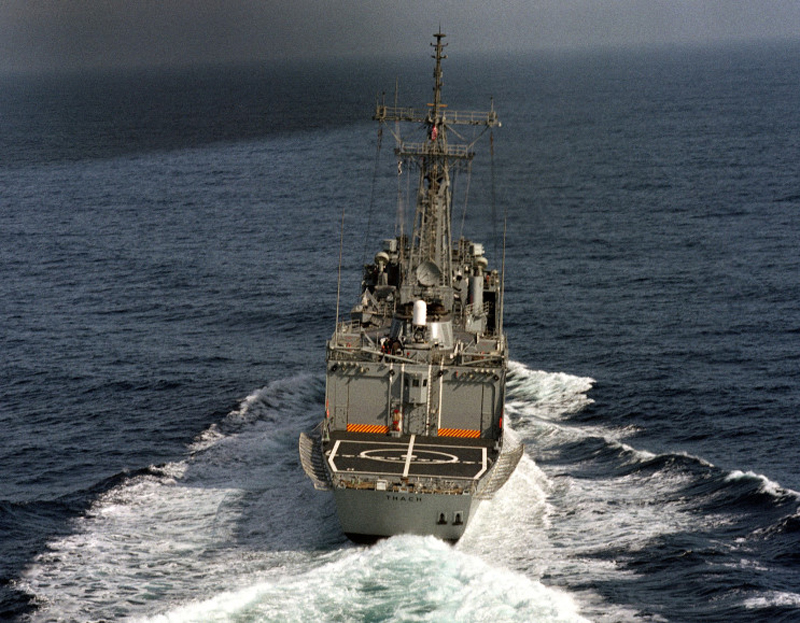 The decommissioned navy frigate USS Thach (FFG 43) has demonstrated a remarkable ‘vitality’ in the sinking exercise (SINKEX) during Rim of the Pacific 2016 (RIMPAC-2016). The ship was firing at with missiles and torpedoes within 12 hours and then went under the water. A video of the frigate shooting was published online on July 16.

At the beginning, the Oliver Hazard Perry-class guided-missile frigate was attacked by navy ships and helicopters that hit the ship with missiles for seven times. Then laser-guided bombs were dropped on the ship by aircraft. After each raid the FFG 43 had been carefully examined for fixing the damages. As a result of the attacks, shot holes were formed in the sides and erection of the ship. A helipad on the stern was torn apart by internal explosion.

A submarine approached the frigate at periscope depth and hit it with torpedo weighing 1.5 tons. The ship was thrown into the air and then sat down heavily. A large dent appeared in the left side of the Thach, the deck on the forecastle was wriggled out, but the ship remained afloat. The frigate sank only the next morning.

SINKEX is live fire training exercises conducted by the US Navy to practice gunnery, torpedo accuracy, and missile drills on decommissioned naval warships. It gives the US Navy the opportunity to practice on live targets, using real ammunition, and observing the results.

The navy frigate USS Thach was decommissioned after more than 29 years of naval service in year 2013.

Thach was laid down on 6 March 1981 by the Todd Pacific Shipyards, Los Angeles Division, San Pedro, California; launched on 18 December 1982.

Thach’s mission was to provide anti-air, anti-surface, and anti-submarine protection for carrier battle groups, naval expeditionary forces, replenishment groups, convoys, and other military and merchant shipping. The new direction for the naval service remained focused on the ability to project power from the sea in the critical littoral regions for the world.

Success in the warfare environment of the 1990s and beyond required thorough evaluation, rapid decision-making and almost instantaneous response to any postulated threat. The systems aboard Thach were designed to meet these demanding and dynamic prerequisites, and to do so with minimum human interface. The Sikorsky SH-60 Seahawk’s video data link system brought state-of-the-art computer technology to the warfare arena, as well as integrating sensors and weapons to provide a total offensive and defensive weapons system.

In addition, computers controlled and monitored the gas turbine engines (the same engines installed on DC-10 aircraft) and electrical generators. Digital electronic logic circuits and remotely operated valves were monitored in Central Control Station which initiated engine start and resulted in a “ready to go” status in less than ten minutes.

Every navy in the world uses their old obsolete ships for target practice, even Russia ;)

These damn things are tough.I wonder what changes were considered from this exercise,either in ship construction or weaponry.

I suspect that the first strike would have put it out of action. Would be interesting to see what a very high speed missile with a large warhead would do. The USS Stark was hit by an Iraqi exocet and that killed over 30 and put that ship out of action.