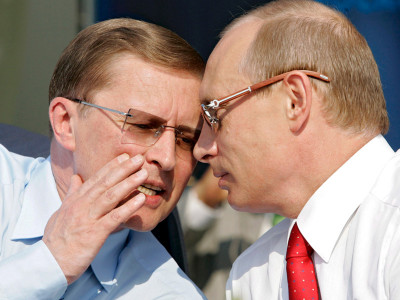 Interview with Sergey Ivanov published by Vesti.ru, translation by J.Hawk
–I have noticed this has become our national pastime–we are almost ready to place bets on when the sanctions will be lifted. My personal point of view is this: they won’t be lifted this year, no matter what they say. The sanctions inflicted fairly serious damage on us but I believe the worst is behind us. I can back this up with evidence. Did inflation decline sharply? Yes, it did. Which means that the price increases on the basic necessities–food, clothing–which were the most painful for the ordinary people, are also gradually declining.
–The prices last year did bite the average wallet.
–Yes, and they are continuing to bite, but not like they did last year. Thanks to the Central Bank’s sensible policies, not only is the inflation on the decline, but the gold and foreign currency reserves are increasing, the Reserve and National Prosperity funds have not been declining. I will cite one more number. As of right now, two-thirds of budget revenue does not come from oil or gas sectors. Few people realize it, but it’s colossal progress.
–It’s a different world.
–Yes, a totally different world. We have long been speaking about diversifying the economy. There is a saying: “nothing good would come about if something bad didn’t hurry it along.” That’s what happened here.
–Which means we kicked the oil addiction?
–We’re on our way. Let me be more precise. I was at the signing of three Evrokhim contracts. Sectors of the economy such as the chemical industry, agriculture, are growing. Foreign investors spoke of it openly–30-35% a year. That’s something to be proud of! All of it is thanks to the sanctions. If the sanctions are lifted, we’ll lift the counter-sanctions, naturally. But what will happen then? And am I implying? Personally, I’d prefer the sanctions were in force for a longer period rather than shorter. That’s my personal view.
–They say that Juncker, Renzi, Sarkozy, all came thinking of lifting sanctions. But they are politicians, you can’t say they have a mandate from the business community. But they have mentioned a specific area: pork production.
–We don’t need pork imports at all.  We also almost don’t need any chicken imports.
–Did they come too late?
–To a degree, yes. The train has left the station.
–They all to a man–Renzi, Sarkozy, Juncker–talked about Minsk Agreements. Are we at a dead end?
–To a degree, yes, I will acknowledge that. Vladimir Vladimirovich spoke very clearly and diplomatically about this issue. Naturally, European business community understands sanctions don’t work, Russia is not at all isolated, because if you think that Europe and North America are the whole world you are deeply mistaken. The economic situation in the EU is far from stellar, to put it mildly. And the ban on supplying traditional exports to Russia, which has been in force for over two years, it is hurting their business more than ours. They came to understand that Russia easily survived sanctions, its economy demonstrated stability, survivability, if you will. There is adaptability. The damage from sanctions is declining with time. And since sanctions are not effective, it would be logical to talk of lifting them. Especially since in modern world no sanctions are effective. They haven’t worked against Iran in the way their architects wanted. That’s a historical fact. It is almost comical to hear them say: you implement Minsk Agreements, we lift sanctions. This is being said by people who haven’t even read the Minsk Agreements, or are using Minsk Agreements and their non-implementation as a pretext. Minsk implementation depends on Kiev far more than on Moscow. But even if we acknowledge the obvious fact that it takes two to tango, then one is left with the interesting observation by one smart individual that sanctions ought to be imposed against both Russia and Ukraine. That would be honest. Then both sides aren’t fulfilling the agreements. But it’s clear that Kiev doesn’t want to and will not implement Minsk. They are, moreover, easy to sabotage. It’s enough to fail to implement the first three paragraphs, and the remainder, including the final one, Ukraine’s control over its borders, cannot be implemented either.
–Many are under the impression this has nothing to do with Minsk. There was the Savchenko exchange, which implies movement.
–It has nothing to do with Minsk at all.
–So you don’t see any connection?
–There is no relationship at all.
–But there was a sense that, maybe, there’s now movement.

–That’s wishful thinking. Ukraine has been using the same approach for over a year. If I don’t want to implement the political aspects of the agreement, what am I to do? I must demonstrate there is fighting. That’s very simple to do. I was the minister of defense for six years. You fire one shot, and naturally there will be retaliation. Then you can say–look, they are in violation! Which means there is no security. What kind of elections can we hold, then?

–But the president did knock out a card from the Ukrainian hand.

–He again said he’s agreed to an armed OSCE mission.

–Yes, in the security zone.

–But not at the elections?

–No, not at the elections. President Putin has more than once said that we concur with Poroshenko’s proposal to increase OSCE’s security. It’s not even clear who’s shooting at whom. I already said that if you want to violate the ceasefire, it’s easy to do. So we are fine with the idea that the OSCE should be able to defend themselves, they can bring along pistols, small arms, to have a basic level of self-defense. We agree with that, but it has to be codified, it requires all the OSCE members’ consent. If we get it, I am personally not against it.

–All the OSCE members? Including the US?

–What do you think, Kiev’s position shifts depend on the US, not on France or Germany?

–So we won’t get anything before the US elections?

–Precisely. That’s why I am assuming the sanctions won’t be lifted.

–Vladimir Putin will soon visit Finland. I think that the non-interaction with Europe has come to an end.

–There are several such countries. You probably can’t imagine Putin’s trip to the Baltics or Baltics’ leaders’ visit to Russia. That’s only understandable.

–The Tallinn Center for Defense Research wrote that the 1st Guards Tank Army that’s being reformed in Russia is directed against the Suwalki region. The US wrote that it would only take 60 hours for Russian tanks to take Riga, Tallinn, Vilnyus as well. Then there was the memorable German White Book entry by the German MOD that Russia is not a partner anymore but rather a competitor, though that’s a compliment to a certain extent.
–We’re thankful even for the little things.
–How much of it is propaganda?
–All of it. From A to Z. I would say, armchair propaganda. The authors probably simply looked at Great Patriotic War maps to see which way the Soviet army attacked.
–The path of the First, Second, Third Baltic Fronts.
–Yes, through Suwalki. As if nothing had changed. So they took all that and used it as justification. But it’s even simpler than that. Baltic States’ economies are, to put it mildly, in a delicate situation. All three states, sovereign members of NATO, have suffered depopulation. To a staggering extent. You look at the Latvian SSR and today’s Latvia, and half the population has vanished.
–I was told a joke in Riga. A sign at the airport: “If you are the last to leave the country, don’t forget to turn off the lights!”
–Exactly right. It’s an obvious tendency. Everyone wants to work as nurses, au-peres, plumbers, in the more affluent EU countries. That’s where they went. So, what is to be done? It’s a well-known method. They loudly shout about the imminent invasion by treacherous Russia which wants nothing other than to enslave the Baltics. Which means there has to be forward deployment. But what does even a single battalion or a brigade mean? Additional expenditures. An economic plus. That has to be recognized. Any military presence is an additional income for that territory or state. So they are killing two rabbits with one stone. There is now a political basis for preserving sanctions and–most importantly–to painting us as the enemy. That’s probably the main objective.
–NATO said that these units will rotate so as to not violate the basic principles of NATO-Russia agreements. In you view, is that a violation?
–Of course it is. What’s the difference? I was the defense minister for six years. So there were Spaniards, and then the Portuguese showed a day after the Spaniards left. That’s no change in combat power. Changing places in a multiplication doesn’t change the final product–that’s a basic school rule.
–Something is changing at the forum since there are now more pieces in the equation.
–There are more of them here, but not in NATO.
–The president’s speech contained a reference to your commission on making legislation more humane.
–We are adopting protections for entrepreneurship in collaboration with the power agencies.
–Whom specifically? What measures?
–The first phase has already been completed. The president said that the first packet of changes to five laws has not only been introduced before the Duma, but will be adopted by the end of the session. It contains reductions in prison terms and fines for major economic crimes and–what’s key–allowing people with powers of attorney access to the prisoner.
–Powers of attorney?
–Naturally. That’s the whole point. Because if someone is locked up, if there is no such access, nobody can direct the firm which will either crash or will be taken over by others. Possibly with the aid of the power agencies. I have to acknowledge that, unfortunately, that sometimes it is like that. And the president very clearly pointed it out. There is also a provision concerning the seizure of assets of firms under investigation. Currently there is no upper limit. How long do you think a firm that has lost all of its computers, documents, can survive? This, too, can be used by corporate raiders. Now the law specifies that the seized assets must be returned within a certain period of time irrespective of the verdict. I don’t believe our business is run by angels. I am a realist. These laws will come into force. Which will be a big step forward.
–And then what?
–These matters require silence rather than PR. We are meeting with entrepreneurs, then with law enforcement, then try to meet them all together to find common language. Any future law will be the outcome of the two sides’ compromise. The president was right to say this is a complex issue and that the law enforcement should not be overly hobbled. They have to do their work. We have no shortage of crooks in business, either.

–Otherwise the system would be paralyzed.

–That would also be bad. As soon as we get additional proposals, we will report to the president and then will formally implement the compromises by transforming them into laws.
–Who are the power agencies? Everyone between firefighters and the FSB?
–No. It’s the Prosecutors’ General Office, Investigative Committee, FSB, and MVD, or everyone who deals with economic crime. Firefighters, thank goodness, are not part of that crew.

I thing to import food from Europa is the most stupid. Russia should be able to feed whole Europa with agricultural product if it wanted to.