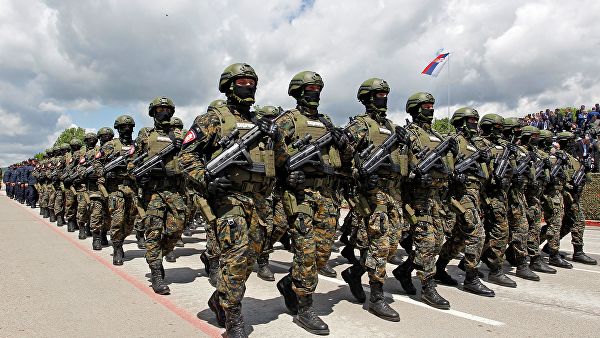 Serbia ordered its troops to full alert on May 28 after heavily armed Kosovo police had entered Serb-populated regions of in the northern part of the Autonomous Province of Kosovo and Metohija (northern Kosovo) and made several arrests.

Serbia’s state TV reported that shots were heard and tear gas was used as Kosovo’s special police “burst into” one of the villages with armored vehicles early in the morning. The Kosovo force involved in the tension reportedly includes at least 73 vehicles.

The region involved in the tensions is located on the contact line between the area controlled by Serbia and Kosovo forces. It is 90 percent populated by Serbs, who refuse to be part of the self-proclamed Republic of Kosovo.

The municipality of Zubin Potok is reportedly one of the  places of tensions. Locals are reportedly building a kind of barricades to prevent Kosovo forces vehicles from moving through the area.

Kosovo Prime Minister Ramush Haradinaj confirmed the action. Via Twitter, he claimed that an “anti-smuggling and organized crime operation” is underway in the area. Kosovo ‘authorities’ said at least two policemen were injured during the action.

Serbian sources described claims about the anti-smuggling and anti-crime operaton as nonsense. Different reports say that from 10 to 13 people were detained by Kosovo forces. A Russian member of the United Nations Interim Administration Mission in Kosovo was among detained persons.

Serbian government official Marko Djuric said the Kosovo forces action is designed to intimidate and expel Serbs from Kosovo and presents “not only a threat to stability but the most direct threat to peace.”

“If this doesn’t stop immediately, there is no doubt how Serbia will react already during the day,” Djuric warned.

Serbian President Aleksandar Vucic says that if Kosvo does not halt his activities, his country will be forced to act.

well you can try and fuck them but words do no good to serbians under attack. Yes kosovo is part of serbia if your leaders have the balls to reclaim it and stop pussy footing around.

Take it easy with ozo

high alert BS. Get in there and help your people. This is not the first time is happening and it will be not the last and it get worst every passing day.

As both Serbia and Kosovo want to enter EU they will either solve issues and make compromises, or they will stay outside of EU.

Yet one can hardly blame the Serbs, if they act militarily against this type of provocation, if it continues. To enter an area that under dispute and which has been since the war, is just stupid and ill thought out by the Kosovars! Hopefully it isn’t the UK or Canada egging them on! I wouldn’t be surprised if it was The Empire striking back at the Russians.

Maybe Serbia and Kosovo should start discussions whereby Kosovo will hand over parts with say more that 65% serbs to Serbia and vice versa.

The problem is twofold – firstly, a unilaterally declared independent Kosovo has never been a legal entity under International Law – it is a Serbian province under foreign (NATO) military occupation. Secondly, the geographical spread of the Serbian and Albanian populations in Kosovo is not quite so neat – most Serbs are in northern-most area adjoining Serbia proper, but other pockets are also in south and isolated from Serbian support. Whilst there are pockets of Albanians inside Serbia proper – the Presevo Valley – Serbian authorities do not harass them in same manner that Kosovar authorities repeatedly and violently harass Serbian communities inside of Kosovo.

Kosovo used to be an autonomous region within Serbia, over 90 % albanian. Under Milosevic serbs ended autonomy and started repressing the albanians. which led to a résistance movement. Serbia started bombing and ethnic cleansing of over a million refugees. At that point Europea and NATO intervened.

So, independence in quite legal. Still the two have to talk and solve outstanding issues. Enclaves should be debatable in both entities.

So if kosovo is legal with the arguments you presented, i see no point in fussing.about crimea.

Both are true. Crimeans didnt wait for the situation to get outnof hand, they were wise.

Exactly backwards: Albania and Ukraine are both US deep state puppets created to prevent peace from breaking out. https://www.voltairenet.org/article159888.html

‘So, independence in quite legal.’

You don’t get to make up International Law as you go – a unilateral declaration of independence purely backed by NATO military force is not a legal constitutional exercise – and Serbia has never ceded legal domain over its long recognized southernmost province.

Incidentally, the Kosovar leadership that was installed by US was composed of ex-KLA members – who only two years prior were listed as international terrorists by the US State Department. The KLA were not a ‘resistance movement’ – they were always a separatist, Albanian ethno-nationalist, terrorist faction, notorious for ambushing and murdering isolated Serbian police stations and villages.

Garbage NATO propaganda. Albanians were majority because they were ethnically cleansing Serbs for centuries, including during Tito’s rule (at the same time Albanian communist dictator Enver Hoxha exterminated ALL national minorities in Albania). Then in 90s Milosevic tried to suppress Albanian separatism, but NATO supported and armed terrorist UCK, the same way they did in Syria for example. There was no “bombing and ethnic cleansing of over a million refugees”, you’re just full of shit beyond belief. There was just one fake ‘massacre’ – a few of dead terrorists portrayed as civilians by the US media (Racak); then NATO started their terrorist air campaign against civilians, and then conflict escalated and many Albanians fled (not nearly 1 million tho).

NATO utterly failed to destroy serbian military but instead focused on bombing civilian targets, committing many war crimes, and Milosevic eventually capitulated; Albanians then committed the real genocide against the Serbian population. In Pristina, capital of Kosovo, there was 40.000 Serbs before the war. Now there are 20. Not 20.000 but 20. Definition of genocide. Albanians even destroyed graveyards, ancient churches, absolutely everything. That’s why there are 90% of them in Kosovo today, because they exterminate everyone else (not just Serbs). However they did failed to genocide North Kosovo, at least for now.

klove and light
Reply to  dutchnational

this is a CREATED conflict…it is not supposed to get solved….

U.S.backed terrorist quasi-state whipping up trouble in the Balkans. Nothing new here.

Serbia, another one of those Russian ‘allies’ that do not get any proper S-400 defensive weapons to defend themselves. Serbia got raped by NATO because Russia only sells junk to their allies, and Russia only sells their best stuff to NATO, such as S-400’s to NATO-Turkey.

Russia was in no position to assist Yugoslavia throughout 1990’s – under the hapless President Yeltsin and overrun by US interests, who instigated a ‘shock treatment’ neo-liberal economic order that severely impacted the entire country. However, Yeltsin did actually make a belated intervention in Kosovo – but it was far too little and far too late – by sending Russian ground units to seize Pristina airport right in front of the advancing NATO ground forces.

klove and light
Reply to  Bob

yeltsin needed someone to hold is dick while taking a piss

ps. and another 2 People helping him sit down and stand up

Albanians are the justification for ethnic cleansing.

and the dices Keep on turning……..anybody expected something else, is totally brain washed or just simple stupid. Balkans…fake created states .. Gulf states the same……. Israel the same…

and where do we have the Problems………..correct… These articial fake created nonsense states…….Kosovo is no different than Bahrain or Israel……… a pain in the ass….

Don’t worry guys, our traitorous president won’t do anything. He is in a deal with narco clan from Kosovo and doing everything westerners tell him to do. Our people in our province Kosovo is all alone in fight.

Serbian army is another fake army..after serbians expel Milosevic…all govern there have beeen rule by pro western presidents!…therefore Kosovo army can enter there and capture whatever they want!..Serbian only can protest and nothing else!

More theater for the absurd; the Serbs need no one’s permission to enter their own province, call out the NATO criminals and their Albanian hyenas then clean them out, Serbia must heal this wound for it to be a legitimate state.

Kosovo is now the organized crime centre of Europe, run by ex-terrorist KLA mafioso. It is the main distribution point for heroin into Europe, likewise weapons smuggling, and a host of other organized criminal activities stretching from central Europe to Spain. Aside of drip-fed EU subsidies, organized crime is essentially the basis of the Kosovo micro-state economy, all overseen by the state officials who learnt their organized crime trade in the terrorist KLA faction. The same KLA that the US State Department formally listed as an international terrorist organization for majority of 1990’s. The Kosovo Albanian micro-state is not an ally – it is an unsustainable giant liability.

Currently, the tensions and conflict are Kosovo Albanian driven – however, your absolute silence about your ‘brothers in arms’ being the premier new European criminal syndicate on the block is all rather telling. Still, when the KLA murdered Serbian villagers and harvested their body organs for sale on illicit international body parts market, take a guess where many of those ‘exports’ ended up – Israel. That probably accounts for your glaring silence.

BREAKING: Mr Wohl’s personal team of 100 nose doctors have just scheduled him for massive nasal surgery – 5 excavators, 2 tractors, and a wrecking ball will be involved wish his doctor’s luck, it’ll take anywhere from 24-48 hours, and it will only shorten his nose by 5 inches… progress nonetheless! :==}

serbia should be wise not to instigate any unprovoked attack here otherwise the US Military will slap them harder than 1995 and 1999 combined! HA

I know I shouldn’t feed the troll – but in your cease – eat shit and die! HA

Ah he’s a baby, still not wise to the ways of the world.

SOLUTION: Mr Wohl should inhale Kosovo and Israel… leaving the rest of the world in peace.