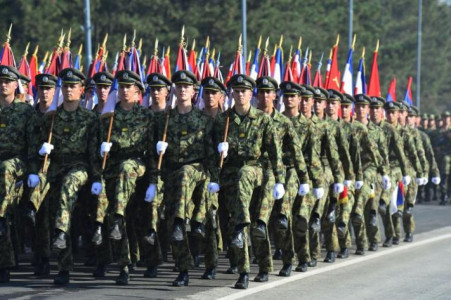 Members of the Serbian Army are celebrating its day, November 16, to commemorate the same date in 1914 began one of the most important battles in the First World War – the Battle of Kolubara.
Defense Minister Bratislav Gasic congratulated holiday to the members of the Army, pointing out that members of the Army achieved outstanding results in training and that they maintained the required level of operational capabilities.
He said that the units of the Army successfully carried out the tasks of all three missions of the Serbian Army.

“I am proud to point out how you provided selfless assistance during natural disasters that have befallen our country”, said Gasic.
Serbian Army is the largest, and oldest form of the army in Serbia, and its organization, structure, weapons and equipment are adapted to the missions and tasks of the Army of Serbia, primarily for operations on the land.
The Army consists of First, Second, Third and Fourth Brigade, Special Brigade, Mixed Artillery Brigade, River Flotilla, Third and Fifth Military Police Battalion, 21st Battalion…