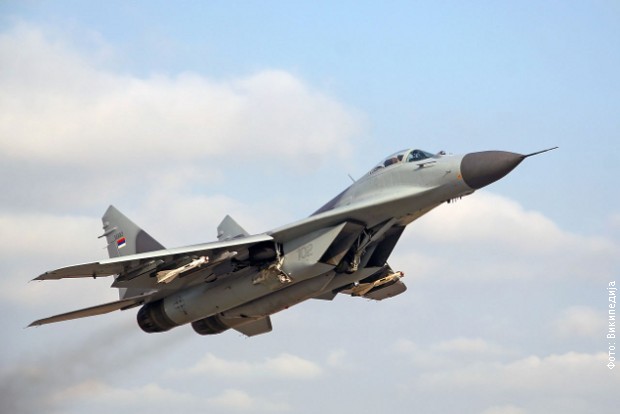 Serbian Prime Minister Aleksandar Vucic has announced that he will travel to Moscow later this week to sign a contract to purchase six MiG-29 fighters, ‘AP’ reported.

The agency estimated that this could contribute to tensions in the Balkans.

Serbia is procuring MiGs in the midst of an “apparent attempts by Moscow to prevent the unstable European region from joining Western institutions,” according to AP in an article entitled “Serbia will purchase Russian fighter jets to counter the threat of NATO”.

At the same time, AP is citing Prime Minister Vucic that Serbia needs fighter jets to protect their freedom and sovereignty.

“Although formally aspiring towards EU membership, Serbia is sliding towards its traditional Slavic ally Russia”, AP reports, adding that Moscow is making a great propaganda effort to keep Serbia away from the West.

Regional tensions have risen in October after accusations of coup attempt by Serbian and Russian nationalists against the pro-Western government of Montenegro because of its efforts to join NATO, the agency concludes.

New ones? Refurbished ones? They could probably use more then just 6 aircraft considering that their current MiG 29’s are from what, 80’s? 90’s?

These former Yugoslav republics are broke. They lost everything with their civil war. I’m surprised they can buy any.

No, Serbs did not lose all their planes. They kept many of them safe in underground bunkers. They did have some shot down by NATO – but sometimes it was after they made a successful attack on the NATO bases in Bosnia and Albania. After the Kosovo war ended, some of these planes were flown from Kosovo, where they were in an underground bunker, to Serbia. Also, NATO bombed a lot of fake planes and tanks. Carpenters built wooden models of planes and put them out as bait on runways and such. There’s actually some photos of these full-sized wooden planes being built during the war. Also there were some blow-up tanks.

I see no detailed info about planes (my guess is they are refubrished). Four existing ones are supposed to be refurbished for a total of 10.

Enjoy watching the JAG TV series… However. ..the series allways paints the Serbs as the Evil seeking a chance to do more evil. Hollywood and it’s Empire propoganda. The recent years Internet chat concerning False Flag 911 has done alot to bring the Empires Nato war crimes vs Serbia to Light.

And it’s especially disgusting because the producer and writer for Jag, Donald Bellisario, is half Serb himself – just check out Wikipedia. His mother, Dana, was a Serb with the maiden name of Lapcevic. Many American Serbs (or part Serbs), especially if they served in the U.S. military, like he did, just push the anti-Serb propaganda to prove themselves good Americans – or maybe they like to lord it over or spit on Serbs in the old country. Another is Serb-American poet, Charles Simic, who, from his statements, follows the anti-Serb, blame-the-Serbs-and-Milosevic-for-everything propaganda line.

Thanks for the info JJ Serbia of today….are they getting support from Putin…. Or are they kinda on their own vs Empire/NATO?

Well, I am not Serbian and do not live there – though I keep tabs on the situation as much as possible. It seems to me that Serbia is mostly left on its own, but does receive mild support from Russia from time to time. Russia stands firm at not “recognizing Kosovo” and has a humanitarian aid center in Nis. Russia has put out forest fires for free in the summers when they’ve had them and has done a lot of work cleaning up NATO’s mess of cluster bombs and un-exploded ordnance. But other than that, it doesn’t do much to counteract the pressure on Serbia, and it seems to have a neutral to positive attitude towards the EU and Serbia joining it, even though the EU is tyrannical and used as a tool against Russia itself (the sanctions for, example.)

Russia also did nothing to help Serbia rebuild right after NATO bombing, when Milosevic was still standing. The Serbian government was working feverishly, night and day, and even underground before the NATO bombing stopped, to rebuild the damage – they had to repair things like heating plants before the winter. The Serbian government was even flying in Russians, at its own expense, to try to get them interested in the rebuilding. The Russians (and even arch-anti-Serb propagandists CNN) were amazed at the pace of Serbs working to reconstruct the damage. However, the Russians never seemed to get involved nor finance any of this. Then before and during the election between Milosevic and the DOS (which the U.S. heavily supported and worked with), and the runoffs between them after the close election, Russia was threatening to cut off Serbia’s gas for debts. Horrible timing. Was it purposeful? These threats, combined with the heavy western maneuvering such as the west paying the mine director of the huge Kolubara coal mine a million dollars to have all his workers strike to put pressure on Milosevic, helped swing things against him. (Not to mention that the ballots (and Parliament and some museums, etc.) were burned by the western-backed Otpor protesters – so no one knows for sure if Milosevic really lost to the DOS or not).

The thing is, that a Russian, maybe Lavrov, bragged a few years ago, about forgiving SEVERAL BILLIONS of Afghanistan’s debt to it. I don’t think Serbia had ever been forgiven any debt. (It seems strange to me that Russia would not cut Serbia any slack for debts to Russia after it was bombed up, for 78 days and nights, by an organization which was designed to fight the U.S.S.R. and Russia. So Serbia absorbed a lot of missiles and bombs ostensibly meant for Russia. Does it not get any credit for that – and for opening up the world’s eyes how aggressive NATO is? And for giving the Russian bombers a much freer hand to deal with the Chechnya war – the west’s condemnation was heavily muted because any cries of “Russia’s bombing/attacking civilians” could be countered with all of NATO’s “collateral damage.”)

So, to sum up, Russian maneuverings at the time, 1999 and 2000, in my judgment, pushed the Serbian government to fall to a western-puppet one, and Russia at the time didn’t seem to care or realize the long-term danger. (It almost seems to me that those in Russia wanted Serbia to fall so they could wash their hands from the pressure to help Serbia. Because even those in the west commented on Russia not helping Serbia during the bombings and being ineffective. And after Serbia fell, I did notice Russians claiming Serbs betrayed their own country. Yet where was Russian help/support from after NATO stopped bombing ~June 12, 1999 until October 5, 2000 when the Milosevic government fell?)

Russia was also a major investor in corrupt, criminal pro-west Montenegro after it split from Serbia in a close vote (and in which Albanians from U.S. were flown in and poll stations were in Kosovo and Albania, over the border from Montenegro), and just after the split it invested most heavily. Now Montenegro is going along with the west’s condemnation and sanctions against Russia, and Russian assets and investment there may be under threat. It is said that U.S./NATO wants to push Russia out of there.

The absolute worst was Russian arms merchants selling weapons to the Croats and Bosnian Muslims during the ’90s war. This is documented by Slovenian journalists who were actually pointing to their own countries very heavy involvement in sending arms to the Bosnian Muslims from its own stocks as well as being a major middleman in arms from dozens of countries to the Bosniak forces. A Croat recently stated he was surprised at Russia’s condemnation of their country given that Russia sent Croats arms in the recent Balkan wars. A Scottish-British mercenary (and Brit intelligence agent) in the Croatian special forces in BiH during the war, John McPhee, wrote in his book “Silent Cry” that Russian weapons were arriving by plane to a Croatian island, specifically set up for these deliveries.

However, Russia support is vital, and one of its few hopes nowadays, and even if it is not helping Serbia a lot, Serbia can’t afford to lose any of its support.

Again…thank you for the comments and perspective JJ. Have copied your post to my records. As they say in sales…location,location.. Serbia has the misfortune of being in this difficult location. It must be a scar on the Heart and Soul of Serbia what they went thru, And who looked on.

Here is the prophetic description of Russia’s support to its allies. Lo, thou trustest in the staff of this broken reed, on Egypt; whereon if a man lean, it will go into his hand, and pierce it: so is Pharaoh king of Egypt to all that trust in him.

What is the Serbian expression about being protected by the Russians and fed by the Greeks?

Fed by Greeks? Are they able to feed themselves? Protected by Russia you mean like in 1999?

I found it; it is a sarcastic expression. It goes: Teško onom koga Rus brani i Grk hrani or Koga Rusi brane i Grci hrane taj je najebo

So, Serbia is finally getting around to replacing the handful of MiG-29s they lost in the 90s…and the AP thinks this is some kind of big gesture?