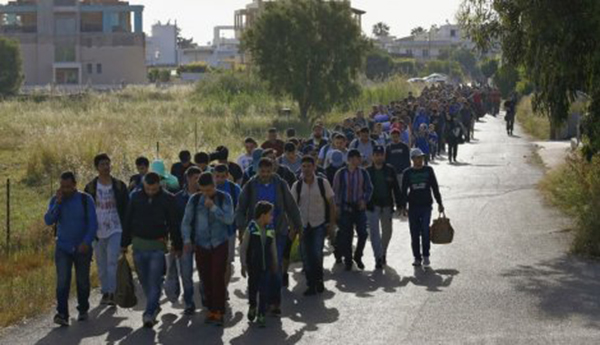 Meanwhile, from September last year until today, EU has done almost nothing to prepare an adequate response for the new wave of migrants that will start to flood us already from the second half of March. True, they did try to make some kind of a deal with Turkey, but that is a long shot. Turkey should be holding onto the refugees from Syria and in return, three things have been promised to Erdogan: 1) resumption of talks for the EU accession, which for him only has symbolic meaning (he is accepted as an equal partner, he is not a “dictator” any more); 2) three billion euro’s to help him deal with the needs of refugees; 3) visa-free regime for Turkish citizens (with all countries in the Schengen zone). The first promise has been fulfilled, but for us, that is the least important fact. With the promised funds, it will be slightly harder, but with the visa-free regime, that will be something else thing altogether. Turkey is already drawn into a war, already there are deaths in Diyarbakir and not only will it be hard for Turkey to absorb Syrian refugees but we just may start seeing new unfortunate people coming from Turkey (or, to be more precise, the Turkish part of Kurdistan). If the visa-free regime does get instated, even those people who have nothing to do with the Kurds or Kurdistan will start flooding into Europe. A few German politicians are already warning of this possibility and claim that Merkel went overboard with her promises to Erdogan. Anyway, the EU-Turkey deal has not yet been implemented to the fullest and even if everything went perfect in its implementation, we can expect the initial results in October. Now, if the migrants keep coming with the same intensity like in 2015 (even though all predictions are that significantly more will be coming), by October, around half a million of them will go through the Balkan route. And, what will we do? Judging by the statements of prime minister Vucic, Serbia will wait for the EU solution? What will EU do?

“EurActiv”, a business knowledgeable portal has, on the 2nd of February, stated that “650 million euro’s from the Madad Fund will be used not only for improving the refugee situation and their retention in Jordan and Lebanon but also their retention in the western Balkans, more precisely in Serbia and Macedonia. There is speculation of figures around 50,000 refugees”. The news reporter from the said portal had received this information in a briefing organised by EU officials for a select few reporters. Afterwards, everything has been denied and placed in a different context but there should be no doubt that the initial information was correct. Firstly, in these situations, after the briefing up until now “EuroActiv” has made very few mistakes. Secondly, the denial has only come after huge hype and disgruntlement in Serbia and Macedonia, which is the last thing that Brussels needs in this case. Thirdly, Dimitry Rogozin is a lot better informed than “EurActiv” is and during his last visit to Belgrade, it wasn’t by an accident that he mentioned that the scenes from the streets of Cologne could be repeated on the streets of Belgrade. He knew very well what is being cooked up for us and wanted to warn us. Now, the fact that Zorana Mihajlovic misunderstood all of that and hurried to answer back to Rogozin is our problem and not Russia’s.

Last but not least, soon after the London meeting, the Amsterdam meeting of EU foreign ministers took place also. After the meeting, the foreign minister of Serbia stated that “Serbia will not be a car park for migrants”. Why did he reaction in this manner? Because, when we look at the statements from other attendees, we can get a clear picture that it is exactly that topic which was discussed at the meeting.

Bert Koenders, the foreign affairs minister from the Netherlands (who spent many years as a minister representing the Netherlands in the NATO parliamentary assembly, a typical representative of their diplomatic school, who never about something he doesn’t know about) has said that it is needed to “keep the European approach towards the western Balkan countries which are part of the refugee corridor and help them cope with the problem”. As it is, until today, we didn’t have too many problems in with that issue. Key problems are in Germany, Italy, France, Denmark and Sweden. Why is now all of a sudden the brunt of the problem shifting to the Balkans? Why is Koenders offering us help? Federica Mogherini was also in tune with this and Sebastian Kurz has stated that Austria will send its military into Serbia and Macedonia!? Did anyone ask us anything in regards to this?

It is exactly what we were warned about that is starting to happen now: EU will be shifting the brunt of the crisis onto the Balkan soil and will be making a sanitary corridor out of it. The EU has no other political solution and as Serbia obediently accepts to participate in the EU projects, it will accept this one as well, and by autumn we will already be blessed with dens of thousands of refugees. Prime Minister Vucic has already offered for Serbia to accept “five, ten, fifteen thousand refugees, the number being however many we make a deal with”. On what basis has he made his approximation, how can he cite these numbers, which departments have helped him with it, what consequences will be there… We don’t know that. We know that any citing of numbers always ends up bad for us. On the grounds of – where there is fifteen there will be fifty, where there is fifty there can be one hundred thousand… Yes, Serbian prime minister has even set one (inconclusive) limit: if we accept that many, Poland will “have to accept seventy – eighty thousand”. But what is our prime minister on about!? Does anyone inform him about the happenings in Poland? Poland will not accept anyone. The maximum number that the government of Beate Sidlo is eight hundred (it isn’t a mistake – 800). This is one of the questions why Poland has gotten into a difficult quarrel with Germany (to understand just how tense the bilateral relations are: once again there are caricatures being drawn with Angela Merkel having moustache and in SS uniform, with happiness and approval of most of the population). Balkan countries, with Serbia at the forefront, are the only ones who obediently participate in this.

We will have to force the refugees to stay on our territory. Those people don’t want to stay in Serbia, their goal is western Europe. But, if we don’t want to keep them here, we already got an offer from Kurz: the Austrian military will do that on our territory. An important factor is that most of the costs related to all of this, Serbia will have to pay itself. Our budget will be emptying because of us defending EU from immigrants.

To go back to the beginning: Serbian authorities have made a catastrophic mistake by leaving their fate in the hands of EU. The obligation of Serbia in the migrant crisis is to be a good host to the unfortunate people who are fleeing from war and to not give them much trouble on their way towards the end destination. If someone wants to stay there temporarily, we are obliged to accommodate them (according to the UN rules), but such people are almost nonexistent. Serbia doesn’t have a single legal or political obligation to accept the situation in which we are slowly drawn in by the EU. That, in the Balkans, can cause unforeseen consequences. That way, we will have an increase in political and social tensions in various ways.