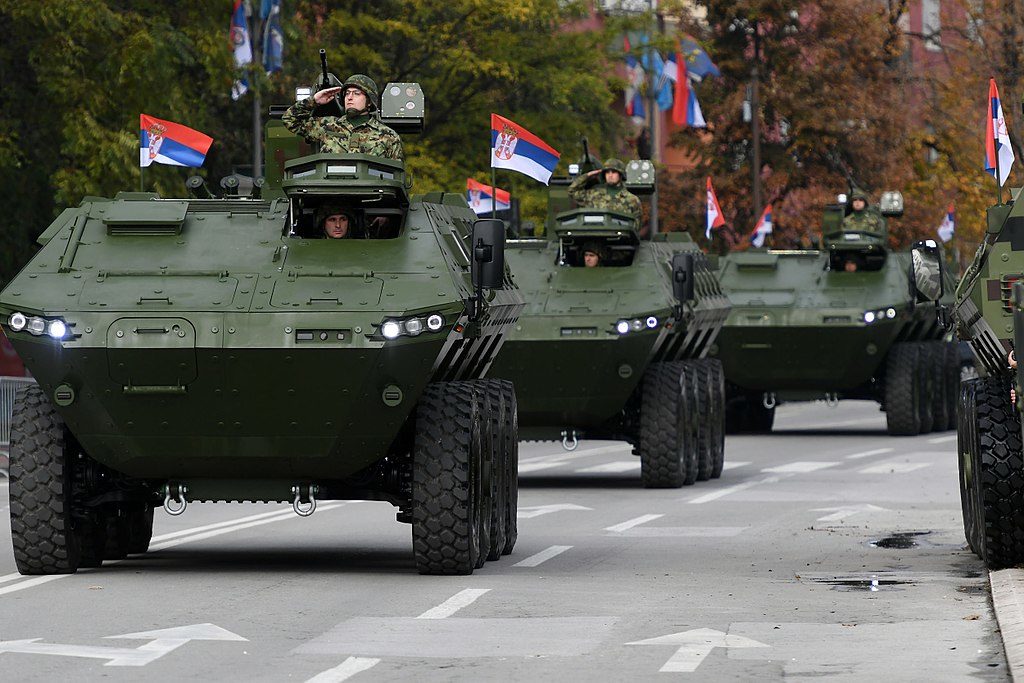 Serbia may have to employ a military option to defend serbs from Kosovo-Albanian forces if provocations continue and the international community ingores the situation and further, First Deputy Prime Minister of Serbia Ivica Dacic told Izvestia.ru.

According to the top Serbian official, the Albanian side deliberately creates provocations in the region in order to expel the Serbs from northern Kosovo. He also expressed the hope that the situation would not come to an armed conflict and Belgrade would not have to turn to Moscow for help.

Dacic noted that Serbia is using diplomatic channels to inform the KFOR and the international community of the situation. However, if the calls from Serbia is ingored and Albanian-Kosovo forces continue their policy, Serbia will have to act.

Well I hope they have their air defense ready to go Next time they lose they might end up under NATO occupation in Belgrade.

Any one know of their military readiness? Or are they like the Syrians who need someone to hold their hands?

We’re probably on the same level as Syrians. Maybe worse lol. But our fighting capabilities are not our weak side, our political will is our weak side since our politicians are mostly thieves and idiots.

Welcome to the club. I’m just glad my country doesn’t have these problems. But I don’t think they can bluff this.

Serb poloticians do this (calls for war and similair stuff) all the time, it gets them the votes to win reelections. Vučić will recognize the independence of Kosovo (there will most likely be a land transfer between the 2) He has already talked about it, now he has to get the Serbs to get behind his plan.

If war gets votes giving up Kosovo would seem like a bad idea for a politician.

1 key condition of Serbia joining the EU is the normalization of relations with Kosovo (Belgrade – Pristina) and the only way for them (realistically speaking) to do so is to recognize Kosovo’s independence. I mean, I don’t see the 95% of Kosovo’s population (All Albanians btw) voting to rejoin Serbia, so the option of what has to be done is clear.

Kosovo is Serbia! If they want peace we will give them peace, but if they choose war the Shqiptars will be crushed , and no NATO airforce in the world will be able to help them this time around.

Brave words but unless Serbia has been training and building for an all out war effort all these years this will end in tears.

And I haven’t heard of that. So it seems like a bluff to me and a bad one at that. You can bet the us has all their assets counted.

A lot has changed since 1999 my friend, it’s a totally diffrent ball game this time around, and Putin has warned that he will crush anyone who dares to attack Serbia or republika Srpska.

I wouldn’t put to much faith in Putin’s threats.

The man is well known for living up to his promises, so don’t be so sure about that, besides, Serbia is perfectly capable of to liberating Kosovo by her self, but in order to this she needs reasurence from Russia that no foreign involment will be tolerated.

Turkey is anxious to recreate the ottoman empire. Will Russia sacrifice its Turkish influence to take up another helpless client state? They’ve got weapon deals and all types of energy deals. Big profit. Serbia has its hands out and offers mostly expensive conflict.

Note the lessons of Ukraine and the donbass. Russia left those people out there as cannon fodder to bleed his enemies resources.

Once they deliver the s 400 and get paid ,. Russia will give the finger to Turkey on Syria and everywhere else. That is why Putin is making Erdoscum happy , at least for the time being

You may be absolutely right but after decades of impunity I am very skeptical or pessimistic about the resolve of any other “capable” country to step in and confront the U.S. On a side note. What is going on in the Persian gulf will be very telling. The U.S. has blamed Iran outright for attacking those tankers. If history tells us anything then the U.S. will be bombing Iran soon. IF the U.S. does not bomb Iran then it is a clear sign that the U.S. “fears” Iran’s capabilities and it is a glimmer of hope that what you believe is true.

please, note that if you have to take someone’s threats seriously, it’s the Russian ones, specially with everything has come after 2014

Yes a little cynicism is warranted. You can bet there’s a price that will let him abandon Serbia.

you are a total idiot , extreme groups portraying as muslims such as ISIS are western, israeli saudi and qatari , turkish and european backed and created to make muslims look like devils. RETARD ! If Islam was a killing machine with more than 20% of muslims in the world then all of us would be dead by now, RETARD !! Jew troll get bent !

Yea, we saw what happened the last time Serbia tried to use it’s military to quell the Albanian terrorists.

Yes NATO showed its true colors, that of an aggressor, its end will come if it does this again.

I hope you are right Raptar.

The current geopolitical situation in the Balkans doesn’t allow them to do so.

GOOD THING HILLARY ISN’T IN THE WHITE HOSE OTHERWISE SHE WOULD HAVE ALREADY BOMBED THE HELL OUT OF SERBIA AND THEN GIVEN IT TO THE MOSLEMS LIKE LAST TIME.

World War One was the end of four empires after Austro-Hungarian empire assaulted Serbia. Thousand Years Reich ended in Serbia loosing the momentum in Operation Doomsday (invasion of Yugoslavia Kingdom and Greece) to be frozen in Russian winter. US empire begins to crumble in assault on Serbia when its technology myth crumble, F-117 was shot down (some boasts one B-2 was also shot down together with number of other damaged) Russia realized it can also resist when 18 years young Serbian conscripts fends off the largest military alliance ever without loss of territory…

Hey Dusan, Austro-Hungary declared war on Serbia after your local hero,Gavrilo Princip. Princip one of a group of six assassins (five Serbs and one Bosniak) coordinated by Danilo Ilić, a Bosnian Serb and a member of the Black Hand secret society.The Black Hand were controlled, aided and abetted by the British Secret Service. They MURDERED the Arch Duke and his pregnant wife………….that ain’t nothing to be proud of, or the consequences…………….. WW1 !!!!!!!!!!!!!!!! I support Serbija, but don’t try to bend history.

Your film is about something I didn’t mention. I had on mind the curse of four empires in the war that followed after A-U assaulted Serbia. Nothing else.

Recently, a former police officer said on tv that Albanian Mafia became second stronger in Europe due to transports of cocaine from Columbia to Albanian coast and then to Kosovo

Glad to see you are putting the truth out there. Kosovo has the largest U.S. Airbase ( Camp Victory ) in the whole of Europe. It serves are a central hub for cargo-drones c/o the IDF and CIA which bring in Drugs and Organs 24/7 around the clock. The Mossad/IDF are based there too.

In Serbia the worst problems we have with our traitor president Vuchich, together with his gang, including that guy Ivica Dachich. They are in a deal with Kosovo Albanian president and his gang dealing heroin all around west Europe. They are in many business activities together, Tachi and Pacoli invested their heroin earned money in Serbia buying companies and building houses. All together they are under the control of gangsters from EU and USA….I mean politicians and their partners.

Hey, I thought it was under DSB control, at least as per great documentary “Jedinica”. I don’t know, thats why I’m asking; Are “Crvene Beretke” still active or were they disbanded since assassination of Zoran Dindic. Or is there another spin off orchestrated by DSB under order of Vuchich?

Love to see them try. USAF and NATO would smash them even harder than in 1999 and they wouldn’t last a month. Those old S-125s are too outdated for our F-35s, F-22s and electronic warfare :)

Kosovo’s Army would completely humiliate Serbia. If USAF gets involved, Kosovo would advance all the way into Belgrade and annex all of Serbia :)

So you are a scholomo right?

yes indeed. This jew troll thinks he convinces anyone over here, just makes all of us laugh.

Thousands of you Jihadi scum will die before anyone protects Al Qaeda again..

“our Albanian Kosovar brothers and sisters”……………..HaHa, laughable, but you do reveal a bit more about yourself, you ISIS shit-stain.

US Military/NATO will not tolerate any foreign interference in Serbia either. If that occurs, Serbia will be toppled and the Kosovars will be freed

Kosovar’s completely devastated the Serbs in 1999, so the coward Serbs resorted to indiscriminate attacks and massacres like the butcher regime army does in Syria. Serbia wouldn’t last a day against today’s USAF and NATO airforces

After the war extensive searching found no evidence of mass graves or any large scale killings. Just one of many endless really propaganda stunts to mold naive and impressionable minds.

you again troll ? jew hasbara scum again ? ; Serbia was attacked by NATO, a troll and a retard also , tired of your crap, BLOCKED

You really don’t know anything…. How sad… Let me give You a hint regarding heroic NATO forces and Albanian cannon fodder in 1999; Pashtrik and Koshara. Two battles where NATO were pretty heavy beaten by back then Yugoslav Army.

Hey , der Untermench is back in town. Serbia now enjoys the protection of Mr Putin , and no, he will not let Serbia be attacked again in your life time……………….mmmmmmm, but wait, that could be quite short………… So C’mon, tell everyone how your investments in Human Organ trafficking are going ?????????? Its one of Bizraels largest earners, all those Palestinian kids organs being flown by IDF drones to Camp Victory in Kosovo. Same goes for all that Heroin and Cocaine travelling into Kosovo by IDF drones………………..very lucrative, and I expect you have many shares invested in such criminal undertakings. How did your investments in the Mexican Human Organ factories fare ? You know, those flashy big medical facilities built by Israeli ill-gotten gains, and staffed by Indian medical staff…………….. C’mon, wake up Jacob “Wanker” Wohl, how else can a shit-stain of a country like Israel support itself without help from its Kosher-Nostra.

Albanians in kosovo r incompetent criminal thugs; without CIA collusion the KLA would have entirely failed. the USA hypocrisy has been exposed—they stole Kosovo from Serbia without a referendum…and now the coward amerikans can only throw tantrums about Crimea…LOL and obviously amerika has done zero to challenge Russia in Abkhazia, Transniestria, S Ossetia and Armenia…the US is a paper tiger as Mao observed…losing wars in Afghanistan, Syria, etc—they r even too incompetent to produce regime change in Venezuela The amerikans r too cowardly to intervene if the Serbs intervene in Kosovo…since Russia has made it clear to the self doubting feminized amerikans that their insecure bullying will no longer be tolerated