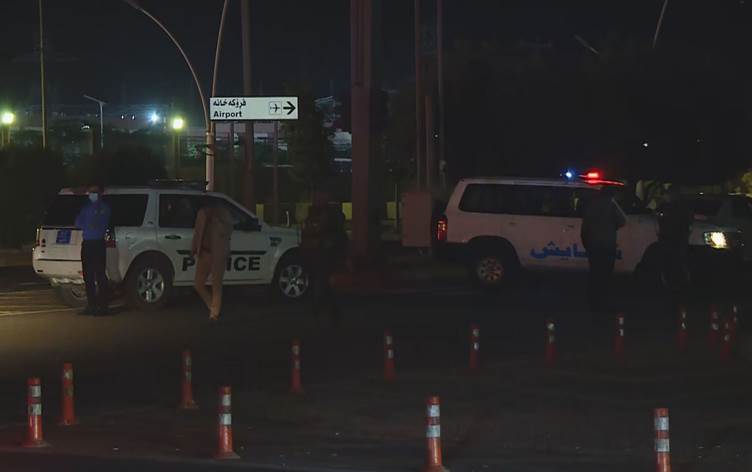 This was reported by Kurdish officials, and there were no casualties according to initial information.

“After the relevant authorities investigated the explosion at Erbil International Airport tonight, the results show that it was carried out by a TNT drone and directed at the Coalition forces at the airport. There are no casualties and the investigation continues to find the source and place of the drone,” the ministry said in a statement.

Before the statement by the interior ministry, the Kurdistan Region’s Counter Terrorism Unit said the airport had been hit by a rocket.

The US-led coalition said nobody was injured.

“An unmanned aerial surveillance system landed on a storage hangar at Erbil Air Base… A fire has been extinguished and damages are still being assessed,” the Coalition said.

A security cordon blocked all access to the airport, witnesses reported. The governor said air links were not interrupted.

“It seems the same militia who targeted the airport two months ago are at it again,” Iraq ‘s longtime former Foreign Minister Hoshyar Zebari, a prominent Kurdish political figure, posted on Twitter in an allusion to pro-Iranian factions.

There was no immediate claim of responsibility for the attack, which caused a loud explosion heard across the city.

A little-known group calling itself Awliyaa al-Dam (Guardians of Blood) claimed the February attack in Irbil and in a follow-up statement vowed to keep targeting U.S. forces in Iraq.

It didn’t assume responsibility but reportedly praised the attack, according to Reuters.

It was the first known attack carried out by an unmanned aerial drone against U.S. forces in Erbil, amid a steady stream of rocket attacks on bases hosting U.S. forces and the embassy in Baghdad that Washington blames on Iran-backed militias.

There have been, as mentioned earlier, rocket attacks.

A separate rocket attack killed a Turkish soldier at a military base nearby, the Turkish defence ministry said.

Shortly before the drone in Erbil, at least two rockets landed on and near a base to the west of the city that hosts Turkish forces, Iraqi security officials said. That attack killed a Turkish soldier, Ankara said.

The Iran-backed militias oppose both the presence of the United States and Turkey and demand a full withdrawal of all foreign troops.

“I condemn in the strongest terms tonight’s terror attacks on Erbil International Airport and Turkish military base in Bashiqa, and I condemn the terror group behind them,” PM Barzani said. “These recent attacks are a blatant attempt to undermine our security at home and our cooperation with the global coalition.”

Yeah sure above all after 3 Goals:…Israeli ship, Turkey base, US airport of Erbil…

In the last attack the ship sustained minor damage only, because Iran knew very well what would be our response if it was a serious attack. So I’m not worried, there will come a time when we get ordered to raid an Iranian ship and kill every last one of them. if they want to keep their provocations, go ahead.

Sorry but Iran knows that Israel will never attack Iran country using his armed forces…only through terrorist payed by Mossad!…for other side Iran could attack Israel using houtti style vs Saudi Arabia…but with one diference….they can launch ballistic missile, cruise missile and long range drones during one month everyday targeting all israel industrial assets….

there is a big defference between “can do it” and actually do it. Israel is not the U.S, if Iran had bombed us with ballistic missiles like it had done to the American forces in Iraq, then it would have been an open war.

What can do Israel in a open war?…does Israel have air carrier?..does IDF huge cargo planes?….does assault ships?…

More than you think and I will not discuss it here.

Not to mention that nest of Mossad vipers in Erbil. Of course Israel denies it, as do the kurds…just like KSA says they shot down all of the Yemeni missiles/drones yesterday…those explosions on video were…uhhh….right. You just know when Lyin Zion and his ilk show up, they’re butt hurt. Oh, the joy!

Your soldiers will be targeted in Iraq, prepare the coffins, because fixed targets are the easiest to hit

and that explains the ridiculous weird doings of both erdogan and putin in respect to syria, jemen and ukraine.

Where are the powerful anti-aerial defenses of the North American occupant to defend its enormous erbil military base? The Yankees are trifler, everyone see their bluff, they will soon come back to their tents and to s**t on the sidewalks, no glorious epilogue for them.

Putin is collaborating with Erdogan and the Turks to commit GENOCIDE in Syria. Putin and the Russians have BLOCKED the application to the International Criminal Court (ICC) in order to prosecute the Turks’ horrible crimes against humanity and genocide which Turkey has committed in Afrin, Syria: https://www.genocidewatch.com/single-post/2020/06/08/Turkey-is-committing-war-crimes-and-crimes-against-humanity-in-Syria

No need to worry……big daddy Iran is watching the servant like mongol. They’ve long been cornered inside enclaves of death along with their jihadist hordes……very publicly bombed at will, at the slightest pretext, whenever Putin and Khamenei so desire.

Just killed a guppu soldier yesterday no?….lol…..many more injured too no?……Now before the Iraqi Hashd Shaabi spank that bubble butt of yours and all that mehmet come spilling out, its probably best you leave on your own no?

So no Mossad Center? khar

I’m waiting to see the cadaver proof no? just like you no?

I don’t buy it. Putin practically collaborated with the Turks to deliver the Armenian lands and inflicted 5000 dead and thousands more wounded on the Christian Armenians. (Yet Putin pretends to be the champion of Christianity.)

And your Iranians: the Mollahs said Karabakh is Azerbaijan; threatened to kill Armenians if some of their shells accidentally fell on the Iranian side close to the battle area. Plus, the Iranians committed fraud in collaboration with the Turkish State Banking system. The Turks are under investigation in the US due to their gold-swap deals with Iran in order to avoid US-imposed sanctions.

When I visited Turkey not too long ago, there were Iranians everywhere in the nicest spots of Istanbul.

Don’t you know that Iranians think Turks are cool? That’s my impression. Iranians look up to them.

No……no way….Iranians consider guppu people as servants. Only people Iranians like are Parsi’s. Nobody else. That’s where it stands.

Mustafa defending the Turks’ right to rape, torture and kill human beings because the Turks like that.

All big talking.. one carpet bombing and they all disappear job done Irani Shia Mullah

Your drones will be shot down

And we’ll sic the kurds on them too if they even make one wrong move. So far, thats the arrangement. Iran kills the jihadi Al-Qaeda, and they quietly take it…..as it comes.

We have SAM-358 to shoot it down, it can even neutralize a F-16 warplane

ok act now if you are serious. Be careful they can repeat Saudi Arabia scenario for your country, you know what is happening with Saudi Satania now? Not even S400 would defend you people

when the times come…we are not saudi . irani

“Kurdish minister Barzani condems both attacks”….He has sold that lands to the Ziocorporate Org ( USA-Turkey-Israel) despite Turks are targeting Kurds!..

What’s up with the IRGC? lol