A group of senior ISIS and al-Qaeda commanders was reportedly killed in a U.S. raid on the Abu Baker al-Baghdadi hideout in northwestern Syria, near the Turkish border.

Iraqi sources said that al-Baghdadi’s deputy in the ISIS leadership, Abu Said al-Iraqi, was killed in the raid along with Ghazwan al-Rawi, the personal bodyguard of the infamous terrorist, and Abu al-Yaman, head of ISIS security in Wilayat al-Sham (Syria).

Abu al-Yaman, a Syrian citizen, appeared in al-Baghdadi’s last video message, which was released on April 29. US forces, including eight helicopters carrying special forces. warplanes and drones reportedly conducted a “successful raid” on the al-Baghdadi hideout in the town of Barisha in northern Idlib. According to initial reports, al-Baghdadi blew himself up when he was approached by U.S. forces.

The infamous terrorist’s wife and child were reportedly killed in the course of the raid. The family of Abu Mohamad al-Halabi was also allegedly killed.

Al-Baghdad’s older son Huthaifah al-Badri was killed last year by the Syrian Arab Army (SAA) in the Homs desert in the heart of the country.

The death of al-Baghdadi is yet to be verified. U.S. President Donald is expected to confirm the news in a live statement a few hours from now.

lolololololololol…and Russia is protecting for months the terrorists in Idlib…lolololol
Simon said-….
Simon told u so….

zionists are laughing their asses off………… Donkey believers…..Monkey brainers……

Russia and USA are two sides of the same coin…controlled by Satanic zionism.

all nations that RECOGNIZE the illegal satanic Entity named Israel are part of the satanic Zionist Agenda.
A One World Government with Jerusalem as its capital under satanic jewish Leadership.
This includes Russia,usa,eu,uk,china etc….

I wont be surprized if Putin says he did it like when he claims it was Russia that won wwII .

Tonto is Ukrainian wannabe. He has no relationship with Canada.

Ah, old Solomon Krupacek … Who came from a former Soviet country in eastern Europe, hates Russia deeply and pretending to be a Canadian.

Don’t let the Jewish dominated Western media fool you, “it was the Red Army that tore the guts out of the Wehrmacht” — Winston Churchill

Isis is a very radical ideology, you can’t eliminate it by simply killing their leader. You kill one then another will appear. Actually the leader is just a symbol, the ideology is already embedded in the brains of each of its members. The west/CIA has created ISIS and now they wants to eliminate the evidence.

Rumour has it that an LGBT ISIS trannie from Saudi Arabia has been groomed for a year now as the Baghdadi replacement, by the CIA and Mossad.

Diversity in terrorism is a CIA Mission Statement by the way :)

‘Inclusivity’ is all the rage in the West.

so true. isn’t that funny, every clown they create has the same task, pretending to defend Islam even though it serves Israel’s interests. Israel even has a special hospital to treat wounded ISIS members.

Correct assertions. Killing the leaders of islamists organizations is certainly welcoming news for any sane person, however the effectiveness of the strategy is highly questionable. They are all replaced next day by another charismatic and influential leader and the the hunt for high valued targets starts all over again. Waste of time and resources.

I am thinking Russian strategy in this regard is a little more sensible. While they too endeavor to kill the high value targets given the opportunity, they have also recognized that going after the entire flock is a lot more rewarding. Putin very explicit and openly stated strategy is to kill in Syria all ( or as many as possible) from the Russian citizen’s (mostly from the Caucasus region) and from central Asian republics that went to Syria and fight for Islam, lest they come back to Russia or central Asia and create chaos and death( like they did Chechnya and Dagestan in the ’90).
Of course killing thousands and thousands of this scums is not so easy to sell to public as the killing of the high profile target, hence the Russians do their job quietly, 10-15 Islamist at a time (bomb)

I agree with your opinion. Russia’s strategy was more effective because Russia was in Syria really to eradicate terrorists. not pretend to fight terrorists like the American-led coalition did. 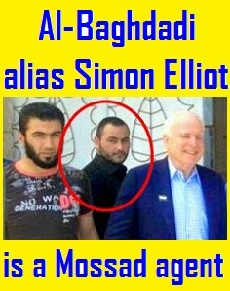 Just one question: Killed again??!!
I really don’t trust cowboys, zionists, banksters and other scum telling us about their version of truth.
More over, it seems Syrian air defense is full of holes up there in north or they had some agreement with cowboys to pass through??

Holy shit is that klove and light.

Yeah, right. Something in the story is very wrong here. The US has been repeatedly telling people the ISIS leader is here, there, blah blah blah. Russia said it one time; he was killed near Raqqa during a large meeting of commanders. This attack and ‘story’ surrounding it come as the US, especially President Trump, is in a pickle trying to remain relevant in Syria. A very large area under their control was just pulled out from under them and the ‘staying to protect the oil’ is coming under increasing pressure every single day. Russia just gutted their entire oil smuggling operation by airing all the details. I am not buying this pile of baloney.

So what is going to happen this time? IS the entire SF team going to get killed again in one fell swoop, like the SEAL team that supposedly killed you know who? Is the US miraculously going to determine, that with the death of X, Y and Z, we can truly leave Syria? I am looking forward to the next release of this comic strip. My take, I wish well to you all, even Jens.

I listened to Trump’s, ‘ Victory’ diatribe that contained a couple of questionable points.

1/ Baghadi detonated an ‘explosive belt that was the cause of death’.
I would question why any person would wear such a belt just in case assassins drop in.
It would be a constant risk and similar to living with a loaded gun strapped to ones head.
He was always filmed with firearms close by and it would have made more sense to shoot himself.

2/ Trump said the explosion in the tunnel caused a cave in that covered the remains.
This being the case, how were body samples mashed up with three of his ‘children’ taken AND analysed at warp speed?

Is Baghdadi now in Hell or Langly?

Exactly Florian. I am not buying any of this bullcrap.

Poor dude, he ran out of lives. How many times has he been killed? Oh, and he blew himself up too…so they only have pieces to do DNA tests on. Damn, I forgot they have facial recognition to prove it was him too. I thought the OBL fraud was bad, but c’mon. At least we have the US military to prove it was him, just like with OBL. HAHAHAHA. This is even worse than Trump’s idiot TV show. But, but, it was Iraqi Intel that was responsible for getting the info…and they passed it to their partners (Bagdadi’s controllers?) at the CIA. What’s wrong with this picture? Who’s directing this shit-show?

he is already transferred to israel . bombing is just to justify that Baghdadi is killed . but where is the body. and his companions body

“There will be a substantial reward for the one who finds al-Baghdadi and his henchmen. You are free to use any methods necessary, but I want them alive. No disintegration.”

Oops! Looks like there was a disintegration . . . Or maybe not.

“This deal is getting worse all the time”!

yeahh the prophetshitter baghdadi direct on the way to CALIPHELL :)

He was already dead when the copters delivered the body from Langley. Conveniently destroyed body means no autopsy.

Is that the new script for Bagdadi in this season of operation fuck all in Syria.

Surprisingly no Iraqi knows Al Baghdadi’s childhood… Nobody knows his house, parents and siblings…
But all of a sudden he appeared in Iraq, speaking fluent Arabic with Jordanian accent…
Could he be a MOSSAD Jew trained to change the geography of the ME.?
A failed project??

Surprisingly, I would think that any Israeli could have easily been trained to act the role :)

It was a great chance for Russian PR to get him, what a pity

F**k your “PR”, history will record; Putin and Russia, with the help of Iran and the brave fighting men of Hezbollah, saved Syria and its people.