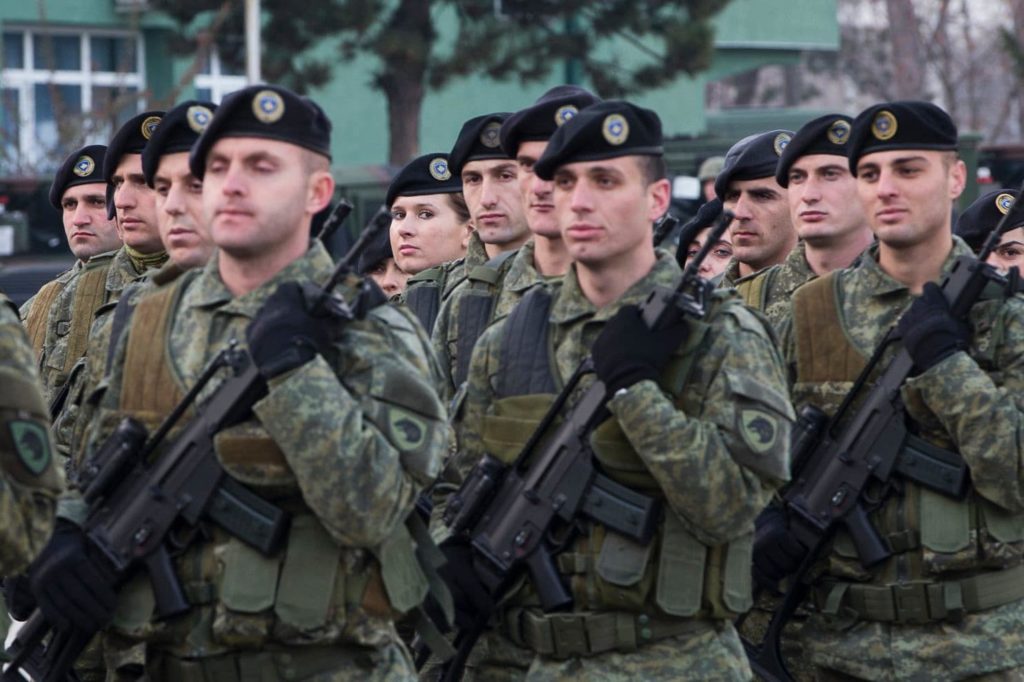 UPDATE: The Russian Foreign Ministry released a statement commeting on the sitaution. The Russian side described the decision to form the Kosovo Army as an apparent violation of the UN Security Council resolution 1244 and said that this move leads to a further escalation in the Balkans.

The foreign ministry also slammed the behavior of some NATO, US and EU politicians, who’d claimed that the creation of the Kosovo Army is not changing the core of the Kosovo Security Force. The minsitry pointed out that in fact the move will boost the number of Kosovo fighters by two times, lead to the creation of reserves and change the essence of the force. The Russian side noted that the US and NATO are acctively training Kosovo fighters and supplying them with weapons and equipment.

Kosovo “Prime Minister” Ramush Haradinaj, who has repeatedly threatened region with the resumption of hostilities, was described as an example of the failed Kosovo “statehood”. The foreign ministry concluded that Kosvo is a point instability in the Balkans and this tendency is developing.

On December 14, the Parliament of the self-proclaimed Republic of Kosovo overwhelmingly approved a decision to turn the existing 4,000-strong Kosovo Security Force into a regular army.

Serbian Prime Minister Ana Brnabic responded to this move by saying that that this development goes against efforts at stability in the volatile Balkans.

“Serbia will try to continue on the path of peace and stability, the road of prosperity.” Brnabic adds that “we should sit down and talk about building a better future,” she said. “Today is not the day that contributes to cooperation and stability in the region.”

Serbia doesn’t recognize Kosovo’s 2008 declaration of independence. The state has been opposed to the formation of the Kosovo Army for a long time. The main reaosn is that this entity would threaten the Serbs living in the area.

On the other hand, the US supported the creation of the Kosovo Army and reaffirmed “its support for the gradual transition … to a force with a territorial defense mandate, as is Kosovo’s sovereign right.”

NATO secretary-general Jens Stoltenberg said that the decision to start the formation of the army “was made despite the concerns expressed by NATO.”

“The transition of the Kosovo Security Force is in principle a matter for Kosovo to decide, we have made clear that this move is ill-timed,” he said.

He further called on both the self-proclaimed Republic of Kosov and Serbia “to remain calm and refrain from any statements or actions which may lead to escalation.”

Experts expect that the formation of the Kosovo Army will contribute to the further growth of tensions in the region and may escalate the situation in the Balkans in general.

Serbian army can overrun Kosovo in week or two. So this move is might give pretext to start minor conflict turning into a big one with domino effect. Insane move.

No, there is no change. If serbs will be bombarded again like last time, itts fine with me.

Nothing wrong making an army in stead of milisias. Those hardly are for atacking the famatics in Serbia even some should be jailed and kept there as they did with muslims themselves. Timesoares and other camps are very good examples.

But of course serbs like fx turks and assads prefare to attack unarmed and make themselves respected heroes by that.

Jens, you are fine with this? https://www.youtube.com/watch?v=YjUvZo_pouI

Thats what serbish fanatic nationalist are able to relate to. No more talk.

I have followe tht Tito collapse well all the way as well as Balkan war 1+2 and the start of WW1 and the dirty things at WW2.

NO MORE TALK. Same goes for the Tudjman nazis.

Thank you for your support Carl.

I also had a muslim college, which as child left Bosansky Brod after heavy bombardments by Serbs by tanks and artillery.

Those many refugees were first stripped for all they had as a plunderer can use for anything. Then they having riffles in their noses were threatnt never to come back.

So any picture from there only say. We should never allow agressors of that kind deny people to choose, whos should be their leaders. never.

The agressors were Serbs and Croats and they also killed and deported and raped so many others fx i You probatly belowed Kosovo. The Kosova Albans did a little of that too.

But of course You have forgotten all public emploed of theres were fired and theat included schools and a small university. No wonder people are angry.

And as seen in calenders – its not the first time.

Are you claiming your origins are ex-Yugoslav Bosnian muslim?

Actually, it is the Albanian Kosovar militias and ‘police’ that have for years regularly attacked the Serb enclaves in north and south – with sniper and mortar harassment. The Serbs return fire defensively – against Albanian militias that approach and attempt to enter Serb enclaves to attack.

I wonder why. In 1913 Serbs took all Macedonia having not a single serb there too.

No, its not. Its about the reasons for it.

Same thing for serbs, by the way isnt it: If You join serbs, then go to Serbia.

You as the the good serb lover You are, of course try to indicate serbs always was many, many in Kosovo as well as Albany always was a tiny country like now.

Not even th other slaves in the whole region will join You unless they are forced to by You. Why should the locals in Kosova.

You even took macedonia having not a single Serb. You also ignore, You made 1 million Alabanians leave to Albania and have very big local deprtations Yourself fx at WW1 well documented by the Serbian army.

That mainly was moving Albians from both Morava Valleys and move in Serbs.

Kosovo is in Serbia – relatively few countries accept the unilateral succession by ex-KLA terrorists in Pristina, that has no international legal foundation – it is entirely predicated on US military force.

You can call me Al
Reply to  viktor ziv

For me the 25,000 Serbians living there would do the trick alone – God willing.

That’s probably the most retarded thing I’ve heard. Do you really believe if Serbia declared war on Kosovo, it would just be Kosovo vs. Serbia? What a fucking dumbass you are.

No it be serbia the russians and all of us. As for the dumb ass remark the one who take the prize on that is the one who did not jerk you off.

What about people who don’t want any war, does anyone care about their opinion? It seems that only the sad and self-hating minority matters.

what about the other people? We did not started this but we will finish it. If you dont care for war and in reality none of us care, for war, until is been forced on us, find a hole and stay there until the dust is settle.

I see that you are very brave on the internet, hell yeah, go out and finish this “war” with your keyboard and mouse.

what is the matter kid? Your brain is not able to answer and now you going to insult someone you know nothing of him or his life?

How turkish of you. Is the poor in your avatar referring to your poor mental state?

No, but basically when you call someone a kid, you have already lost there.I am not sure what insulted you there in my last comment. Just end this war, as you said, lol.

I was referring to the quality of your brain not your age. Give some thinking in what may have insulted me and you figure it out.

Dang it, I feel so humiliated now. You win.

not my intention. just trying to activate a second cell between your ears, so your single cell it will not be so lonely.

I think you have succeeded so far, now I have 2 cells. Big thanks. 2 cells is enough to think like you?

no kid… but it be an improvement to the way you think.

nope none wins. But remember you started it.

It will be hard to remember anything with only 2 cells.

Found the kid who hates geography

Take a peek to former republic Macedonia. Take a peek to NATO member Montenegro. Both countries are having problems because of Kosovo. I do respect Albanians. War resolves nothing, just brings more problem. This is stupid move, period. My friends in Tirana don’t want to go to war because of Kosovo. You think they will. Serbs didn’t shoot down only F-117 back in ’99. You’d be surprised how many NATO planes never got back.