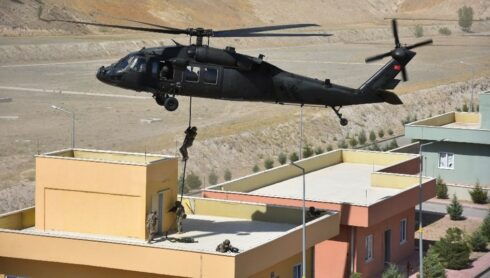 The memo, submitted to then-Chief of General Staff Hulusi Akar, now the defense minister, in June 2016 made a detailed assessment of Turkey’s engagement in training the Ukrainian military. The memo was prepared to comply with Akar’s orders of May 27, 2016 in which he asked for conclusions after a military team returned from a coordination and assessment visit to Ukraine.

The Turkish military sent a special team to Ukraine composed of representatives of various forces to make an assessment on how to coordinate joint military training. The visit took place April 6-10, 2016.

According to the memo ÖKK’s engagement with Ukrainian troops covered the training of Ukrainian special forces by the ÖKK teams, starting with a program in Turkey. Kyiv asked Turkey to send two officers at the rank of colonel or major for language training in Ukraine, a request that was approved by the Turkish General Staff in 2016. 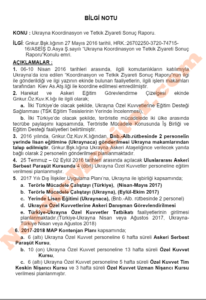 Turkey also gave the green light for hosting and training about a dozen Ukrainian special force members in weeks-long sharp-shooting and sniper courses as well as free fall parachuting and other special force capabilities until 2018.

The memo also covered the assignment of special military advisors from the Turkish army to train and advise the Ukrainian military. Joint military exercises between the special forces of both countries were planned for 2018.

The 2016 plan was later expanded to include more troops and involved the land, air and naval forces as well. 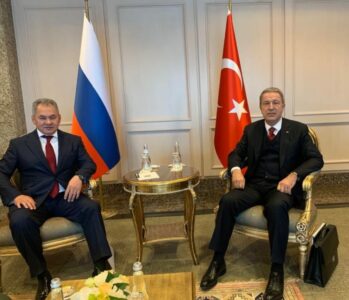 Turkey and Ukraine have recently signed several agreements to increase cooperation in the economic and military fields. The latest Framework Agreement on Military Cooperation, signed by Turkish Defense Minister Akar and his then-counterpart, Andrii Taaran, in October 2020, allows Ukrainian military personnel to receive training in Turkey or vice versa.

Russia is apparently bothered by the military cooperation between Turkey and Ukraine. In April 2021 Russia warned Turkey against Ankara’s efforts to boost cooperation with Kyiv. In an interview with the Argumenty i Fakty newspaper, Russian Foreign Minister Sergey Lavrov said, “We strongly recommend that our Turkish colleagues carefully analyze the situation and stop fueling Kyiv’s militaristic sentiment,” which could be interpreted as a threat. “We hope Ankara will adjust its line based on our legitimate concerns,” he added. 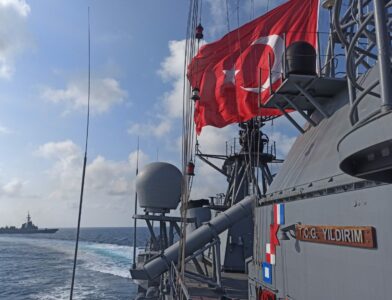 In response Turkey accused Russia of arming anti-Turkish groups. Answering questions from lawmakers in the parliamentary Planning and Budget Committee on November 4, 2021, Foreign Minister Mevlüt Çavuşoğlu said Turkey encounters Russian-made arms in its fight against hostile groups in various places and defended the sale of drones to Ukraine.

“We say that after a country buys it [a drone], it can use it however it wants. It can also be bought from another country. We also come across Russian weapons in various places. I destroy them, I destroy or seize them when I come across them,” he said.

Çavuşoğlu was referring to Russian arms found in the hands of anti-Turkey groups ranging from the Kurdistan Workers’ Party (PKK) to the Libyan National Army (LNA) and Armenian militia in Nagorno-Karabakh.

Given the fact how miserable Turkey failed in Syria and Iraq this training will be highly counterproductive.

The Ausisistralian Army has begun forcefully transferring suspected covid cases via trucks to concentration camps. Other residents are under a total lockdown in the Northern Territory, they cant even go out to buy groceries or fuel. You guys may look into it…

@Lone Ranger, This wont be widely reported due to 5eyes. It one of the most serious esculations towards concentration camps and open genocide I have seen in the west since ww2. Serious and scary stuff, and yes Soutfront should look into it.

Maybe You should wonder why so many want to go there too.

Many has condemmed those conditions very much.

Many could tell about it, but its already very well descriebed and condemmed.

The NT has one of the lowest case numbers of covid in Australia. Your comment sounds like bullsh*t . Total lockdown ???? where did you get this from. your arse because that’s what it looks like to me.

Truth hurts, try to handle it…

Truth dragged out of your arse. Why not pick on a state that has several hundred cases a day instead of one that has had less than 300 in TOTAL of the entire period. Now you can say but the covid cases were fed to the crocodiles to keep the cases low. Tell bullshit once , never believe another word you say as now NO CREDIBILITY> .. BULLSHIT.

What is that a link too. A little pic of a G .. Now it is abbo’s you are talking about that are out in the middle of the wop’s . Yeah right .. pull the other one. The Guardian that has a left bias is the most trusted news site after the BBC. Joke.

Binjari and nearby Rockhole have been placed into strict lockdown in response to the outbreak, and the Australian defence force has been called in to help with transferring positive cases and close contacts. Have you any idea what these communities are like . No not a f’ing clue.

You turn that into secretly taking these people into concentration camps a la NZAI Germany and pretending they will be disappeared. One one day you decry the bullshit MSN and then you manipulate the truth to fit your agenda which is no better than the billshit you decry. As I said … BULLSHIT.

They are testing the grounds on aboriginals, to see with how much they can get away with.

And the Abbo’s would be screaming blue murder to every agency that listens.. It would be splashed across every news site in 5 minutes either to disparage or support their claims. Mate you are full of it.

Thats right. People like You should not be allowed here alone. You need a caretaker or a service dog.

I can only hope that all world leaders, doctors, nurses, media trolls, or other public figures will meet the same treatment and judgement as nazis and collaborators faced after the war at the Nürnberg trials. Traitors you are on notice…

@ Lone Ranger, We will have to win the war for that to happen, and so far most nations peoples have lost many of the key battles in the war without a fight. From the exemples set by people in the area I live I dont hold much hope that we will easily win this, especially without the logistic, financial, and political backing of another state level player. The soft-kill jab will only accellerate the destruction of 5eyes countries. The Deagel projection of 90% of US, UK, and European people dead or gone by 2025 now seems qute reasonable. Good luck to you though, I like the way you see things.

I have to agree with you. Still, never give up, never surrender. Good luck bro.

Whales and elephans most likely are brighter then You too.

Sounds a bit stupid of Erdogan to be sticking Putin’s fingers in the fire.. He might end up getting shoved into an oven without the gas first.

Several others also for own try to open up for things too.

Er Dog, the irridentist Turkish wannabe sultan, is Uncle Shlomo’s b*tch! He likes doing their dirty work for them so they can give him some canine goodies like the little poodle he is.