After hitting targets in the Syrian provinces of Deir Ezzor, Homs and al-Suwayda, the Israeli Air Force conducted a second wave of airstrikes on the province of Hama. 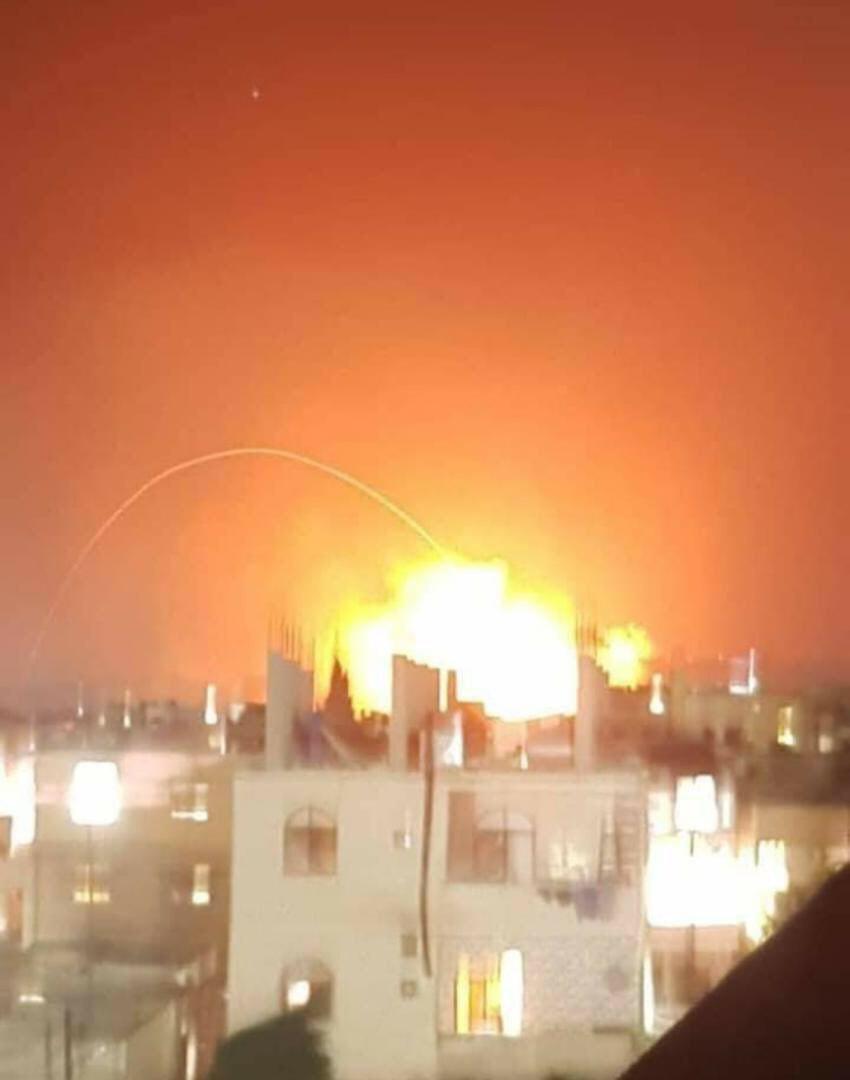 According to Syria’s state media, the strikes hit Salamyieh and al-Sabboura in the province of Hama.

“The source added that immediately after discovering the missiles, the army air defenses targeted them and downed a number of them before reaching their targets as they only caused material damage,” SANA writes.

The most dangerous and barbaric rogue state is once again proving those of us who detest them how right we are to do so.

Putin is fully complicit is the partition of Syria and Israeli strikes which are becoming a regular feature.

Of course, Israel incorm Russians with 30 mins before so any Russian personel can evacuate. Most probably Iranians and Syrians are informed by Russians so only equipment gets damaged. Honestly if I’d be Russian I wouldn’t try to stop this.

It is the USA and NATO who are trying to partition Syria, Russia is there to stop them.

You don’t find the Syrian people blocking Russian military patrols, as they regularly do when US forces venture outside of their Al Tanf illegally held base.

Putin gave away Idlib to Turkey and Russians normally avoid Americans in Syria, since they are weak.

Idlib hasn’t been given away, and Russian troops are building bases surrounding Al Tanf, where US forces are holed up. Cowardly US troops use ISIS to do their fighting ffs. The Yanks will run from Syria, just like they ran out of Vietnam.

Any Russian living in Israel is not a Russian,its that simple,i wish Putin would see it that way,maybe he does.

The “book” has nothing to do with what is going on except the fact that what is going on is in stark enmity with the book. And just as they falsely claim they follow the “book” so is your claim that the “book” is bullshit. Perhaps if you knew the “book” and what it truly teaches then you wouldn’t be like those who you speak of.

Yes i can’t understand why this has not happened a long time agothe gangsters will continue until they are taught a lesson,Syria and Hezbollah should hit israel with some ballistic missiles.

They should? lol. They know better than you why not to do it.

Syria is being provoked via Lebanon and if Lebanon retaliates then the israelis have an excuse to involve the US which would be detrimental to the ME. israel will eventually be countered but when the US/NATO machinery has been significantly weakened. The tactics used by the israelis is very similar to what the Germans used prior to WW2 and the UK/France/US were the major instigators that started WW2. Russia, China, Iran with their allies appear to try and avoid a repetition that started WW2.

This constant massacre on young Syrian servicemen has been going on since 2015.

200 Israeli bomb-strikes per year on Syrian territory, everybody are just looking the other way pretending they dont happen. 1000’s of US/European trucks convoys constantly driving through Syrian area loaded with modern arms, new Toyotas, quality uniforms and Takfiri psychopaths, and everybody busy with their personal “leverage and influence”.

Don’t get too hot under the collar, every Israeli strike in Syria brings their final demise closer. America, Israel’s moronic protector, is goosed, bankrupt and falling apart, soon there’ll be no protection and by 2030 Israel will only be a bad memory. They are self-destructing under enormous waves of bloodlust and genocidal murder and the world can now see through their pernicious lies of holocaust and choosen people…..

The problem is the lies are not lies.

Its also not lies that Jews have been exposed to persecution, holocaust, discimination, racism, anti-semitism, progromes. It is documented. The six million is not the only figure manipulated, the Russian deads, and the Allies sufferings are also lies.

What you can blame the Jews for, and what the Jews always avoid to talk about, and what is the real reason why the Jews have been hated and dispised during all time, is usury.

Usury is forbidden in almost every religion and philosophy because it destroy civilisation from within. Usury is allowed in the Torah against foreigners.

The israelis are the only ones who believe that they are the chosen people; one can’t see how considering that they were responsible for the crucifixion of Christ and the betrayal to God by worshipping an idol while Moses was being delivered the 10 Commandments. According to the scriptures the israelites were punished by God and Moses was destined not to see the promised land. I am not religious nor have read the Bible so I may have a few facts distorted. israelis are the Cursed race; definitely not the Chosen people.

Israel is the chosen but not the fake Israel we see today. You are right that they lost that first covenant, through disobedience and have no right to that land any more. What you see over there now is the synagogue of satan, a usurper who in time will be destroyed by the will of God.

Wishful thinking. The U.S. and the fake Israel will not just self destruct. Or if they do they will take everyone else with them. Also if they did just cease to exist that doesn’t mean the world would be a utopia. It would just mean a changing of the evil guard as some other entity would take their place.

Israel has been doing this for years under the guise of self defence yet the only one ever being aggressive is them. Where has Israel been attacked by Syria or Irans militias.

Why even report on this any more. It’s the same as reporting that he sun comes up in the east. I mean it’s just about as common now and there is apparently no desire to change it.

In the picture it looks like it was hit by a surface to surface missile.

More and more I believe that Russia went into Syria after making a deal with Israel and the US to act as a counter-balance to Iran and Hizbullah. In other words Putin was going to make sure that Iran and Hizbullah won’t come close to Israel, all the while pretending to be a fair and honest mediator and propagating that he is a Savior of Syria. Putin succeeded in negotiations with Iran to withdraw Iranians about 150km away from Golan Heights. Putin fooled everyone. I used to believe in him at the beginning. He finally lost his “nice guy/hero” mask, when Israel shot down the Russian plane, killing 15 service members of the Russian army. Putin said that it was an unfortunate chain of events and said nothing against Israel. Also remember Putin calling Netanyahu for the victory day celebrations and walking with him at the march of the immortals. What a disgrace.

Very astute observations. Let me add that Russia’s other mission in Syria was to prevent the Jihadis from actually winning and establishing a ” caliphate ” right near the Golan and Lebanon. This was always a ” no go ” for all sides as the Jihadis purpose is to damage and destroy the targeted nations, not to actually achieve victory. If one looks at the Syrian fiasco from that view it all starts to make sense.

I may be completely wrong but Israel’s easy bombings in Syria raises lots of questions. Some may call it a conspiracy theory but one scenario could be as follows. ISIS was a western/zionist intelligence operation. That much is clear. There are even pictures on the internet the infamous Senator McCain sitting with the head of the terrorist organization. It was probably a very smart two stage operation and at the same time also forced Russia to intervene much more easily. It gave Russia a pretext but also prevented ISIS to become a threat and spread across Russian Muslim provinces in the future (West used Islamist terrorists in Chechnya and elsewhere with success before). So in a way, it was used kind of a bait and stick to force Russian involvement. The ragged, irregular ISIS could have never defeated Iran and Hizbullah in Syria. And I don’t believe that Syria was on the verge of collapse during 2015. Russia was used to do the dirty job and in return they allowed Russia to use the Khmeimim airbase in Syria and may be some other deals, may be not interfering with Russian gas pipeline projects. Not one single western country, Nato and Israel made any fuss about Russians being in Syria. This is odd too. Israel is the beneficiary again. They have the powerful Russian military to prevent Iran and Hizbullah to approach Israel, but now they also cooperate with Russia to liquidate selected targets with ease (I have read somewhere that Russia provided Russian made Iranian missile codes and military installation coordinates to Israel). Really brilliant on Israel’s part. They fooled the entire world again and Mr. Putin became a hero in the eyes of clueless Russians to secure another term in the office.

Putin was always only a bog liar. The russian policy is for 300 years about lying. Russai betrayed all allied coutries in warsaw pact, plus vietnam. cuba, angola, nicaragua.

Russian policy also betrayed Che Guevara in Bolivia. Che wanted to open up to China instead of Soviets. Fidel Castro kicked him out of Cuba. He went to Bolivia and killed there by the US intelligence. Soviets made sure that the Bolivian communists would not help Che. Soviet Russia hated Che, as he criticized openly the luxury living of the communist elites.

What a great night it was last night, I hope it happens more often!