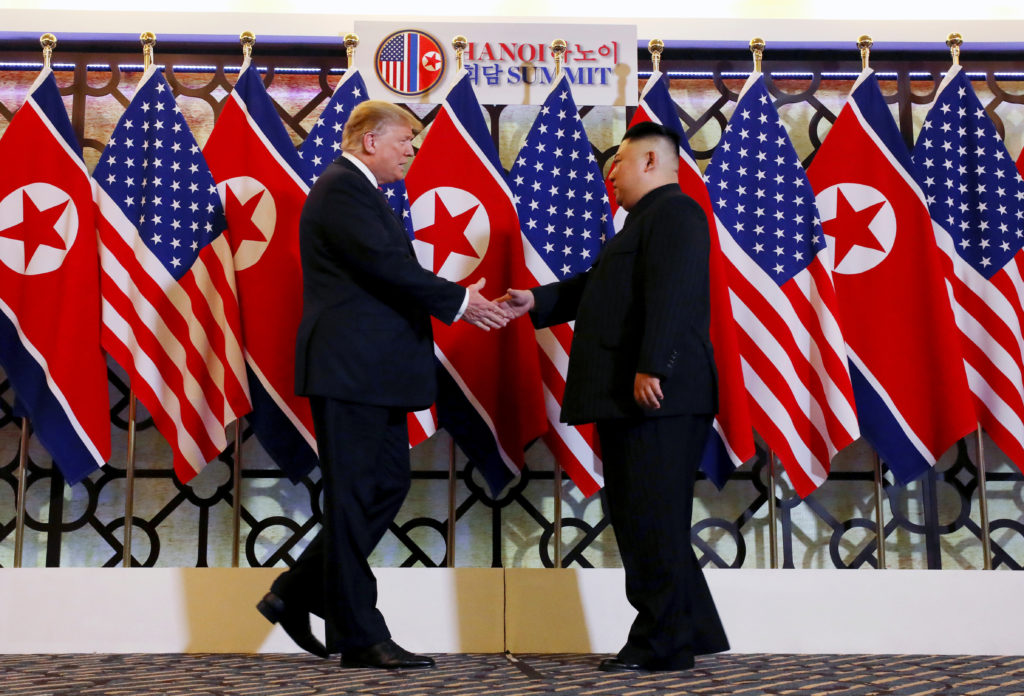 On February 28th, the second Trump-Kim summit ended with no nuclear agreement.

“No agreement was reached at this time, but their respective teams look forward to meeting in the future,” the statement read. “The two leaders discussed various ways to advance denuclearization and economic driven concepts.”

US President Donald Trump flew back to the US.

North Korean leader Kim Jong-un remains in Vietnam, where he is due to begin his official visit to the country on March 1st. He is also planned to meet Chinese President Xi Jinping along the way back to North Korea.

The table was set and food prepared for a working Trump-Kim lunch that now won’t happen. pic.twitter.com/0CMDpgIYBw

Trump’s press conference was brought forward by two hours, replacing what should have been a signing ceremony attended by both leaders.

No deals were signed.

President @realDonaldTrump and @SecPompeo participate in a Press Conference in Hanoi, Vietnam, on February 28, 2019. pic.twitter.com/qgKX4cbuMd

Trump’s main phrase to sum up the conference was: “Sometimes you have to walk.” He said he remained optimistic for further progress in the future.

The major disagreement was over the lifting of sanctions. Kim is willing to dismantle the Yongbyon nuclear facility, says Trump, but wanted all sanctions lifted first, which Trump said he wasn’t willing to do.

Trump promised to phone South Korean President Moon Jae-in on his way back to the US, and also to brief Japanese Prime Minister Shinzo Abe on the failed talks.

Trump insisted that he and Kim left the talks in a “friendly” spirit. Despite there being no future summits planned, negotiations would continue between the US and North Korean teams and he hoped he and Kim would meet again. “It might be soon. It might not be for a long time.”

Regarding a third summit, Trump had the following to say:

“I gave that up quite a while ago because it costs us $100 million to do it. I hated to see it. I thought it was unfair,” Trump said, saying South Korea should shoulder more of the costs. “Exercising is fun and it’s nice they play their war games. I’m not saying its not necessary. On some levels it is. On other levels it’s not.”

“It is regrettable that President Donald Trump and Chairman Kim Jong Un were unable to reach complete agreement at their summit today. However, it seems clear that they have made more meaningful progress than at any time prior.

We note that the two leaders have expanded the scope and depth of their understanding of each other’s positions through in-depth and long discussions.

In particular, President Trump’s expressed commitment to continuing talks and optimistic views brighten the prospects for another summit.

The fact that President Trump unveiled his intentions to lift or alleviate the sanctions on North Korea in accordance with its denuclearization measures shows that the discussions between North Korea and the United States have been raised to a new level.

We hope that the United States and North Korea will continue to have active dialogues on various levels going forward on the basis of the discussion results from this summit.

The Korean Government will do all it can to ensure that the United States and North Korea can maintain momentum for dialogue while continuing their close communication and cooperation.”

The Guardian cited experts, according to whom if the sanctions on North Korea were always the “make or break” of the nuclear agreement, this should have been obvious to the US before organizing a very public summit.

Well, if that was the offer, then yes, you have to walk. (But shouldn't we have known that this was the offer before organizing a second presidential summit?) https://t.co/Ql40WEfR90

One critical qu from the Hanoi no deal – why didn’t negotiators see this coming? Traditionally leaders only meet when most details in a deal are agreed, signing off the last few bits. Raises big questions about the whole US approach.

The failed talks are possibly a notable setback, since they also freeze South Korean hopes of progress in terms of economy with the North. It also may push Kim Jong-un to seek a stronger relationship with China.

Why be a diplomat when you can be a bully?

North Korea will not, and cannot give up ist nuclear arms for a simple reason……. study the Korea war and how the U.S. Military conducted itself 1. 98% of all Buildings were destroyed 2. the U.S. Forces used BIOLOGICAL WEAPONS including smallpox,plague,

add to this the MURDER of Saddam hussein and Gaddafi…………no way they will ever give up their nuclear arms….not for 100 Billion not for a Trillion….period…

It would be the equivalent of signing their death warrant. A capitulation

Also remember that the publicity whore that commanded the US-led United Nations Forces Command during the war (1950-53) and was also run out of the US colony of the Philippines during World War II by the Japanese – US Army General Douglas MacArthur – considered using atomic bombs after China fought the UN to a standstill. So possessing nuclear weapons is one asset a country considered to be an enemy by the demented, deranged and evil freaks who conduct US foreign policy must have to avoid being another Yugoslavia, Afghanistan, Iraq, Libya or Syria. Yes the DPRK is a very poor country but it is heavily armed, clever and not suicidal when negotiating with the Washington, DC morons.

Kim got a chance to watch ‘outside’ TV in his hotel and realized what the US was doing in Venezuela. His first thought must have been, “They wouldn’t be f’king with the Venezuelans if Maduro had nukes capable of reaching the US.” He was also thinking that he shouldn’t let his sister cut his hair anymore, but that was unrelated to the talks.

“The fact that President Trump unveiled his intentions to lift or alleviate the sanctions on North Korea in accordance with its denuclearization measures shows that the discussions between North Korea and the United States have been raised to a new level.” Gee, I thought that this is where Clinton was back in the ’90s. Wasn’t it Bush and even private citizen Trump back then saying that it was a strategy of appeasement? This disconnect of a summit was expected, as this is the true ability of Trump to negotiate. Just because you did all your business with corrupt officials and mafioso’s, then built this phony ultra-business man persona for public consumption as part of your facade, don’t start believing your own PR. The fact that a deal could be made overnight by ceasing the war games off the N.K. coast seems to be forgotten by the media as well as the CONgress. That such events instigate N.K. to strive to protect itself seem to be verboten to remind the public of. The fact is that Trump (and US warhawks) were taken by surprise when Kim initially welcomed peace moves and suspended his research and missile tests. When Trump followed with a promise to cease wargames, peace accidentally nearly broke out. This was however quickly remedied by the military when they reminded Trump of all the money they would lose if the US ended up leaving S Korea. War games were to continue and (as expected) negotiations fell apart. Now this summit that wasn’t. Peace with NK is very possible and desired by them…but the US military/MIC must have it’s whipping boy/evil doer to oppose, lest they become unnecessary.

kim is too smart to surrender to the morons and wouldn’t abandon his nukes if his life depended on them.the amazing thing is that donny, after all, has managed to get kim to a table to talk but any progress is killed by the superdeepstaters fatso and bedbugcrazy and their ilk.

and kim will be fully aware of how the morons went berserk in the early 50s when his grandfather refused to accept syng man rhee as head of the korean peninsula. berserk like I suppose bedbugcrazy bolton can get when he won’t get what he wants.

The official statement “no agreement reached” does not mean Kim and Trump do not have some kind of understanding. They might think it safer to stay quiet for now so that the MIC-run deep state cannot shred it immediately.

This the exact approach that Ayatollah Khamenei and Iranian officials call “negotiating for the sake of negotiation”, not to get results. The US government wants it all is not willing to give something in return. They clearly knew in advance what NK wants and what it will give for that. In this case what they want is not denuclearization of Koreas.

It seems Trump and his team (or handlers, whatever) had 2 goals for this summit: First to show they are negotiating and pretend everything they do is not limited to threats of annihilation, sanctions, attack, regime change and breach of treaties, and second to prevent North Korea and South Korea from making real progress and god forbid, making peace.

United States does not want peace in the Korean peninsula. With peace, they’ll lose their excuse to have ABM systems and perhaps IRBMs which in reality are intended for China and Russia.

Bolton made sure the talks would fail by inserting a last minute additional demand that NK provides a list of chem/bio weapons it has, in addition to the ludicrous demand that NK denuclearises BEFORE any sanctions are lifted.

in US hubris, delusional and exceptional mindset, unconditional surrender to US corporate power, theft and hegemony is the only acceptable act of any country….even close allies.

Given the provisional nature of sanctions, it would have been better to lift sanctions and put a time requirement for its reapplication, just as a show of good faith and to jump start the peace process.