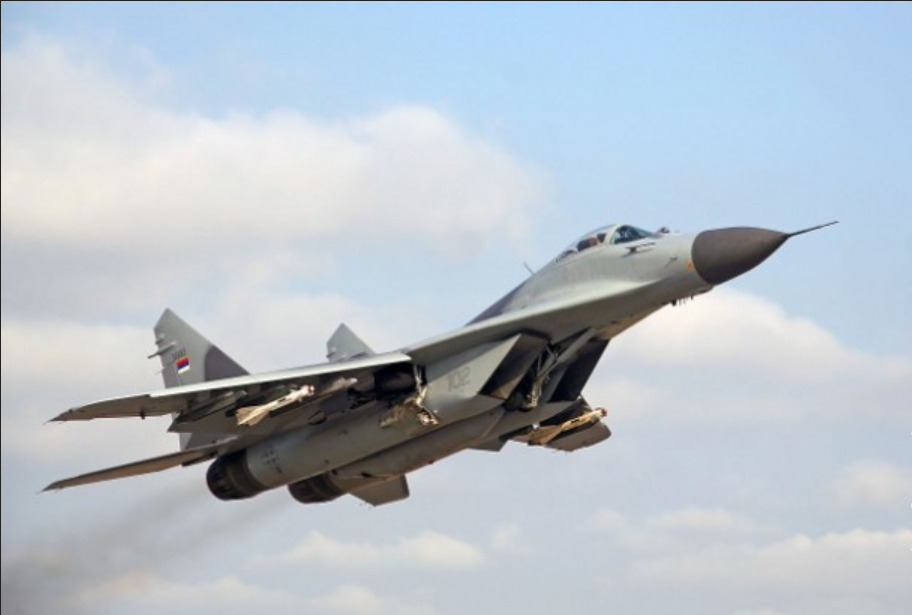 On August 18, a MiG-29 fighter jet crashed in the Astrakhan region in Russia. The pilot was killed as a result of the accident during a training flight.

The information was confirmed by the press service of the Southern Military District.

“The aircraft crashed in a deserted area on the territory of the Ashuluk training ground. The flight was carried out without ammunition load, ” the military department reported.

The reason of the crash are still unknown. A commission of the Main Command of the Russian Aerospace Forces is working on the scene. 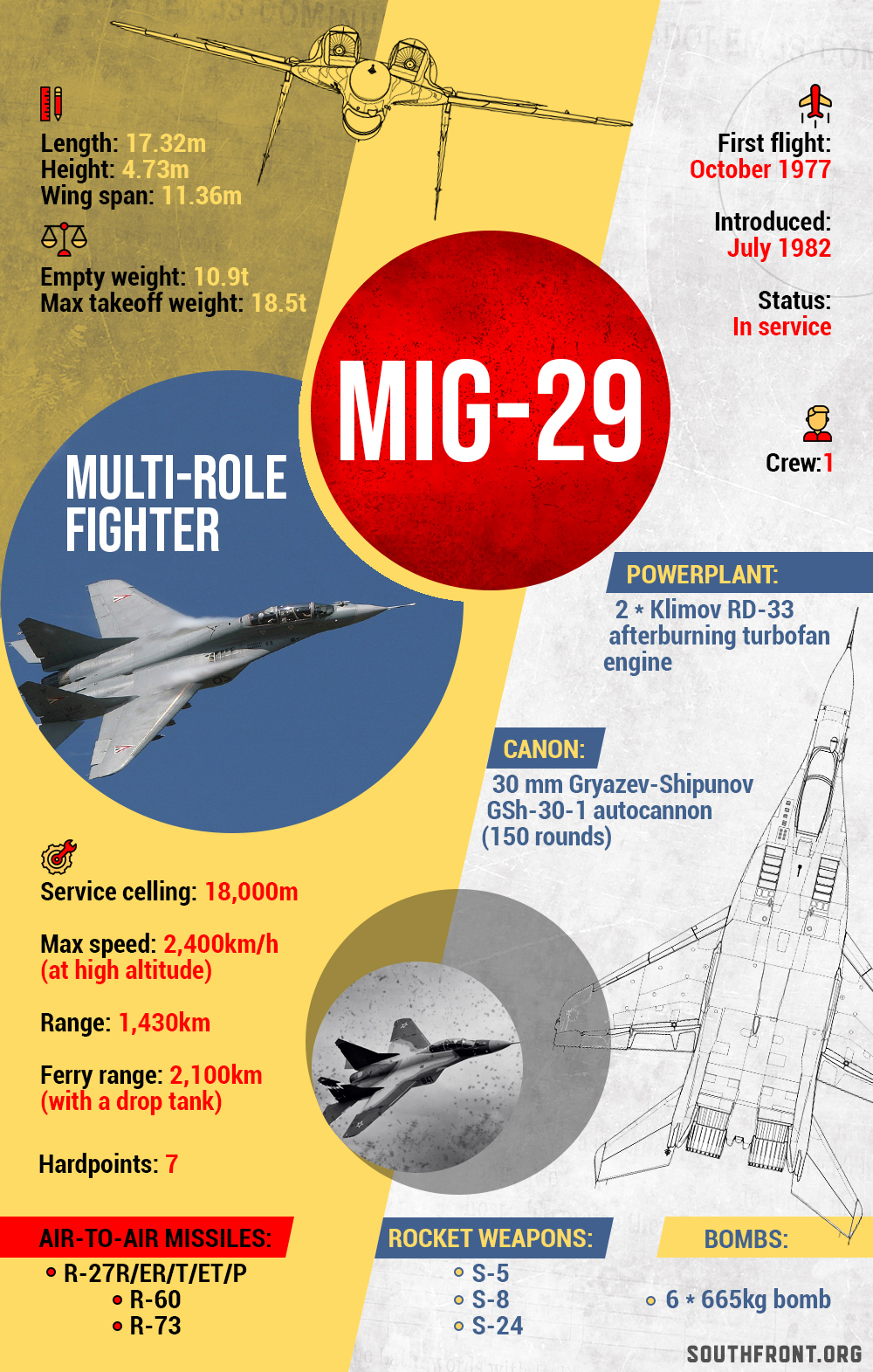 Recently, there was a series of fatal accidents with Russian aircraft.

On August 17th, the only flight model of the Il-112V military transport aircraft crashed in the Moscow region, killing three prominent pilots.

On August 14, a Russian military water bomber plane crashed with eight people on board, while extinguishing wildfire in southern Turkey.

On August 12, a civilian Mi-8 helicopter crashed in Russia’s far east. It plunged into a deep volcanic crater Kuril lake on the Kamchatka Peninsula during a tourist flight.

RIP sir, your service will be missed.

No need for enemy. Russian equipment is its own enemy.

Its not what al nusrah says when they see a su24 bearing down on them. It dont have to be pretty, it just needs to work.

Yes like the Russian T-34 tank in the war that totally trashed the Nazis.

No need for enemy. U S equipment is its own enemy. V22 Flop-35 F4 Craptors Crashawks… Oy vey…

The original MiG-29 design is younger than the F-16 design! But point you make about age relates to issue of air frames. MiG-29 air frames have overall relatively short life span – measured in flight hours – by design. The Soviet 1980’s doctrine for MiG-29 was to build them very light and maneuverable, with aluminum frames, and build lot of them. With assumption they would either build a lot more later on, or design a newer air-frame if needed in arms race with US, based around a roughly ten year service cycle. Events altered all this as Soviet Union ceased to exist. But as it happened the MiG-29 is a great design, that stood test of time, capable of repeated major upgrade cycles. Plus, as far back as 1983 it had the advanced, integrated, helmet mounted monocle sight for the vector controlled Archer AA11missile. Able to be directed at where pilot’s eye was looking, without need to turn entire aircraft toward target. But the legacy of the Soviet doctrine comes with a core caveat – respecting the life cycle of this air frame. That doctrine means, don’t gratuitously over use them, or use them for wrong purposes, and replace them when reach their full fatigue in the aluminum frame. Notably, this is reason why very rarely seen Syrians use their fleet of export grade model MiG-29’s over course of Syrian conflict. As using an air to air interceptor for counter insurgency, ground attack, would be waste of a valuable asset – putting expensive maintenance time on the jet, and degrading its air frame, in a role it was neither designed for, nor efficient with. All of that said, training accidents happen surprisingly regularly in all military air forces, and in this instance losing both the pilot and air frame is obviously the worst possible case scenario. May the lost serviceman RIP.

MiG-29 was initially designed as a frontline fighter (Su-27 is the interceptor counterpart), with the capability to operate from minimally prepared runways (unlike pindo pebble-on-the-runway shy junk), and relatively short combat range. Later it also acquired ground-attack capabilities (those have nothing to do with the airframe, which is good enough for carrier operation – K variant).

There is only so much money to go around. Nobody is allowed to irritate Putin’s oligarchs whether they be in pharmaceuticals, mining, oil, forestry, construction, communications, defence or any other business and ask them to pay their fair share in taxes for they are under western sanctions and instead of making 20-30 billions a year their profits are “only” in low tens of billions. Putin also needs money to support Yeltsin’s Centres every year to save them from bankruptcy as well as to insure that Yeltsin’s family (Yeltsins and Yumashevs) regularly get their profits from the ill gained shares. On the other hand poor and destitute Russians (monthly minimum is set below $200) can’t give more anyways. So, we have the military equipment and its maintenance neglected, the pilots are expendable, soldiers, officers etc. too. The space industry is lagging big time behind both Chinese and Americans, all major industries are infested with foreign spies for scientists know how little they are payed and how little freedom they have compared to their counterparts in other countries. The whole system is rotting under the rule of the former communists, who themselves seem to be very confused and unable to conceive of any new and progressive ideas and yet they seem to be hell bent on staying in power forever. Why would anyone risk their lives for such an unjust and fossilized country.

SBU are FAGS
Reply to  Mickey

You are mixing up Russia with the U.S. and Ukropisstan Shlomo. Its the U.S. that is lacking behind not Russia and China. Russia and China are already in the hypersonic era while the U.S. still doesn’t have supersonic… Meanwhile Russia is delivering them the rocketengines lol. Silicon valley is run by Russians, Chinese and Indians…

SBU are FAGS
Reply to  Mickey

Its the U.S. that is toast, with 27 tent cities across the country, no healthcare, only $72,000 debt per Capita… 100million people on foodtstamps. U.S. runs a trade deficit of 800billion a year while Russia is running a trade surplus of $200billion a year. U.S. Forex Reserves are at $123billion vs $630billion in Russia. U.S. exports less than Germany lol, they are no match to the EU or China. Dont worry when the final collapse comes Russia and China will send food aid and meds.

Lay off the LSD. Its bad for you…

Most of the old Mig-29s have been either phased out or upgraded. Most of the Russian Mig-29 fleet are of the SMT, K and M variants, with full electronic FADEC engine control. Russian ejection seats are one of the best if not the best, the fact the pilot didn’t bail out could indicate he blacked out, Russian jets have G limiters but during training or mission they can be turned off for maximum performance.

Last edited 11 months ago by SBU are FAGS
6
Reply

U.S. aircraft are junk..its old copied nazi technology from 80 years ago with some bad americant updates. when will you learn to just buy from the East or Russia or China? they are much more advanced. also, stop drinking LSD laced coke before attempting to fly…

Remind me again which country just spent $2.26 trillion USD and 20 years to lose a war to bunch of rag head goat herders in flip flops?

… and what was the name of that WW2 leader who ended his days as charred dog food in Berlin because he was too scared of being Stalins bitch?

Last edited 11 months ago by Ulf the persistent
2
Reply

You’ll notice it’s the idiots who bought into the US bullshit and are now clinging to aircraft out of desperation … same mistakes as in Vietnam … the USA tried to train stoners and scam artists to be soldiers while every Afghan with heart and intelligence joined the Taliban. They trained and armed an army of 300,000 with no native officers and no tradition or culture of western style warfare.

So ask yourself who’s the bigger idiots … the stoners and scammers who got the US taxpayer to give them jobs for 20 years or the idiots who spent $$$$ arming and training them after making the same mistake 20 year earlier?

The more helos, jets you run the higher the possibility of an accident. U.S. military is losing around 15 jets and helos per year. Russia is catching up because they fly more with a lot more jets and helos in service than before. Its simple math. Russia has increased its fleet of helos and jets with 80units per year for the past 8 years straight.

Last edited 11 months ago by SBU are FAGS
2
Reply

Haha, and how the US obtain nuclear materials and from whom, from German scientists, and where were those scientists went DIRECTLY to the US to teach the US idiots how to make fissile materials. Both US and the Soviet Union got their Nuclear bombs from Germans Scientists, the US capture a few and the Soviet Union capture many. Both got the same at the same time. What is your issue????