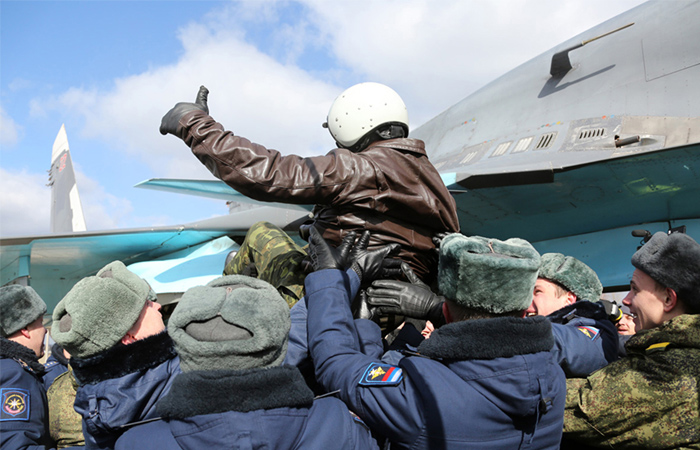 A Russian pilot is back home

On Mar.16, the second group of warplanes left the Russian airbase in the Latakia province, Syria.

“Another group of Russian aircraft took off from the airbase in Khmeimim heading to places of permanent deployment on the territory of the Russian Federation,” the statement of the Russian Ministry of Defense reads.

According to media reports citing “anonymous sources”, a major part of the Russian air grouping  will be withdrawn from Syria till the end of the week.

There have been about 70 Russian aircraft in Syria.

However, a significant number of warplanes, helicopters and air-defense systems will remain in the Khmeimim airbase in Syria. The Russian naval grouping is also located at Syria’s shores.

Furthermore, Russian warplanes are continuing to conduct airstrikes against terrorists.

SouthFront has also received information that Putin’s decision of the partial withdrawal from Syria concided in time with a regular rotation of the aircraft involved in the Russian operation in Syria. The Russian Aerospace Forces rotate aircraft at the Hmeymim airbase regularly because of a high number of combat sorties conducted by them.