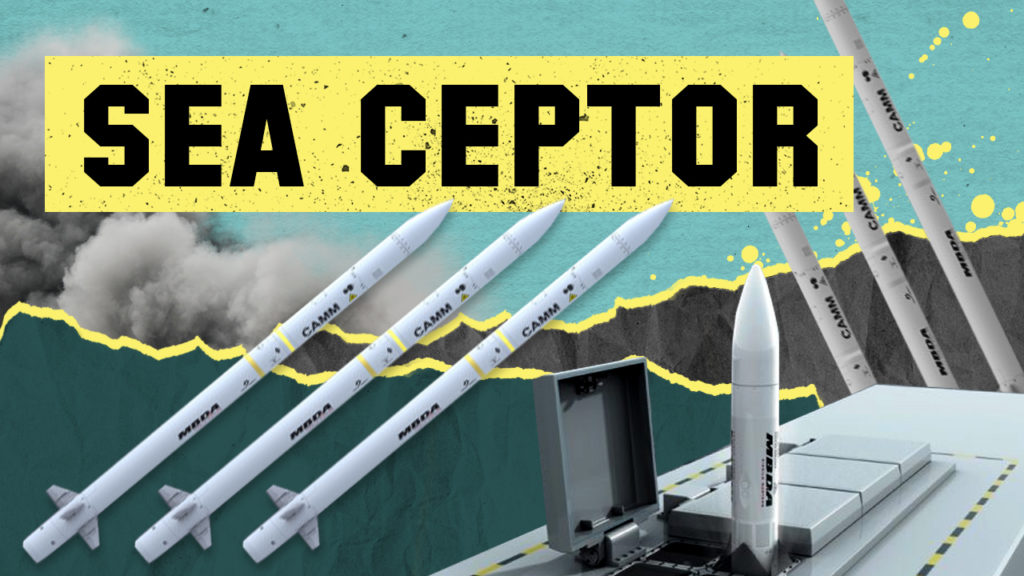 The British military leadership believes that among the means of attacking by air, the main threat to ships will be anti-ship missiles (ASATs). Thus, the greatest danger will come from the enemy’s use of air-to-surface missiles.

As a rule, the flight to the target of existing and developing anti-ship missiles occurs at low altitude and at high (in the future, hypersonic) speed.

In the mid-2000s, the need to replace the ship’s Sea Wolf SAM, which armed the Duke-class frigates, became urgent in the UK.  This was due to the short fire range (7 km in the latest modifications), which made the complex ineffective, especially when repelling massive attacks by air. In addition, it has a sufficiently large mass for the specified type of frigates, primarily due to two “Type 911” radars used for tracking targets and aiming missiles. Eventually, the new SAM was to enter service with ships that were designed under the FSC programme (FSC – Future Surface Combatant).

The command of the British Navy considered the following options: further use of the Sea Wolf SAM (GWS-26 mod. 2) before the withdrawal of the Duke-class frigates from combat service; its modernisation or creation of a new complex based on a missile manufactured by MBDA. Research has shown that it is not advisable to keep this SAM on these ships, even in the modernised version. Preference was given to the development of MBDA, which at this point proposed the project “FLAADS” (FLAADS – Future Local Area Air Defence System – a promising air defence system of a limited area). In the course of research, the possibility of placing a complex with a SAM system on board was studied, as well as the requirements for targeting and guidance systems were defined. It was planned to create a unified missile for the Navy and the ground forces, which, in turn, was supposed to provide significant financial savings during production and operation.

The economic justification for the project was presented in the third quarter of 2010, and in January 2012, MBDA signed a contract worth 483 million pounds (759 million dollars) for the development of the anti-aircraft missile. The beginning of full-scale development of the FLAADS-M SAM (named Sea Ceptor) was announced in February 2012. In May 2018, the British Navy adopted the Sea Ceptor. 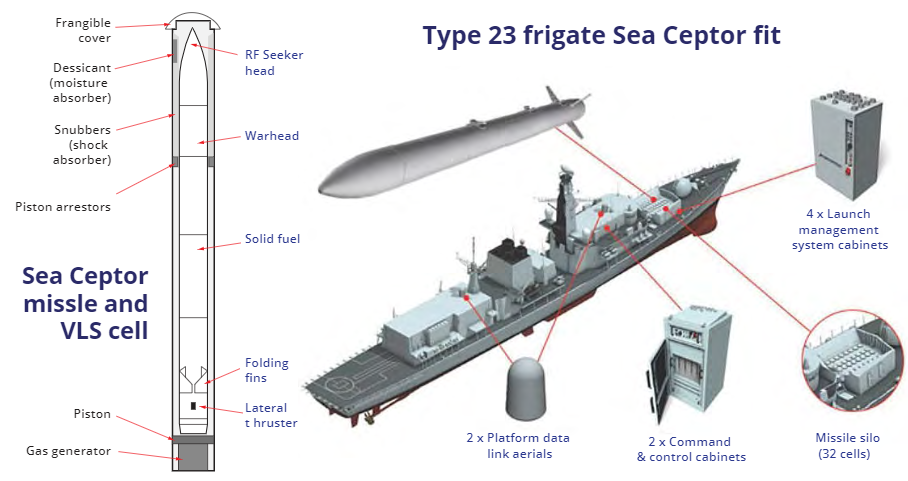 The basis of the new complex is the anti-aircraft missile CAMM (Common Anti-Air Modular Missile). It is made according to a normal aerodynamic scheme and is equipped with a single-stage solid-fuel engine of the ASRAAM air-to-air missile. An active radar homing head provides aiming the ordnance at the target in the final leg of the trajectory.

An important feature of the CAMM is the “cold” start, when a rocket with a non-working engine is ejected from the transport and launch container using a pneumatic mechanism to a height o f24-30 m. When climbing, four spatial orientation engines installed in the tail section provide its tilt towards the target. At this stage, the main engine is turned on, and the missile begins a controlled flight to the intercept point of the target.

Currently, the Sea Ceptor is being installed on Duke-class frigates, where it will replace the Sea Wolf complex as part of its modernisation. CAMM missiles are placed in the existing Sea Wolf vertical launch system (VLS) (32 cells). Their launch containers have a slight tilt over the side to minimise the possibility of the missiles falling on the deck in the event of a failure of the main engine. Lockers with launch control system equipment are placed in the same places and connected to cables as similar blocks of Sea Wolf missiles. Two-way communication equipment is installed in the bow and stern of the ship to provide guidance for missiles in the middle leg of the flight. This allows the transmission of coordinates of the target from the ship to the rocket and gets information about its condition and malfunctions.

Detection of air objects, as well as the issuance of target designation to the complex is performed by the three-coordinate radar “Artisan”. The station operates on frequencies in the 2-4 GHz band. The range of view is 0.06-200 km, the angle of the place (UM) is more than 70°, and the azimuth is 360°. The accuracy of measuring coordinates at a distance is less than 7 m, at a distance of 0.6°, at an azimuth of 0.25°.

The number of simultaneously tracked targets is up to 800. The antenna rotation speed is 30 rpm. The mass of the radar antenna is about 700 km. It is mounted on the ship’s mast.

In the future the missiles will be placed in the ExLS vertical launch system (ExLS – Extensible Launching System), developed by Lockheed-Martin based on Mk 41 elements. There will be four CAMM SDMS in a single cell of such a VLS.

This company created several variants of the launch device modules; including a single-cell SCL (SCL – Single Cell Launcher) and a three-cell “ExLS”. It is expected that two VLS (eight three-cell modules each) will be installed on prospective Glasgow-type frigates designed under the FGC programme. One installation will be located in the bow, and the other, in the central part of the ship.

Thus, in the UK, much attention is paid to the development of ship-based means of destroying air targets. In this regard, the Sea Ceptor anti-aircraft missile system was developed. The new SAM has an increased range compared to its predecessor and the number of simultaneously fired targets. In addition, the new launcher allows the placement of a larger set of missiles on the ship than the old launch platform.

These advantages make it possible to increase the defensive capabilities of the existing and prospective surface ships of the British Navy when repelling enemy attacks using various means of air attack.

Yeah, they are putting out cute toy missiles.

Their ship is one very expensive vessel,to defend such ought be defensive infastructure for strategic

balance purposes may be viable,however the law of the land is the order of the day and I guess they whom comform to this golden rule foremost are they whom deserve the victory,which i may add can never or ever has been won by the sea,unless pshycobabble rigged like they all lied about crimea then?

“The British military leadership believes that among the means of attacking by air, the main threat to ships will be anti-ship missiles (ASATs). Thus, the greatest danger will come from the enemy’s use of air-to-surface missiles.”

They haven’t learned anything, have they. Let me spell it out for you S-U-B-M-A-R-I-N-E-S and Surface to Surface missiles. What planet are you fools living on?