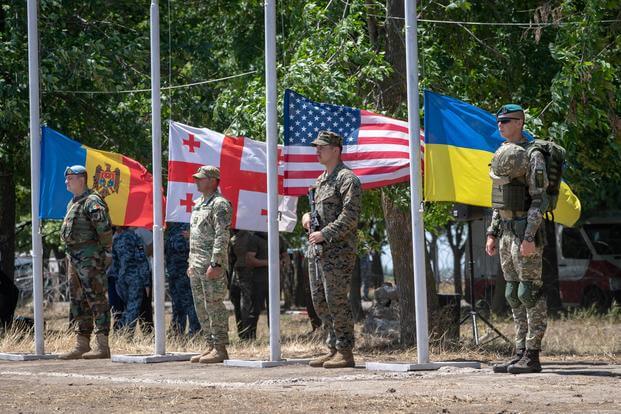 The Sea Breeze 2019 NATO military exercise began on July 1st and will run for two weeks in the Black Sea.

It also involves 32 warships and 24 aircraft.

The exercise will be a “free play” style exercise, coordinated by the multinational training headquarters.

The development of the river element will be an innovation of the current exercises. According to the legend, hostile elements will try to block access to the sea from the largest waterway of Europe, the Danube River. Coast Guard vessels will be tasked with escorting civilian transport vessels along the river, ensuring their free passage through the mouth of the Danube to the Black Sea. This training element will exclusively involve the forces of Ukraine’s State Border Service, in particular, its Coast Guard unit.

Two US warships entered the Black Sea to take part in the trials recently.

“Carney’s transit to the Black Sea and support to Sea Breeze reaffirms the U.S. Navy’s commitment to this vital region and our valued partners,” said Vice Adm. Lisa M. Franchetti, commander of U.S. 6th Fleet. “In this dynamic security environment, our naval forces throughout Europe remain steadfast and continue to operate routinely with our allies and partners in the Black Sea as we work to ensure regional stability and prosperity.”

The Russian Navy is observing the drills and the movements of the US warships.

“The Black Sea Fleet’s Smetlivy guard ship has started monitoring the U.S. warship’s steps. Besides, during the entire stay of the USS Carney destroyer in the Black Sea’s responsibility zone it will be monitored with the use of digital and technical means of the fleet,” Russian Defense Ministry said in a statement, TASS reported.

In line with the provisions of the Montreux international convention, the US destroyer’s stay in the Black Sea must not exceed 21 days, the ministry said.

National Defense Management Center of Russia said that the Russian Black Sea fleet monitors the actions of NATO ships during the exercises “to respond to possible emergencies,” RIA Novosti reported.

The Russian military deployed Bal and Bastion coastal missile systems during its exercises in the Crimea and the Caucasus coast, reports Interfax.

“The personnel of the Bastion and Bal systems conducts drills on applying conditional missile strikes on sea targets in the designated areas when deploying from the march,” reads the message of the Russian fleet.

By these NATO exercises what kind of message they wanna convey to Russia. That if Russia retaliate so how they gonna defend themselves in Black sea.

To be honest if idiots had horns so everybody would know them.

This exercise is only 1 scout group from our enormous pile of US forces and allies.

The Sea Breeze Exercise is one more example of the process that will eventually lead to confrontation between NATO and Russia. History proves buffer zones are needed: without them there is war – this case nuclear war. https://www.ghostsofhistory.wordpress.com/

In this case the Montreux international convention is the buffer. “A number of highly-specific restrictions were imposed on what type of warships are allowed passage. No more than nine foreign warships, with a total aggregate tonnage of 15,000 tons, may pass at any one time, therefore a single non-Black Sea state warship passing the straits might not exceed 15,000 tons. An aggregate tonnage of all non-Black Sea warships in the Black Sea must be no more than 30,000 tons (or 45,000 tons under special conditions), and they are permitted to stay in the Black Sea for no longer than twenty-one days”

Remember ‘Breeze’ exercise, which ended on 17 July 2014? Now what else happened that day? I wonder why NATO could provide no radar intelligence, considering they were using an Aegis Destroyer in the exercise, which focused on Air Communications, on the day the MH17 came down.

No doubt, they will be preparing some other false flag, concerning Ukraine and Russia, over he next fortnight.

Too much hubris for a false flag. They’ve been cleaning ever since the catastrophic event for that exact reason ..

The pilot who stated they took the wrong plane out. Together with the oligarch, who controlled Ukraine aviation, saying exactly the same. Plus, the pilots, who were complaining about the NATO exercise, interfering with their air communications. Now why does ‘fly by wire’ so come to mind, when NATO are playing ‘air communication’ exercises, with an Aegis Destroyer in attendance?

Off topic, but, look how the MSM are going to play the Russian submarine tragedy and no doubt, try to use public outrage to take out President Putin?

Be careful Russia, how you handle this one, because the Rothschild controlled media, no doubt believe they use this to inflame the public and find their regime change starter.

Russian media compare ‘cover-up’ of nuclear submarine fire to Soviet attempts to keep a lid on Chernobyl after it emerges 14 sailors died ‘after locking themselves in with blaze to save vessel’ 14 sailors died in fire on board vessel which is thought to be nuclear-powered But Kremlin has refused to confirm this, saying only that fire was not a gas leak Putin’s spokesman said details of the fire are classified and will never be public Wall of silence has led to comparisons with cover-up of 1986 Chernobyl disaster… https://www.dailymail.co.uk/news/article-7208041/Russian-submariners-died-fire-sacrificed-save-secret-vessel.html#comments

Owing to the media getting on board, with the story, so quickly, do believe it was a ‘false flag’, following the Israel, US, Russia meeting. Hopefully I am wrong.

US^Nato Sea Breeze Resolving Freedom exercise in Black Sea will in a show of force demonstrate for Russia and all our enemies, that we only negotiate out from a position of pure strength and balls of steel.

Is it just me, or is it palpably idiotic for any nation to “exercise” an operation in the black sea when Russia has total air, land and naval supremacy in the region? This is a list of the vassal states of the world

Yawn, another pointless, tiny exercise by America and it’s powerless vassals. Ukraine barely even has a navy.

Hmm. I wonder how a Russia, Cuba, Venezuela military exercise in the Gulf Of Mexico would be welcomed.

32 foreign warships? How is this not a violation of Article 14 of the 1936 Montreux Convention?