Spokesman of the US-backed Syrian Democratic Forces (SDF), Talal Silo, which consist of mostly the Kudish People’s Protection Units (YPG), has given an exclusive interview to the Russian Lifenews TV-channel amid tensions between the Syrian government and forces loyal to the Kurdish Democratic Union Party (PYD)  –  mostly YPG and Asayish – in Hasakah. The  interview is very interesting because it highlights the nature of the US-SDF(YPG) relations. 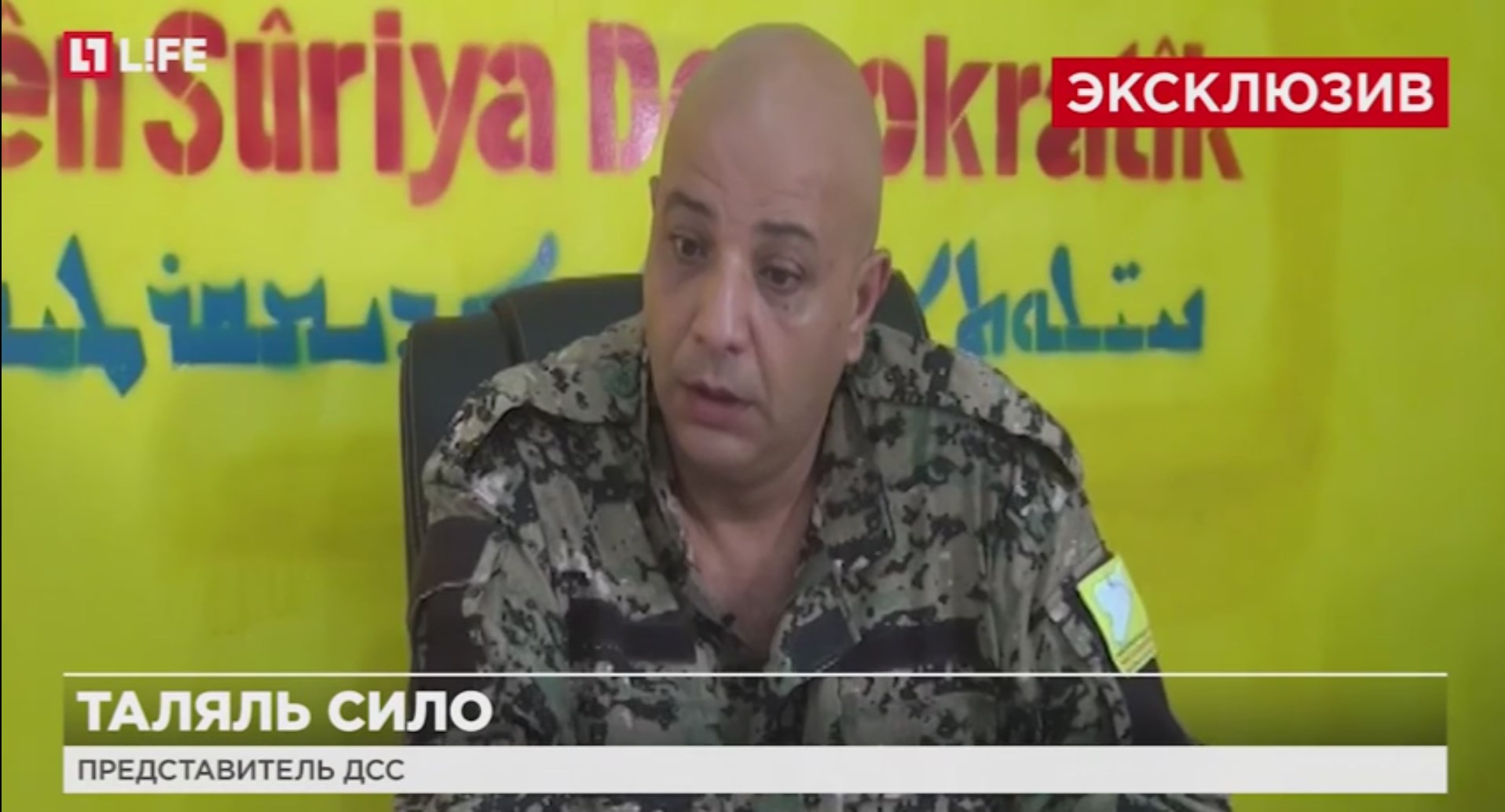 Talal Silo is a former colonel of the Syrian Arab Army (the SAA). He deserted the SAA in 2011 and lived in Turkey till 2013. In 2015, he became one of SDF commanders and later an official spokesman of the group, that western media prefers to call a “Kurdish-Arab alliance.”

In the exclusive interview to Lifenews, Silo said that the alliance with the United States has a strategic importance for the SDF and emphasized that the United States and the US-led international coalition make decisions on strategic and tactical level that the SDF has to follow. For exmaple: to avoid cooperation with the SAA and the Russians and to not attack ISIS if there is no a “signal” from the United States.

“It’s forbidden to negotiate with the Russians because we seek for an alliance with the United States. It’s impossible to communicate with any other party and to not lose the credibility of the international coalition. Of course, we are free, but we can not attack if there is not signal from the Americans.”

It’s interesting to analyze the SDF’s actions during the liberation of Manbij amid the confirmation of inability to act without “signals” from the United States.

This week, US Army Col. Carver, a spokesman for the US-led coalition fighters, has told reporters that the SDF made a deal with ISIS and gave ‘several hundred’ vehicles containing 100 to 200 ISIS fighters a free passage out of the Syrian city of Manbij. Col. Carver emphasized that the decision was made by commanders of the SDF and pursued the goal to avoid further civilian casualties. Now, it looks that Col. Carver lied. The SDF does not act without an approvement from the coalition. So, it’s the United States or the international coalition led by the United States (indeed, these are the same thing) made a deal with the ISIS terrorist group. This is a very interesting fact that Pengaton wanted to hide.

This is exceptionally brave of Silo. Kurds might not consider him part of the “tribe” soon enough.

Odd language. “We have a strategic partnership with… United States.” Who is this “we”? Usually it is a government that has a strategic partnership, and their army is part of that. But this is just an army of fighters! It does not have a country or a people! Unless of course they are trying to set up an independent country! Have the Kurds (and some Arabs) made a pact with the US to set up a separate country? It is starting to look that way. If so, US is again interfering with a sovereign nation, and breaching the international law! Kurds should negotiate, and not play these empire games!

The creation of Kurdistan requires a significant chunk of Turkey. How does the US justify their close partnership with the Kurd’s while Turkey is simultaneously at war with them? It would be interesting to see John Kerry explain that one to Erdogan.

I was it coming a long time ago. Actually, when the Kurds conquered/libererated some territories in Iraq.

This is simply the inevitable result of the strategic blunders made by the Syrian government.

The stance of Bashar Hafez al-Assad is simply untenable. He appears as if he has been punching above his weight in statements; they have been way out of touch with reality, such as the one about conquering the whole of Syria.

The Russians did scold the Syrian government and promptly distanced themselves from such statements, voicing their opposition to it… but the damage had apparently been done.

Sadly, it reveals how obstinate and delusional the Syrian government actually is.

They should have built on the previous cooperation with the Kurds. After all, they had common enemies.

The Syrian government ought to have struck a deal with the Kurds on the Kurdish autonomy (I was writing a lot about this as early as 2012); and maybe on the federalization of Syria as well; and accede to other changes and reforms, even if it meant eliminating the word “Arab” from the official name of the republic.

The Syrian government was in a perfect position to do this. They could have made the same offer as Charles III. the Simple to the Normans. It would have been a brilliant move, worthy of a seasoned statesman.

The Kurds would live under the legal protection of the Syrian government, while they would shield Syria from aggressive Turkey. Remember, Turkey is naturally an enemy of Syria, due to Turkey’s alignment with the U.S.A. and due to Turkey’s continued membership in the NATO.

And the U.S.A. is an arch-enemy of Syria, at least since the creation of the Baghdad Pact (CENTO / METO), and the failed U.S. attempts to drag Syria into it.

Obviously, the Syrian government ought to have won the favour of the Syrian Kurds. It was so easy! Obviously, the Arabs would have begrudged them, but they would ultimately have had to face it and realize that there was no other way.

The Kurds were desperate to have a nation-state. And they would have given almost anything to achieve this almost century-long unfulfilled dream of theirs.

The Syrian government could have offered it to them—at the time when Turkey was a bitter enemy and when the U.S.A. was talking about a “unitary Syria” (under the propaganda that “Bashar Hafez al-Assad must go”, so they could claim all of Syria.)

Thus, only the Syrian government was legally able to offer the Kurds what they wanted—to the outrage of Turkey and anger of the U.S.A.

But they were bloody foolish and failed to do so. In fact, they were so stupid as to drive the Kurds into the arms of the U.S.A.!

Thus, the Syrian government was the only one that could offer the Kurds some guarantees in the legal framework of international law. Not only did it fail to do so, its actions were actually counterproductive.

Who can blame the Kurds that they were pushed to grasping at the straws and that they finally grabbed the opportunity when they were presented with one? Even though the offer came from a party that cannot legally promise them anything, even though it came from a party that would use them and betray them when the were no longer useful as pawns in U.S. dirty imperial campaigns.

The Syrian government marred the hopes of the Kurds; who can blame them that they have succumbed to the lure presented to them by the U.S.A.? Even if the U.S. offers were merely false promises, they shed a glimmer of hope where the Syrian government had responded with clouds of darkness.

anticap, I think that you are the author of the Debian Antix distro, respect. Remember that Russia wants to put the Kurds in the negotiating table to make peace with Syria, offering them federalization, all this opposed by Turkey and USA.

Anticap and Boris, you have it right, although for Assad to float the idea is still a reasonable option. Maybe the reason they were denied a place at the Swiss negotiating table is because a deal has already been struck. The US helps them create Kurdistan, meaning Syria gets fractured,as well as Iraq ,Turkey, and Iran. In return the US gets a military base. And another 20 years of fighting and selling arms, and ending with a base on Russia’s southern border. Maybe Russia (and China) could host negotiations with those nations affected, make the Kurdish groups an offer more attractive than unending warfare.

Of course everyone is wondering whether there is some US involvement in what is happening in Hasakah now. Any news about that?