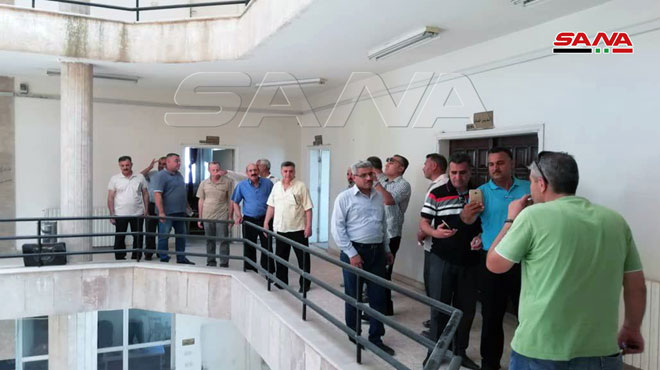 On July 11, the Syrian Democratic Forces (SDF) evacuated one of several government buildings in al-Hasakah city, which were occupied by its personnel last month.

The building, which belong to the General Administration for Grains, returned to the control of the Damascus government. According to the Syrian Arab News Agency (SANA), employees were able to access the building to resume their work.

“The headquarters was retaken and the employees returned to their posts to follow up on the work originally assigned to them,” Yusuf Qassim, director of the General Administration for Grains in al-Hasakah, told the SANA.

SDF forces occupied nine government buildings and state-owned properties on June 27. The move was reportedly ordered by the U.S.-led coalition, which is working to expand it military presence in al-Hasakah city.

The SDF decision to evacuate the General Administration for Grains is a positive step. The decision shows that the Kurdish-led group is still willing to cooperate with Damascus, despite U.S. pressure. The group will likely evacuate the remaining buildings soon.

SDF need to go fuck themselves, Syria saves them from being overrun by Turkish ISIS forces and they repay Damascus by letting the US Zioterrorist scum set up more bases in other occupied parts of Syria. The SAA must always remember that a lot of SDF success in Deir Ezzor is due to ISIS joining SDF ranks through US mediation, Damascus should do all within its abilities to undermine SDF control in occupied regions.

SDF will be contaminated, if they fuck You.

The miitary reflexions are far out too and the rest is lie.

Fuck off, ignorant twat. Your little tales that SDF is all democracy and feminism are deluded shit, and learn to read, I spoke of no military actions so stop seeing thing that aren’t there.

SDFs had to have take too much of the town area to control it. I hope this will lower the temperature a little. Hopes seeemes all to be very small there.

Of course they evacuated, after the ZioAmericans got all the documents they were looking for that is. The other buildings will also be returned after the ” job ” is done.