The Syrian Democratic Forces (SDF) announced on December 11 that its security forces had neutralized a weapons and logistics smuggling network working for ISIS.

In a statement, the Kurdish-led group said that the network was neutralized in a special operation that was carried out in the eastern Syrian governorate of Deir Ezzor. Several terrorists were captured.

“The operation was carried out to prevent flow of ammunition into the hands of ISIS cells which use them to terrorize the region,” the statement reads.

The SDF’s press center released photos showing loads of heavy and light weapons, which were seized in the course of the operation. ISIS cells in eastern Syria intensified their terrorist attacks last October, attempting to take advantage of the Turkish-led attack on the SDF.

The SDF and the U.S.-led coalition stepped up their joint “anti-terrorism” activates in Deir Ezzor over the last few weeks. However, it is not yet clear if the coalition had participated in this particular operation.

Very impressing, if true. Thank You. BUt I wonder where the weapons come from.

Could be their own warn-out stuff !!!

Parts look like warn out stuff. Old depot or depots from anybody.

The text says neutralized. To me those items could have been find after SDFs has crashed a network.

I cant believe SDFs give up weapons now. That would be quite naive,

Well stated and in good English Jens.
Makes me think that somebody else is using your account right now?

Jen’s has, for a long time, had an alter-ego who is fluent in English of course. It all fits with a dual-citizen ‘split personality’ :)

Your english is very limited Lawyers and doctors, as I leaned in Shool when I had not a single hair below.

Old stocks are all over Syria.
This is is nothing compared to some of SAA finds in the past. 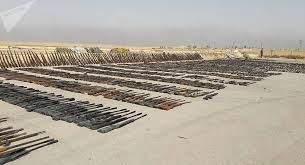 You can load these weapons in a single small truck. If these pictures are used to impress someone, I do not who.

You must need glasses. There is a lot of stuff and its heavy. Very infected to write this is to impress. They do as soldiers do and registrate it as pictures and bring it here.

You also seemes not able to conect it by, they seemes to have eleiminated a gang having them.

Assads did it by making it into a private corrupt dictator Baathist owner ship having not even a single second oppinion allowed but killed. It systematicly has not included all its citicens for decades.

One like me partly could understand, if things by that was doing fine. I dont see that at all. If You are no good Govermes, You elect someone else, whioch can speak free and try the proposed.

Not even well known systems semilar to the economical grwth for all in a partly Marxistic system is accepted as a try.

Most of those socalled Jihadists are or were not Johadists at all. The uprise was “Assad away”. The only organized systems as opposition was the non peacefull.

Kurds didnt partipied in any kind of warfare before million of Syrians already was external and internal refugees. You ignore that part too. 2 and later 2,5 millon already was refugees in the areas, where they were represented.

Your fanatic oppinon solves nothing for the 10 million Syrians being not even in their own homes as well a the rest being not. The only happy ones might be the dead ones, which finally rest in peace. You write dirt of the worst kind only and is a shame for all normal Syriens.

I wonder if the Kurds hope to stop the US smuggling of oil as well.