Directorate 4 blog noticed a peculiar thing in RT produced semi-documentary film “The Road to Raqqa”, broadcasted in September of 2017. (link to the RTD website) The text below is based on the post released by Directorate 4.

Amidst routing demonizing of ISIS and glorifying of the US-backed Syrian Democratic Forces (Kurdish militias are their core), one thing stands out. One of the centerpieces of the documentary is an interview with a male nurse of an improvised hospital in a part of Raqqa. Adham, the male nurse, tells a real tear-jerker of a story about him joining the Kurdish forces. “In Aleppo I fought against ISIS,” Adham says. “Somebody told them about me, and I was caught and imprisoned.” Then Adham tells about the tortures he had to endure. During questioning, he was tortured and beat up, in order to make him admit he had been fighting against ISIS. But he kept silent. In the end, they had Adham’s hands nailed to some planks, hanging him up by his hands. They’ve crucified him. This is quite shocking, considering you can see his hands clearly during his impassioned story, and they look fine. No traces, scars or any other damage, really. Apparently, a 150lb man was crucified with nothing to show for it. This seems pretty suspect. Adham talks how he was tortured

The suspicions were proven to be correct, when a certain media outlet published a video with what looks like Adham’s photo and information. It turns out the poor victim of Islamic State was could be a terrorist. The video shows the man that looks like Adham in the uniform and even has him holding a cut off head of an unknown person. The outlet also says that this person, while being in ISIS, fought against the opposition known as the Free Syrian Army. If confirmed, this finding could be an interesting example of how the US-backed Syrian Democratic Forces treat former ISIS members.

As I said before, they’ll change appearance and join Syrian PKK whenever they receive new garb, flags and “shaving tools” (I didn’t forget this time!) as it’s evident by this guy and most important for him, the source of his allowance didn’t change. It still comes from the US and SA.

These guys have no loyalty. If you play good, they will change side. They are all about money and power. Give them money and make them change side.

Yes, the ISIS terrorists are just part of a terror pool that the US Terror Generals dip into to relocate them in another group of terrorists.

“Apparently Syrian PKK thought this guy’s experience in cutting heads amounts to medical training”
LOL..LOL..now this made my day

Hey… give the SDF a break. Good neck surgeons are hard to come by. It was more than a hobby for this guy. Who can argue with experience?

Who am I to question experience, specially for a guy with magical healing hands?

Come on Garga, you don’t see that the photo with the hood is photoshopped? I thought you were one of the more intelligent persons here….

An ISIS member with tattoes. XD.

The ISIS followers are just lost. Most of them are thugs, criminals and lost people that USA manipulated to invade Syria. It’s called “abuse of weakness”.

For once we agree Serious.

Tattoos are haram in Islam. So it is interesting.

You’re right, the “needle” kind is but the sticker tattoos are fine as they don’t harm body much.

Why does that remind me of the White Helmets by day and Al Qaeda by night team?

white Helmets, before and after, photo. 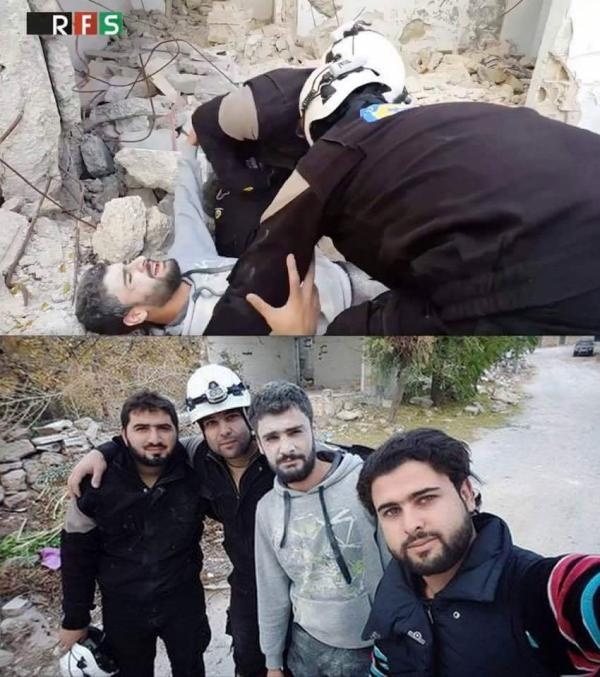 America killing Syrians and Iraqis by one or another way, the meaning is same that America is rule by terrorist evil politicians.

i think after the war is over, a special forced should be tasked with the burdain of finding this dutchers ….and then kill them silently….just as our friends the jews did with Arab terrorists that killed israeli athletes at the olympics. hunt them down like anomals and kill them one by one…..not quickly….take your time…

Hmm..This may prove very difficult..You may have to begin with top politicians in Washington, London, Riyadh and Doha

my main concern is the rats that killed innocents!like the ‘medic’ here

I actually saw this exact part in a trailer (more then a month ago I think) for that show and noticed the exact same thing!
How fucking stupid and arrogant they have to be to make such obvious lies?!

Even if Trump goes on TV and says that USA created ISIS to kill Assad, nothing will happen. Once you have done 9/11, invade Iraq for no reason, you can do whatever you want.

There is nothing called ISIS which followed a religion and wanted to form a Caliphate..These were just ordinary bloodthirsty criminals brought together by western intelligence agencies and trained in theft and murder

the story is rather doubtful.
why the man with the raised finger in the “terrorist” pic does not have any tattoo? at least the letter “m” should be visible.

I’m not even sure he’s the same man, I mean, it could be, but I wouldn’t swear on it.

to me it seems an attempt to delegitimize RT, something that has been researched painstakingly but that does come up with more questions than answers.

Of course it shows another time that the folks working 24/7 to prove RT wrong are able to come up only with bullshit or the like.

It could be either way I agree. But I would forget the tats bit, as that could easily be a stick on.

But by comparing the eyes, I am unconvinced.

I think that with some work it’s possible to find several analogue “stories”. except that the one that got published had the RT logo in it. Which makes me think it’s the initial requirement.

I must admit that I used to be more willing to believe something with the good old RT logo on, but for some reason I have become more aware of my failure to do so recently and like the MSM, I the information a little more.

Maybe I have just become sceptical in this whole bloody nonsense.

The whole “terrorist” thing is a con, it’s a proxy army, whatever they’re named, when you can no longer bring in the US or NATO forces, ….The elites in control throughout the West and probably elsewhere. bribe with $$ or “ideals”or just find plain psychopaths to do their dirty work of take over …. These folks are not called neo’cons’ for nothing.